10 Movies That Should Have Launched a Franchise 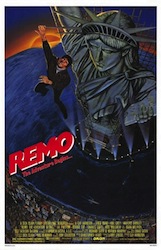 Hollywood makes a lot of sequels. Just not the right sequels.

We're coming to the end of summer, the busiest time of the year for sequels and franchise movies. In just the last few months, we've had sequels to movies that we did not need: Smurfs 2, Grown Ups 2, RED 2, Despicable Me 2, Percy Jackson: Sea of Monsters. How come we get another Smurfs movie but we can't get a second Galaxy Quest?

1. Zero Effect (1997) Man, I love Zero Effect. The debut feature from writer/director Jake Kasdan is a good mystery but a great character piece, with Bill Pullman giving a brilliant, underrated performance and Ben Stiller doing good work (back when Stiller used to do good work) as his tightly wound assistant. One of the best detective characters since Sherlock Holmes, Darryl Zero is a brilliant deductive mind and a complete social basket case; Pullman finds comedy in the craziness without ever tempering just how difficult a human being Zero really is. This is one of the best sleepers of the '90s, and deserving of its own franchise. There are more mysteries for Darryl Zero to solve. An ill-fated TV series was attempted (replacing Bill Pullman with Alan Cumming), but never really got a chance.

2. Remo Williams: The Adventure Begins (1985) The lone attempt to launch a film franchise from Richard Sapir and Warren Murphy's Destroyer series of novels, Remo Williams casts Fred Ward as an NYC cop and Vietnam vet recruited to become a secret government assassin. Just the poster, showing Remo dangling from the Statue of Liberty, should have guaranteed the movie box office success. Sadly, it was not meant to be; lukewarm critical reception and a box office gross of $12 million (against a hefty $40 million price tag, high for 1985) doomed what should have been a fun spy adventure series. The movie was done in by a lot of things, including a bad title and a yellowface performance by Joel Grey (who was actually nominated for a Golden Globe), but solid action directing by Bond veteran Guy Hamilton and a rare leading man action hero turn by Fred Ward (which apparently didn't interest an '80s audience already accustomed to Rambonian supermen) give this enough of a two-fisted, old-school vibe that it deserved at least one more installment. Who wouldn't want to watch Fred Ward grunt, snarl and punch his way through another spy adventure? This was the Jack Reacher of the '80s, right down to the terrible title. 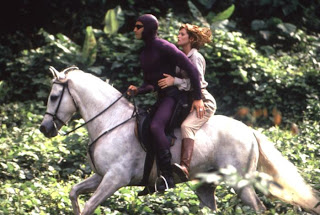 3. The Phantom (1996) Oh, The Phantom. You deserved so much better. This was a movie with hardly any audience: an adaptation of Lee Falk's serialized comic strip from the '30s about a guy who lives in the jungle and fights evil in purple tights, made before the boom of superhero movies and starring big-draw names like BILLY ZANE, KRISTY SWANSON and TREAT WILLIAMS (plus Catherine Zeta Jones, who wasn't a thing yet). But the movie is terrific: great practical stunts, a winking but NEVER SMIRKING sense of humor and one of the best villains ever. The fact that it ever got made in the first place is a miracle, so there's no way it was going to get a series of sequels. Too bad. I would gladly watch this team reunite for movie after movie, provided they're able to recreate the tone and find a way to resurrect Xander Drax. This is the movie The Lone Ranger should have been.

4. Action Jackson (1988) Though the '80s were dominated by superhuman action heroes, very few successful franchises were launched (unless you count some of the stuff at Cannon, but that's because those guys needed product; if it starred Charles Bronson or Chuck Norris, so much the better). Carl Weathers' lone starring vehicle Action Jackson deserved its own franchise; mixing James Bond, blaxploitation and supercop stuff like Cobra, the Joel Silver-produced, Craig R. Baxley-directed movie is arguably the pinnacle of '80s action cinema -- not necessarily for quality, but for how much it embraces its own craziness. The '80s had a kickass black action hero and let him slip away. Action Jackson was just released on Blu-ray. Go ahead and buy it. You'll thank me later.

5. Jack Reacher (2012) This is the newest movie on the list, so it's certainly possible (especially with foreign grosses) that we might see another Jack Reacher adventure. I don't think it's likely, especially now that it appears writer/director Christopher McQuarrie will be reteaming with star Tom Cruise on Mission: Impossible 5 instead (and, for the record, I'll take it). Diehard fans of Lee Child's novels may not have been crazy about the casting of Tom Cruise or even the finished film, but the movie is a smart procedural that takes the trope of "Tom Cruise is always awesome" to its absurd extreme and even suggests that with that awesomeness comes a good deal of dickishness -- it deconstructs the star's persona without being really winking and obvious about it. Ultimately, though, the movie works because it's intelligent and well-written, features a lot of good set pieces (like a really slow car chase) and manages to be compelling even though it reveals the "whodunit" in the FIRST SCENE. 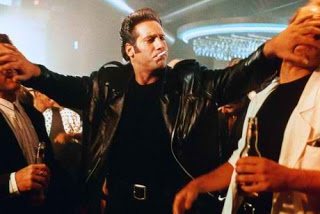 6. The Adventures of Ford Fairlane (1990) Everyone wanted this movie to fail -- including the execs at Fox, who buried the movie after a week of release. Dice was already on his way out when the movie hit theaters (in large part thanks to controversial appearances on MTV and Saturday Night Live, both of which banned him for life), which meant America wasn't much interested in a movie devoted almost entirely to his awesomeness. Ford Fairlane even won a bunch of those stupid Razzie awards, including Worst Picture, Worst Actor and Worst Screenplay for its writer, Daniel Waters. But a lot of people were so quick to hate the movie that they missed a lot of what works about it: the screenplay is self-aware and subversive, the Joel Silver slickness works well for a movie set in the MTV world and, like it or not, Dice is really good in the lead. The movie is at its worst when it bends its screenplay to match his comic persona (or, even worse, shoehorns big chunks of his standup right into the dialogue), but on the whole, it's a really entertaining early '90s action comedy. Given that it's set in the music world, it would have been interesting to pop back in on Ford throughout the decade as the musical landscape changed every couple of years. With his Elvis pompadour and whining about Jimi Hendrix, Fairlane was already a dinosaur in 1990. I'd love to know how he handled Nirvana.

7. Devil in a Blue Dress (1995) Like so many of the movies on this list, Carl Franklin's Devil in a Blue Dress finds its roots in a series of books: Walter Mosley's "Easy" Rawlins detective novels from the 1990s (there's a reason why both novel series and detective characters lend themselves so well to possible franchises). The atmosphere is great, the mystery is interesting and there are too few franchises for African-American characters. It's those characters that make us want to follow a franchise from film to film, and Denzel Washington's Rawlins and (especially) his relationship with unhinged sidekick Mouse Evans (Don Cheadle, fantastic as always) that makes me want to see more movies in the series.

8. The Incredibles (2004) Would another installment of the best superhero family movie of the 2000s have been that much different than the original? Hopefully not. Brad Bird's first movie for Pixar remains one of the studio's best -- a superhero movie that delivers on both the action (that last act is SO GOOD) and the characterization. Plus, it's Brad Bird, so it works in a bunch of interesting and complicated messages that are good for kids to hear: If everyone is special, no one is. Not everyone gets a trophy. The Incredibles still feels overly long at 2 hours +, but this is a terrific franchise in waiting if only because we would get to check in on this family every couple of years. 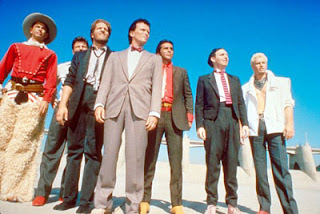 9. The Adventures of Buckaroo Banzai Across the 8th Dimension (1984) One of the few movies that's seemingly designed to be a cult film but still works, Buckaroo Banzai is the kind of insane movie that only the '80s could have produced. Part sci-fi, part comedy, part satire, part musical and ALL ECCENTRIC, director W.D. Richter's movie drops us into the middle of an elaborate mythology and expects that we keep up. The silliness of the movie butts up against the dryness of the humor in a fascinating way, and the cast is a murderer's row of great character actors: Peter Weller, Jeff Goldblum, John Lithgow, Ellen Barkin, Clancy Brown, Dan Hedaya and Christopher Lloyd (plus Yakov Smirnoff and Billy "What Did You Think?" Vera). This is a movie that sets out to be an odd kind of singularity and, to its credit, actually succeeds. The end credits promise a sequel, Buckaroo Banzai Against the World Crime League, but it never materialized. Great title. I would see that movie opening day.

10. The Further Adventures of Tennessee Buck (1988) This is a tough one. Not only do most people not think this should have been a franchise, they don't even know the first one fucking existed. Plus, the title is misleading and sounds like it's already a sequel (that's some Leonard Part 6 shit right there). Starring and DIRECTED BY David Keith, this is an Indiana Jones spoof for the grindhouse set; though the trailer promises wacky fun (and there is some), there's also beheadings and oil rubdowns and rape and murder. Keith's boozy, brawny charm and willingness to get nasty carries the movie and could certainly have carried a few more. Bring on Tennessee Buck and the Kingdom of the Crystal Skull.
Posted by Patrick Bromley at 11:40 AM

Email ThisBlogThis!Share to TwitterShare to FacebookShare to Pinterest
Labels: action jackson, buckaroo banzai, ford fairlane, jack reacher, movies that should have had a franchise, the incredibles, the phantom, zero effect