These guys deserve better than this.

Hollywood has a problem: they have no idea what to do with the actors and actresses who once turned in legendary performances but have now reached a certain age. On the other hand, those actors and actresses often seem to have a pretty hard time recapturing the greatness of their younger years. No one wins.

I’ll give you an example. Robert De Niro is, in my opinion, the mascot for aging actors in modern film and sums up the double nature of what I’m writing about this week. I can’t say he’s one of the hardest working men in motion pictures (anymore), but I can say that he appears is multiple films each year. De Niro is an actor with a reputation as one of the all-time greats and has a list of film credits that instantly commands respect. When you think of movies like Godfather Part II or Taxi Driver, Raging Bull and The Deer Hunter, you probably also think of how amazing he was in those movies.

Have you seen Awakenings (1990), in which De Niro stars opposite Robin Williams as the victim of a crippling disease that robs him of both his mental and physical faculties? The journey on which the actor takes that character is incredible and De Niro’s performance is ultimately devastating. He doesn’t play a tough guy; he plays someone so afflicted that they can’t even walk. The man is a master of his craft with talent that few will ever even think about coming close to. 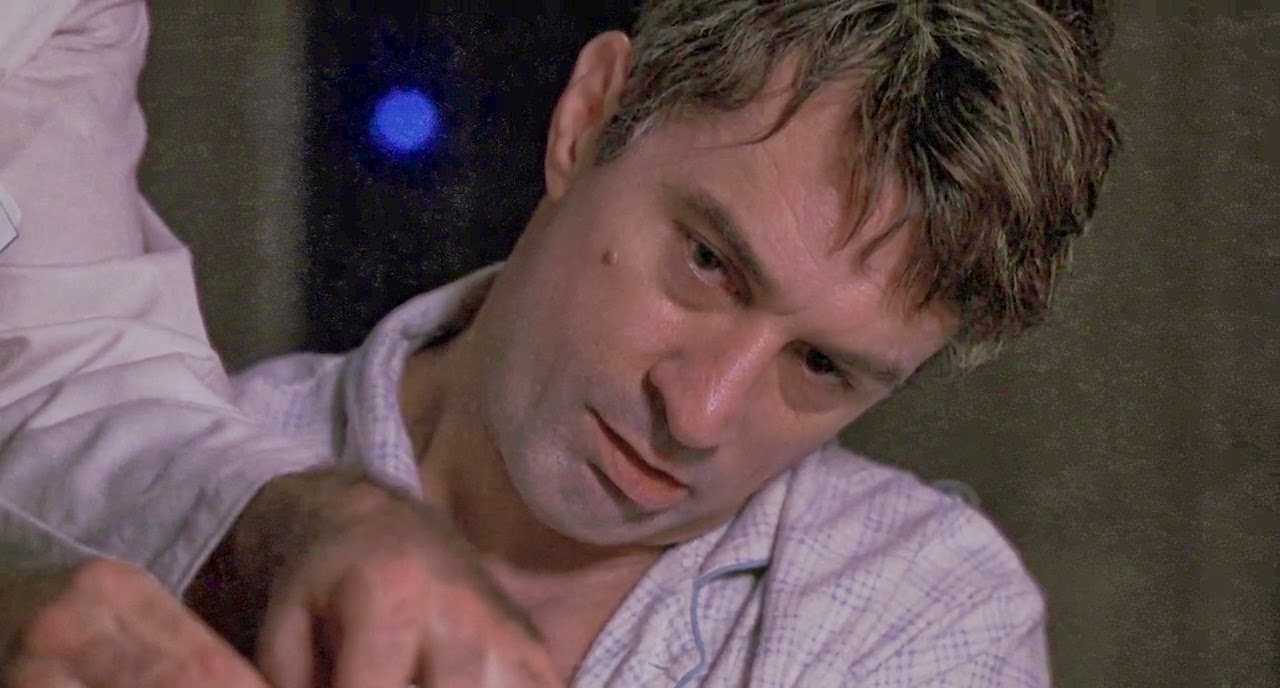 One year later, De Niro starred as the creepy rapist Max Cady in the 1991 remake of Cape Fear, once again stepping outside the box and his trademark squint to turn in a performance like we’d never seen from the actor. He completely disappeared inside the role, packing on tons of muscle and transforming his body as well as his mind. De Niro was always a method actor, often disappearing into his roles completely. His name was synonymous with the best an actor could aspire to be.

So what happened? Where is that man now? De Niro still turns in an amazing amount of film appearances each year (six films in 2013 alone) and still carries a certain amount of gravitas, but it’s just not the same. What started as a string of comedy roles in 1999 with Analyze This turned out to be a run from which the De Niro that blew my mind as I first discovered the power of film in the mid-‘90s would never truly emerge. I still like lots of performances from the actor, but it’s not the same. If pressed to reveal the last De Niro performance that really wowed me, I’d have to go back to 1995’s Heat. That’s almost twenty years ago. He’s given dozens of performances since then, but they just don’t feel the same to me. He doesn’t bring it like he used to.

And there’s a whole generation of actors who I feel exactly the same about -- men and women who once shaped Hollywood with their magic. Al Pacino ran a very similar course to De Niro. A few others: Harrison Ford, Morgan Freeman, Dustin Hoffman, Diane Keaton, Glenn Close, Jack Nicholson, Robert Duvall, even Marlon Brando in his later years. Look at their film work before, say, 50. It’s markedly different from the work that came afterward.

So is this the “fault” (as if these actors owe anyone anything) of the performers, or is it Hollywood and the studios not knowing what to do with stars who are no longer in the target demographic of young adult viewers?

I think it’s a combination of both.

Last Vegas is a perfect example of the problem. On paper the film stars a pretty stellar cast: the aforementioned De Niro and Morgan Freeman as well as Kevin Kline, Michael Douglas, and Mary Steenburgen. All of these actors are people that I respect a lot and who have been in some of my favorite movies. 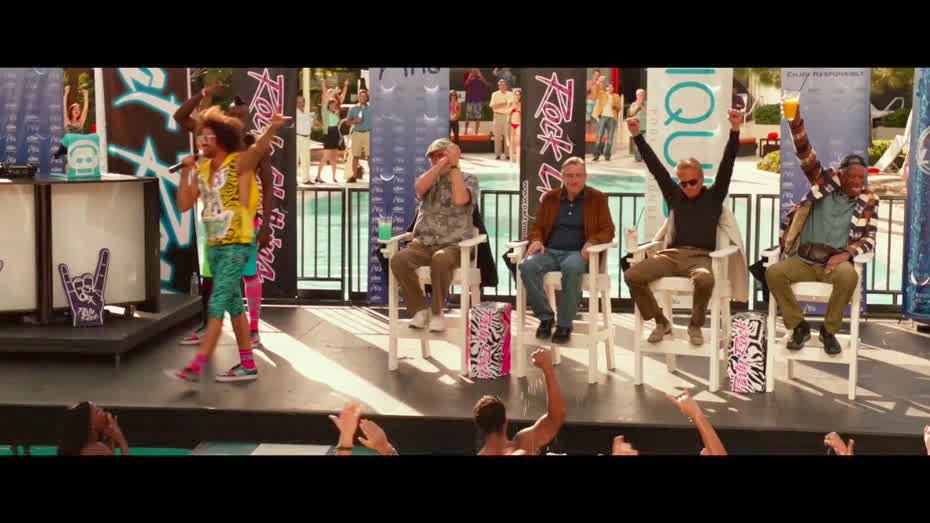 But the writer (Dan Fogelman) and the director (John Turteltaub), who both come from Disney, have NO IDEA what to do with an adult cast and grown-up themes. Apparently when you’re in your sixties all you want to do is shag 19-year-olds and dance to techno music OR lay around in a bathrobe feeling sorry for yourself. Last Vegas isn’t sure which one, but old people are so eccentric and cute. The film also treats these characters in their mid-60s like they are 85. Occasionally it stumbles onto a few poignant moments by accident, but is quick to throw music by LMFAO and Viagra jokes at us before we get too close to a real moment. I don’t know who the movie is for, and neither does Last Vegas.

This confirms that Hollywood doesn’t have any clue what to do with older actors. We get the occasional Diane Keaton romantic comedy with a generic name like Because I Said So or Something’s Gotta Give or Close the Window, It’s Raining in which she stumbles awkwardly into relationship with *insert actor over 60 here* and has wacky interactions with her bossy adult children who just might be able to learn something from her if they stop their busy lives to listen.

For most of these actors, I have to imagine this is Movie Hell. You spend your entire life pushing your artistic limits and striving to create real drama only to find your later years filled with roles which require you to constantly degrade yourself and play into broad, tired archetypes.

So there don’t seem to be very many dramatic roles for actors of a certain age, but are those actors capable of the same performances of their youth? Sometimes it seems like they just don’t care. And I have to admit, I’m only in my mid-thirties and I care less than I ever have about what people think of me. Is that what’s happening here? Does De Niro just not care anymore? Is he tired of pushing himself into those weird, dark, uncomfortable places (like the back of a Volvo)? Has he had enough of that and now wants to spend his later years in more comfortable roles that don’t require the stretching and discomfort of those from his past?

I mentioned Al Pacino earlier, and he’s a perfect example of not giving a crap anymore. This formerly-quiet dude who used to have a lot in common with young Woody Allen has been barking like a dog for over 20 years. It’s weird. I wish that YOUNG Al Pacino would come tell OLDER Al Pacino that he’s out of order, this whole TRIAL is out of order. I mean, it’s fun, and I’m glad he’s having a good time and doing what he needs to do, but there’s no range at all there. Since you asked, the last performance I really dug by Pacino was Insomnia from 2002. He gets extra credit for his role as Phil Spector in David Mamet’s TV movie last year. He was really trying to do something there, and I appreciate the effort, sir. And the hair. 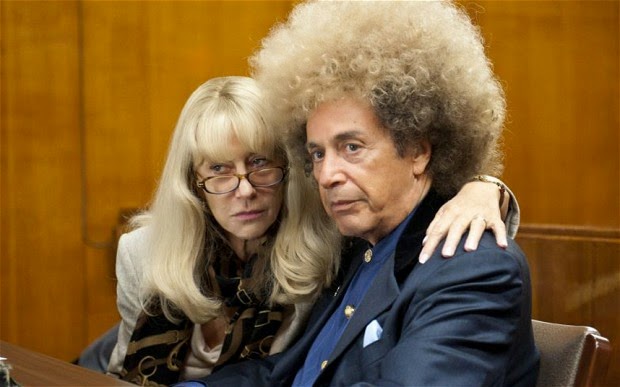 Like these actors, we all change as we get older. We get tired of the same battles, and…let’s face it, most of us decline. Quentin Tarantino swears he’s going to retire soon because he doesn’t want to be an old director who has lost what makes him special. And QT is right, because older directors almost never match the success of their work from when they were younger. The same is true across the board. Musicians can’t recapture the fire of their youth, even when they keep going. The Rolling Stones, as much as I love them and as awesome as it is that they’re still touring, will never recapture “Exile on Main Street.” Is the same true for actors? Can an actor ever really recapture the spirit of their greatest hits? It seems like the answer is no -- though I do want to give a thumbs-up to Robert Redford, who is DOING IT. He went away for a few years but he’s back and seems to have lost nothing.

But Redford is an exception, and as I said in the tag line, these men and women deserve better than this. De Niro’s appearance in American Hustle is breathtaking. There are no incontinence jokes and no campy smirks or grimaces. His performance carries weight; it feels threatening and intense. Now if only we could get that level of performance on a regular basis instead of five-minute appearances.

I guess that would require more from all parties involved: it would require better scripts and stories, and it would require studios to care more about demographics other than the coveted “young adult” bracket. It would require these actors and actresses to push harder and dig deeper and maybe even produce content to star in themselves. That’s asking a lot from everyone, particularly for actors who are likely in their final 20 years and want to relax and take it easy. I understand this. Really. 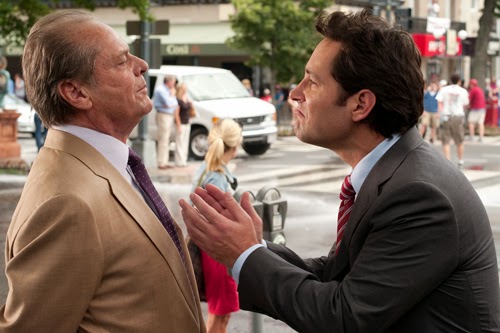 At the end of the day, I love movies and I love those who make them. I love actors and I love the way an incredible performance breathes life into something that previously only existed on a flat page. These people I’ve named are cinema’s heroes, the legends of the silver screen. All I really want is for their legacies to remain strong and untarnished and for them to continue to breathe life into the characters they portray.

It seems like we’ve lost something in recent years, and in Hollywood’s rush to capture the dollars of young audiences they’ve short-changed the generations that made Hollywood the place it is today. It’s not too late. Write great stories for these great actors and give them a platform to do what they do better than anyone. Make them an offer they can’t refuse and see if that makes a difference to the almighty bottom line.
Posted by Patrick Bromley at 11:41 AM