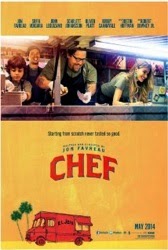 Unlike Favreau's last couple of movies, Chef feels personal and not made by committee. It’s a pleasure to watch, which is a relief because otherwise it would be insufferably navel gazing. Also, the movie made me extremely hungry. Seriously, eat a dinner before seeing Chef. Popcorn and candy will not be a substantial enough snack while watching it. I’m not kidding. This can be a problem. I once watched Julie & Julia at home and found myself eating spoonfuls of potato salad out of the container. I had my clothes on, too, which made it even weirder.

It’s undeniable that Chef is writer-director-star Jon Favreau's statement about his career. The parallel of the lead character, a down on his luck chef getting back to his roots, and Favreau, an artist getting back in touch with character driven independent filmmaking, is interesting and possibly inspiring. I’m just worried that particular subtext might be bullshit. 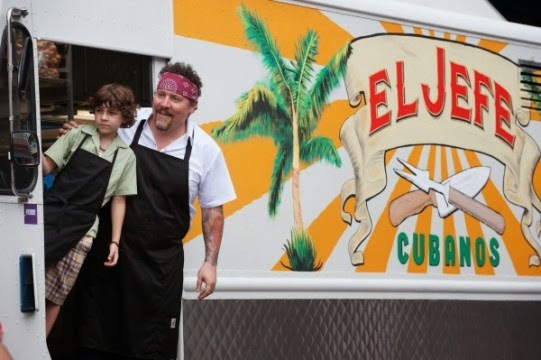 The plot in brief: Carl Casper (Jon Favreau) loses his job as the popular chef of a trendy Los Angeles restaurant after refusing to again compromise his artistic integrity and put out a boilerplate but popular menu. Down on his luck, Carl heads to Miami with the help of his line cook friend from L.A. (John Leguizamo), his ex-wife (Sofia Vergara) and his young son (Emjay Anthony) and starts up a food truck in an effort to recapture his passion for being a chef. There’s a whole subplot about Carl reconnecting with his estranged family, too. It couldn’t be too estranged, though. They bought him a fucking food truck! (Note: I appreciate the touch that Favreau and Leguizamo still curse on the job despite the kid becoming part of their staff).

Chef is a comedy that’s not super funny but still enormously watchable and entertaining. I only laughed out loud twice, but I had a smile on my face for most of its two hour runtime. That’s cool by me. I’ll take pleasant over hilarious sometimes. I just wish they dropped all of the Twitter-speak used in the movie, which is going to date it quickly. It gets to be a bit much when you hear characters saying “You’re trending bro,” “It’s out there” and “It’s gone viral.” There are even a couple of moments with little birdy sound effects when a tweet goes out. Ugh.

Though he could never be considered an auteur, Favreau turns in a solid directing effort here. He’s a better writer than director. The nice thing about Favreau is that he’s smart enough as a director to get out of the way and let his actors take over the movie. The performances are the best part of Chef: Favreau is charming and affable in the lead and gets strong performances out of John Leguizamo, the underrated Bobby Cannavale, Dustin Hoffman (who has an interesting character and some of the best scenes in the movie), Scarlett Johansson (distractingly still in her Under the Skin hairstyle and makeup) and the invaluable Oliver Platt as a food critic. That dude is amazing. The movie also has a single scene with Robert Downey Jr. which does nothing to change my mind that he’s the most smug and self-satisfied actor ever. I want to punch him in his iron heart. 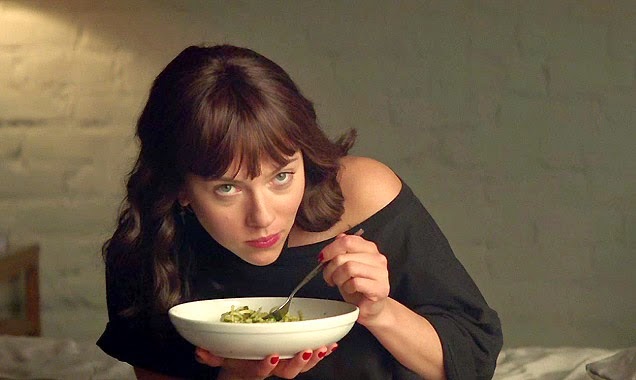 Chef has one scene that I absolutely love. It’s when Favreau goes off on Platt at the restaurant, shouting at him about the effort and work he puts into even the impersonal food (the Cowboys & Aliens of the world). The movie is arguing that we shouldn’t dismiss those entirely. Platt’s response later in the movie is great because it understands people who critique. Most don’t want to bash something, but they have a duty to report how they honestly feel -- especially when they’re disappointed that one of “my guys” (i.e. someone they supported or built up in the past) is capable of more and wasting their talent. The scene is great at capturing how artists and critics interact even if they are not explicitly saying these things to each other in real life. That dynamic is extremely interesting.

If nothing else, Chef is worth seeing because it’s a good movie about work. It’s cinematic to have characters discussing and doing what they are great at. Also worth noting is that the movie is beautifully shot and has a great amount of style. The cinematography by Kramer Morganthau (Thor: The Dark World, Fracture) is gorgeous. Miami, New Orleans, Austin and Los Angeles look as good as they possibly could on film in Chef. It’s worth seeing the movie in a theater just to enjoy the photography. I also enjoyed the party-time energy the whole movie has -- especially in the second half, with lots of live music and a colorful production design.

Chef reminded me of a recent Q&A I saw at Ebertfest with Spike Lee. He was talking about west coast and east coast film schools and how, if you look at the alumni of USC, UCLA and NYU, you’ll notice that if you want to make big Hollywood movies you go west and if you want to make small, character-based movies you go out east. Favreau strikes me as a guy who lost his way. A product of New York and Chicago, he seems to be an east coast guy at heart but was enticed by the bright lights of Hollywood. The guy who wrote Swingers and directed Made evolved into Brett Ratner. Favreau became the journeyman director of no particular calling behind such movies as the Marvel-driven Iron Man and Iron Man 2, the wholly impersonal and dull Cowboys & Aliens and the atrocity that was the script for Couples Retreat. Chef feels like a natural progression of the guy who made Swingers, Made and, to a somewhat lesser extent, Elf. I’ve never seen Zathura, so I don’t know where that fits in except Jumanji. 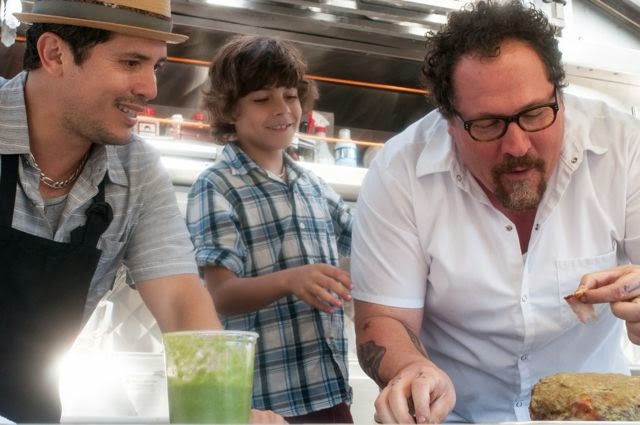 I want to be hopeful that after Chef, Favreau will stick to his guns and make witty, character-based comedies going forward. But considering that his next movie is a retelling of The Jungle Book, I’m not so sure. Is he taking a one-for-them, one-for-me approach? I hope he is. If not, he’s a bit of an asshole for making a movie bemoaning his compromised artistic integrity. I was down on Favreau before Chef but I’m back in his corner...for now.

*Note: Gene Siskel once said: “Is the movie that I am watching as interesting as a documentary of the same actors having lunch together?” In the case of Chef, you don’t have to choose one or the other.
Posted by Patrick Bromley at 7:35 AM