Drunk on Foolish Pleasures: Plunder Road and the Rules of Film Noir

Plunder Road was released more than 50 years ago, but modern screenwriters could take a lesson from Steven Ritch’s screenplay; it is a model of pacing, structure, and concision. The film runs a lean 71 minutes. Many reviews of Plunder Road describe the film’s action as “taut.” I can think of few films from the last twenty years that would earn the adjective “taut.” When was the last time a modern film ended, and you were surprised that it was over already? “Always leave them wanting more” is a lesson forgotten by most modern entertainments.

The Plot In Brief: Five men (played by Gene Raymond, screenwriter Steven Ritch, Wayne Morris, Elisha Cook Jr., and Stafford Repp) stage a daring railroad robbery in the middle of a thunderstorm, using nitroglycerin and a crane truck. They get away with ten million dollars in gold from a shipment intended for the US Mint. Gold is very heavy, and their haul weighs almost nine tons. How will the men transport this immense load and get it safely past the police and across the border? 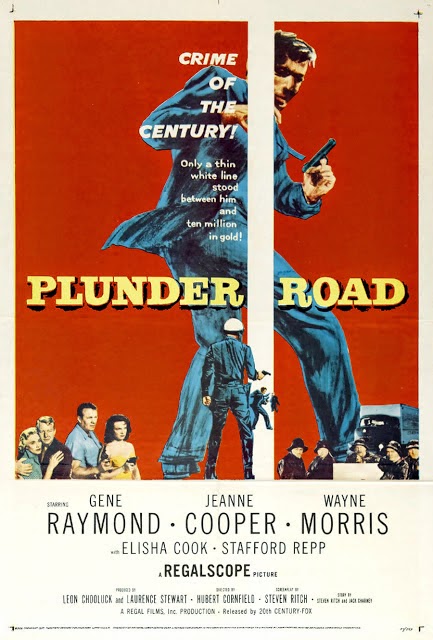 Though I’d never seen the film, Plunder Road did something right away that really impressed me: it started in the middle. A rarity for a 1950s film—much less a film noir, which often spend a lot of time at the outset establishing mood and a noiry-noir atmosphere—Plunder Road uses what might be the climax of a more conventional film as its opening sequence. Everything we need to know about our five armed men is revealed to us in the first twenty minutes through their actions and reactions. I always ascribed this trope (used so well in Raiders of the Lost Ark) to the James Bond films of the 1960s, which often seemed to start with the final scene from some other adventure that didn’t get its own movie. (Think of the way Bond blows up a chemical plant and foils an assassination attempt— “Shocking!”—before the opening credits in Goldfinger.) Clearly, 1957’s Plunder Road got there first.

Which is not to say that Plunder Road is 100% certified original and groundbreaking. Lifts and borrows from earlier, better films are on abundant display. It is as if Ritch put some of his favorite heist and action sequences in a blender and set it to frappe: we get a key action sequence filmed in a torrential downpour, as in Seven Samurai (1954); a largely silent heist sequence straight out of Rififi (1955); and, most tellingly, the tale of desperate men hauling difficult cargo across hostile territory from Wages of Fear (1953). Plunder Road has more than paid back these sequences on loan by influencing later films (like Goldfinger) not only with the “climax as exposition” that I mentioned previously, but also with the plot device of how to hide stolen gold. David Mamet also seems to have been influenced by Plunder Road in his terrific caper film Heist.

Plunder Road is beautiful to look at. The blacks are rich and inky, and many of the locations ooze with authenticity and sleaze. Some of this is surely due to Olive Films’ recent restoration for Blu-ray release, but even more of the credit should go to cinematographer Ernest Haller. I was so taken with the look of this film, I did a little research into Haller’s career and was astounded and impressed by what I found. In a career that spanned more than forty years, Ernest Haller photographed more than 180 movies and television series; highlights include Jezebel (1938), Dark Victory (1939), The Roaring Twenties (1939), Gone With The Wind (1939), Mildred Pierce (1945), Rebel Without A Cause (1955), Whatever Happened to Baby Jane (1962), and the pilot episode of Star Trek (1966). Plunder Road could be used in a cinematography class to demonstrate how a black and white film should look.

The cast is uniformly excellent and another reason to recommend the film. I was not familiar with a majority of the cast before screening the film, but that actually works in the film’s favor. These desperate men are strangers to each other and also strangers to the audience. Gene Raymond is a solid lead; he reminds me a little of Richard Denning in Creature From the Black Lagoon, handsome but in an untrustworthy way. Elisha Cook, Jr. appears performing his specialty, “Sweaty Nervous Guy;” he was also in the seminal noirs The Maltese Falcon and The Killing.

Jeanne Cooper appears briefly as Raymond’s love interest; she is most famous for her forty-year career on television’s The Young and the Restless. Stafford Repp also appears in one of his earliest movie roles. He later played Chief O’Hara on the old Batman television series, but in Plunder Road he proves that, in real life, he did not have that outrageous Irish accent.

With one exception, Plunder Road seems to be a primer for film noir – it is dark in its atmosphere, brusque in its dialogue, and cynical in its execution. The exception is that Plunder Road has no femme fatale (which, I suppose, is why it has no Marie Windsor.) In fact, the two women who do appear in Plunder Road (a waitress and the girlfriend) have such nothing parts that one can easily imagine the film with no women at all. It feels as though even Cooper was added at the insistence of some studio exec who felt that “every picture needs a dame.”

Also, in Plunder Road, as in most noirs, the grandest plans are undone by the most mundane circumstance. From the very beginning, we can tell things won’t go well; the art is not in how the plan proceeds, but in how it unravels.

This is the third of my noir columns (in a proposed series of 112) and, perhaps because Plunder Road is such a noiry-noir noir, I feel ready to suggest a list of rules for this slippery, doom-riddled genre. Here then, are the Rules of Film Noir:

1.    The character with the least dialogue will die first.

2.    The character with the biggest dreams and hopes will surely die next.

3.    The smallest trivialities will cause the whole scheme to fall apart.

5.    Every night in every city in America, the streets are wet with rain.

6.    Adding Marie Windsor to the cast improves every film noir.

9.    If the men seemed doomed from the very start, they are.

10.    Nothing good ever happens at night. Or really in the day, either.

Any readers who want to suggest additional “noir rules” should feel free to add them to the comments section below. It’s time I put on my trench coat and fedora, holster my .38, and go looking for some trouble… or a dame… or a troubled dame. Or maybe I’ll just sit here in the dark and watch the rain.

Trouble usually finds me.
Posted by Patrick Bromley at 12:05 PM