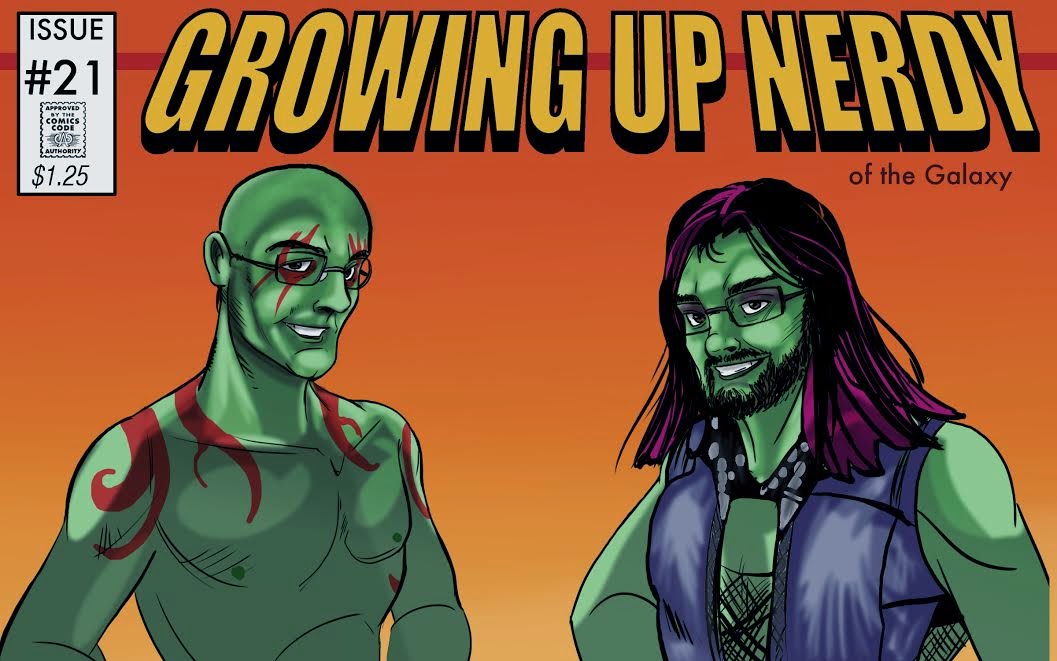 The Nerdy boys tell you everything you need to know before you see Guardians of the Galaxy.

With Guardians of the Galaxy coming out, I’m a bit nervous that I won’t know all of these new characters. What should I do?

Adam: Fear not, citizen. The mighty Growing Up Nerdy is here to save you! The “space” aspect of the Marvel comic world can be very overwhelming. Those of who you regular readers of this column know that I have quite the hard-on for DC. However, I can give credit where credit is due by admitting that Marvel does a better job with Outer Space.

DC is very disconnected, with a lot of different species and planets and almost no rhyme or reason to what they have. Marvel, on the other hand, seems to have a good grasp on what the “universe” of Marvel looks like. Before I get started on this I want to be clear that it’s nearly impossible to stay completely current with all of this and, more importantly, we all know that movies tell different stories than comics. With that said, you may get something different in the movie than what is presented here.

Additionally, I haven’t seen Guardians of the Galaxy yet and there may be some characters I don’t even have in here or ones that shouldn’t be here. With no further delay I present:

The F This Movie! Guide to All Those Crazy Marvel Characters

The Marvel Unviverse is made of four major empires and some significant alien races: 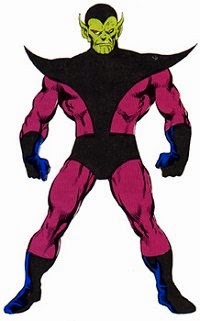 The Skrulls: Reptilian creatures with big ears, these guys are green shape shifters. They have battled on numerous occasions with the Kree. Currently their homeworld was destroyed by Galactus (the purple guy, not the cloud). Found in multiple Marvel comics, but mostly the Fantastic Four. (Famous Skrulls: Superskrull)

The Badoon: Another reptilian race. The Badoon are sexist. The women and men hated each other so much they decided to live on different planets in the same star system, only seeing each other to mate. The men are extremely aggressive while the women are pacifists. Hey! I know it’s a sterotype, but I didn’t write it. 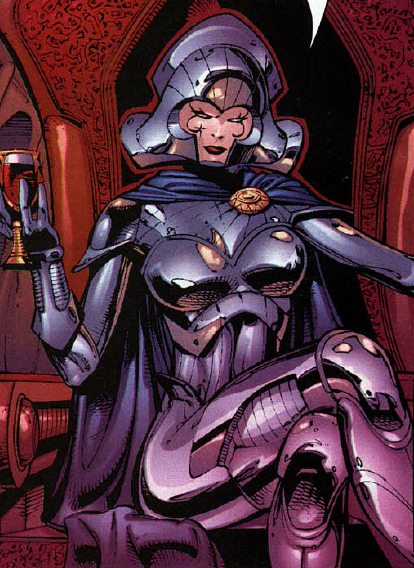 The Shi’ar: Expanding over many galaxies, the Shi’ar Empire is more of an economic cooperative of many races, with the people of Shi’ar bloodlines having a bit more influence. A Shi’ar native has feathers on their his/her head, hollow bones and is very strong. They lay eggs, as they evolved from birds. With all that said, they look very human and are ruled by a royal family. (Famous Shi’ar: Gladiator and Lilandra)

The Kree: The Kree look just like humans except they are blue and hail from the planet Hala. They worship a being called the Supreme Intelligence and are very proud, nationalistic and warlike. They are slightly stronger than humans and like to genetically engineer badasses. Found in all Marvel comics, but most famously The Avengers. (Famous Kree: Captain Marvel)

The Spartoi: The Spartoi bloodlines can be traced to Shi’ar descent and hail from the planet Spartex. They are a relatively peaceful race that rule over a few hundred worlds and races. (Famous Spartoi: Starlord)

The Nova Corps: Pretty much Marvel’s version of the Green Lantern Corps. They are a group of ordinary individuals selected by the Nova Corps to be galactic policemen/crime-fighters. Led by the individual known as Nova Prime (played in the movie by Glenn Close).

J’son of Spartax: An alien from the planet Spartax and a member of the royal family. He crash lands near a farm on Earth, immediately pulls a Kirk and bones an Earth woman named Meredith. He knocks her up, fixes his ship and leaves. A real stand-up guy.

Meredith Quill: An alien crash-lands in her back yard and she decides to have sex with it. The alien (J’son) and her have a brief romance and ends with J’son leaving her pregnant with a half alien child. She is later killed by a member of the Badoon. 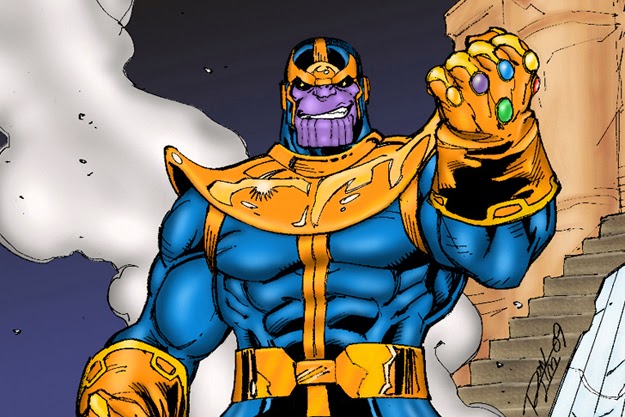 Thanos: The baddest of the bad. Thanos was born on Saturn’s moon Titan and is actually a physical deformity from the rest of his race (Eternals). Growing up a pacifist, Thanos eventually falls in love with the physical embodiment of death (Mistress Death). Constantly trying to please Mistress Death and win her love, Thanos kills his family and eventually gets hold of the Cosmic Cube and Infinity Gauntlet…. Bad stuff happens. (Played by Josh Brolin) 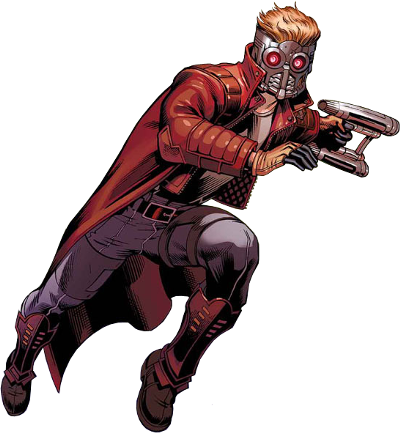 Starlord (Peter Quill): Peter Quill is the son of both J’son and Meredith and unknown to him, a decendent of the Spartax royal family, leader of the Spartoi. He encounters an alien/entity known as the Master of the Sun and is given a ship called “Ship”. Starlord becomes the leader of the group known as The Guardians of the Galaxy. (Played by Chris Pratt) 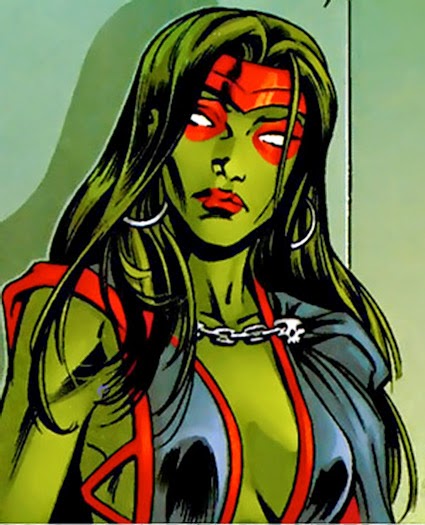 Gamora: Known as the “The Deadliest Women in the Galaxy” Gamora is the last member of her race called the Zen Whoberi. She has super strength and a healing factor. She was found as an orphan after her people were killed by the Badoon (or the Magus depending how old you are) by Thanos and raised to be an assassin. (Played by Zoe Saldana) 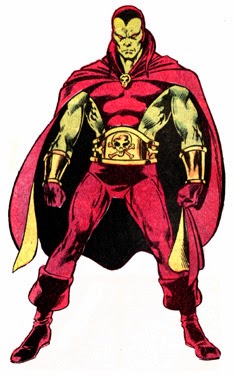 Drax the Destroyer: His original name was Arthur, a human whoes wife was killed by Thanos. A being know as Kronos took Arthur’s mind and placed it in a very powerful body with the sole purpose of killing Thanos, renaming him Drax. Drax originally had force blasts from his hands and flight, but newer versions do not have this. (Played by Dave Batista) 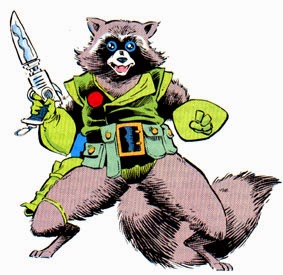 Rocket Raccoon: Okay, I’m not kidding about this. Rocket was originally a normal raccoon from the planet Halfworld. The planet Halfworld is a home for the mentally ill. No one from this planet wanted to take care of the inmates, so they genetically manipulated animals to walk upright and have human intelligence. Rocket cruised the universe with his friend Wal Russ (you guessed it, a walrus) in his ship the “Rack 'n Ruin” until he met up with Star-Lord on a mission to defend the Kree. Super smart, expert marksman. (Played by Bradley Cooper) 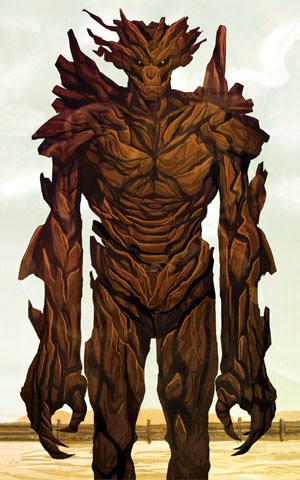 Groot: Groot is a giant tree person from the Planet X whose language is impossible to understand. Groot did not get along with the other tree people of Planet X and was exiled. He got in some trouble with the Kree but met up with Starlord and Rocket Raccoon (his best friend) and earned his freedom. He now fights with the Guardians of the Galaxy. Not bad for a guy who’s original origin was being capturing humans to be experiment on until he was defeated by termites (yep, still not kidding) (Played by Vin Diesel) 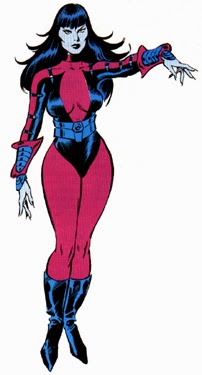 Nebula: Okay, she’s not as bad as Thanos, but she’s still pretty bad. Essentially a blue skinned pirate (probably of Kree decent), she takes control of one of Thanos’s old ships known as the Sanctuary II. She then terrorizes the galaxy in the ship claiming to be Thanos’s granddaughter. (Played by Karen Gillian) 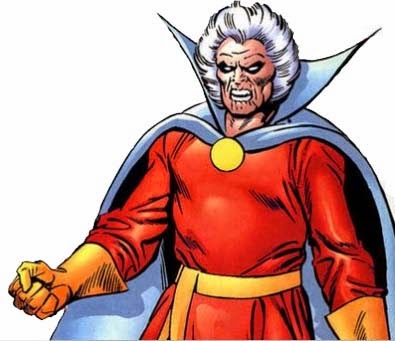 The Collector: The collector was an immortal being around since the beginning of the universe. His family eventually decides they no longer want to be immortal and die. The Collector then spends his days collecting rare objects from around the universe, including infinity gems. Think Stan Lee was around a lot of comic dorks when he created this guy? (Played by Benicio Del Toro) 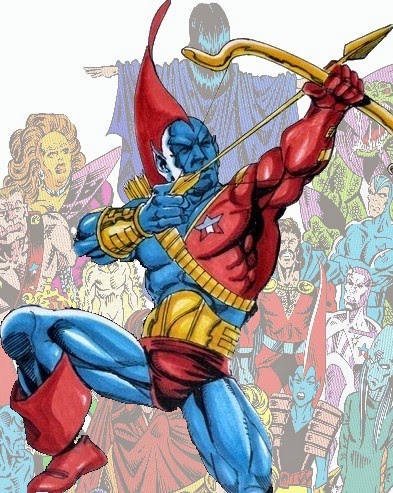 Yondu: Technically, Yondu is from the year 3000. Yondu is from the planet Centauri IV, the first planet outside our solar system to be colonized by humans. He eventually goes back in time and is part of the Guardians of the Galaxy. He has a mythical “sixth sense” and has a hard time speaking English. (Played by Michael Rooker).

Infinity Gems: These gems are the physical embodiment of the universe. They are Time, Space, Reality, Mind, Power, Soul. When someone controls all of the gems, they essentially become god and can do whatever he or she pleases.

I’m really curious to see how the writers dealt with all of the different characters in Guardians of the Galaxy. I know after you see the movie, some of you might want to read some of the Guardians of the Galaxy comics. The older ones are hard to come by, even in reprints. I would suggest the re-release of the book by Brian Michael Bendis and Steve McNiven.

Mike: Since I have absolutely nothing to add of any significance to the Guardians of the Galaxy discussion like my partner Adam has done, I’m instead going to draw inspiration from our fearless leader Patrick, who recently declared on a podcast that he’d love to have crazy alien sex with Gamora of the Guardians of the Galaxy, played by the sexy Zoe Saldana. So without further delay, and because no one asked for it, here are my Top Three sci-fi women that I’d like to spend the weekend aboard a Starship with. 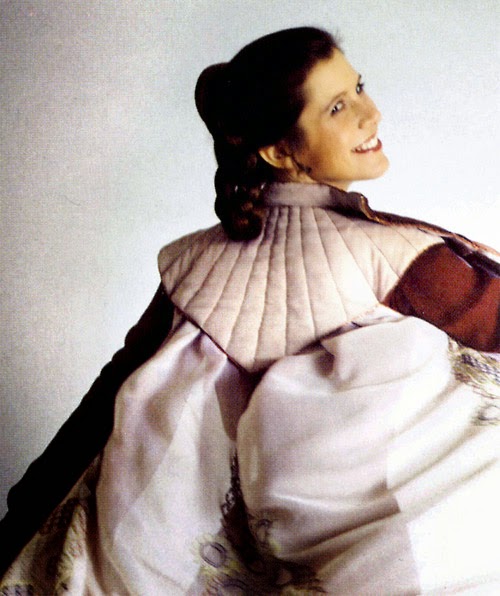 1) Princess Leia (Star Wars): I know, I know. Of course Princess Leia. But of course Princess Leia. Like so many nerds out there, Princess Leia was my first crush (to be fair, G.I. Joe’s Scarlett was early on as well). The only question would be: which version of Leia should I choose? I know the obvious answer is “Slave Leia” from Return of the Jedi, but Leia on Bespin would probably be my choice. She truly does belong among the clouds, Lando. 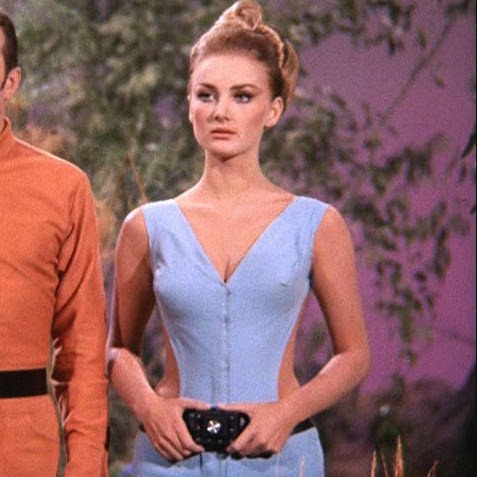 2) Kelinda (Star Trek: The Original Series): As I’ve mentioned numerous times in the column recently, I am currently in the throes of a Star Trek love affair, having watched almost all of the Original Series over the last month or so. Every other episode is graced by a beautiful woman that Kirk will inevitably have sex with, claiming the lives of his crew were at stake if he didn’t. So while I could make this list four pages long of nothing but Star Trek alien women, I’m going to narrow it down to Kelinda, played by Barbara Bouchet in the episode "By Any Other Name." Why did I chose her, you ask? 1) She’s beautiful. 2) Google scenes from her 1972 movie Amuck (I’m looking at you, Doug). You’ll thank me later. 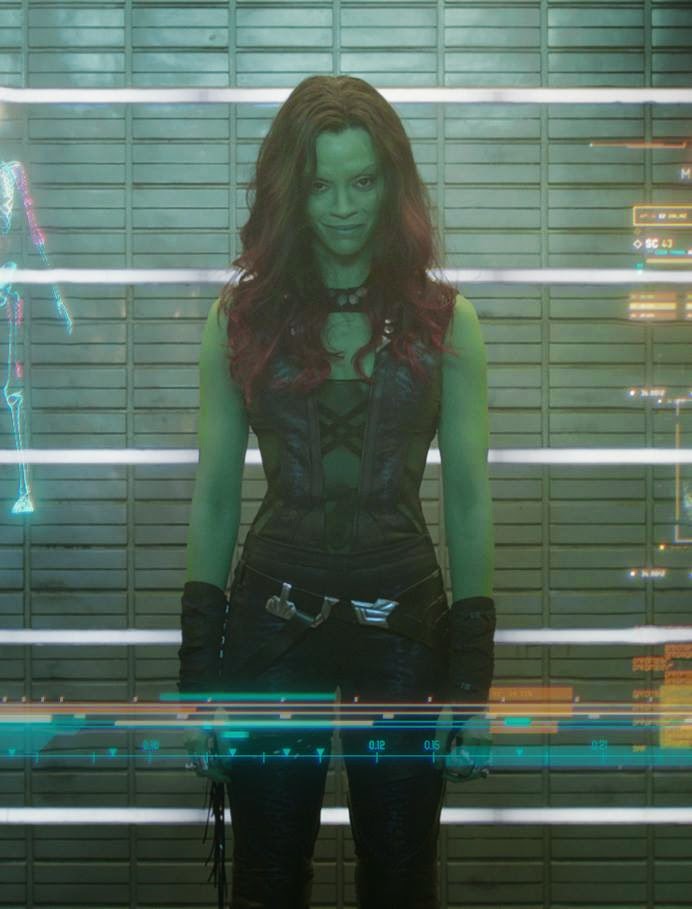 3) Gamora (Guardians of the Galaxy): I would totally have sex with Gamora. Patrick would find out and say, “Dude, I can’t believe you did that to me?” And I’d go, “Last time I checked, you were married, dude.” And he’d say, “Um, so are you, shithead.” And I’d stammer, “But…but…” And disguising his voice Patrick would say, “But you’re part of the team, right?” And I’d respond, “Did you just quote The Sandlot?” And Patrick would exclaim, “I totes did!” And I would say, “I thought you didn’t like that movie.” To which Patrick would reply, “Well, I didn’t, but I have to admit that over time its charm has really rubbed off on me.” And then I’d say, “Wow, that’s great and really open-minded of you.” And Patrick would respond, proudly, “It is”. I’d ask, “Have you also come around on The Goonies?” To which Patrick would say flatly, “No.”
Posted by Patrick Bromley at 6:00 AM