The regular gang -- plus a new contributor! -- tell you what to watch this weekend. 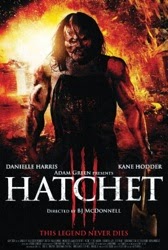 Adam Riske: Hatchet III (2013, dir. B.J. McDonnell) This weekend is Chicago's big horror convention of the year -- Flashback Weekend. Sadly, they are not doing screenings of horror movies in conjunction with the con this year, which is a bummer because it's where I got to see an early showing of the great You're Next last year. Another movie I caught during last year's festivities was Hatchet III, and as a fan of the original (but not of part II), the third in the series definitely worked for me. It's fun, amusing and fast paced and the perfect movie to watch if you're jonesing (like me) for Scary Movie Month. Another discovery of last year's Flashback Weekend for me was a candy called Kazoozles. Has anyone ever had these? They're delicious. I remember P Bromley made fun of me for buying a candy called a Kazoozle but honestly he doesn't know what he's missing. 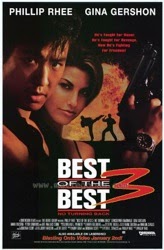 Adam Thas: Best of the Best 3: No Turning Back (1993, dir. Phillip Rhee) I assure you that you do not need to see the previous two Best of the Best movies to understand what is going on in Best of the Best 3. More importantly, they aren’t on Netflix. Phillip Rhee plays Tommy Lee (oh, that’s fun to say), a martial arts instructor who visits his family in the middle of nowhere. Well guess what? R. Lee Ermy (for some reason uncredited) is the leader of a White Supremacist group. Uh-OH! I’m always a fan of a movie that has something that I’ve never seen before, especially an action movie. There is a fight scene that takes place at a carnival that is pretty great in its ridiculousness. Otherwise, Rhee actually knows how to fight, so the action sequences are pretty good. Gina Gershon looks amazingly '90s and you get to see Shooter McGavin with a shotgun. 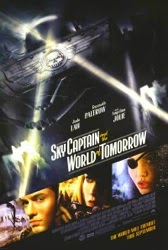 Heath Holland: Sky Captain and the World of Tomorrow (2004, dir. Kerry Conran) A lot of people will tell you that Sky Captain and the World of Tomorrow isn't a very good movie. Those people would be correct. HOWEVER-- I feel like the movie aims pretty high and takes a lot of chances, which I admire. Sky Captain attempts to mine the same territory as post-World-War-II comic books and comes off a bit like a cross between The Rocketeer and The Iron Giant: think gigantic robots, zeppelins, prop planes, shadowy military groups, and good, old fashioned pulp entertainment. It's like a Fleischer cartoon come to life, which I applaud any film for attempting. The unfortunate downside of this is that the film shot extensively and almost exclusively against green screen backgrounds, thus robbing the movie of any soul and tangibility. I get why this decision was made, but there are unfortunate ramifications of this decision, particularly a coldness and lack of tangibility. Performances are as good as can be expected when the actors (consisting of Jude Law, Gwyneth Paltrow, and Angelina Jolie) are all reacting against nothing. Still, I think there's a lot to like about this experiment, particularly that it tries to have FUN. Dial up your Grandpa on the Ouija and enjoy some old-timey adventure. 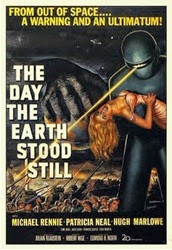 JB: The Day The Earth Stood Still (1951, dir. Robert Wise) This film is so prescient, so wise, and so entertaining, it's a wonder that it hasn't been remade. Wait -- it has? In 2008 with Keanu Reeves? Uh, better stick with this version. How much do I love the original? As I type this, I am staring at a tiny Gort statue on my desk-- Klaatu Barada Nikto! 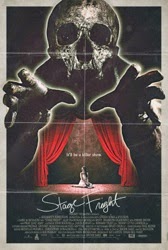 Patrick: Stage Fright (2014, dir. Jerome Sable) Stage Fright is on Netflix! A musical horror movie from earlier this year, Stage Fright combines brutal gore, comedy, giallo mystery and a love of musical theater to tell the story of a killer stalking the campers at a summer camp for drama kids. You can read my review of the movie for more of my thoughts, but I'll sum it up by saying I'm a big fan. Not everyone likes it as much as me, but with a running time of only 88 minutes and the very lovely Allie McDonald in the lead, you really can't go wrong. Just look at that poster! Incredible. Jerome Sable knows what he's doing, and the movie is so much fun. Make sure you stick with it through the end credits.
Posted by Patrick Bromley at 12:00 PM