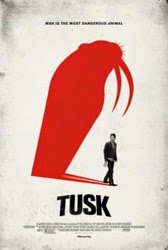 I don't even know how to start talking about this one.

Kevin Smith's latest film, Tusk, is unlike any movie he has made. It's actually unlike most movies I've seen, for better and for worse. It is a movie that wants to be a horror film except when it wants to be a broad, silly comedy. Sometimes those two tones co-exist, creating something uneasy and unique. Often, though, they slam up against one another. If the comedy doesn't completely cancel the horror out, it certainly dulls the impact.

Or maybe it doesn't. Maybe this is exactly the kind of movie Smith wanted to make. He took a crazy premise -- a mad scientist type wants to turn another human being into a walrus -- and made a movie out of it. That fact alone should be applauded. That the movie is sometimes quite good is astounding. Even when it isn't (when it gives way to Smith's lesser tendencies or when the jarring tonal shifts muck things up), it's never less than utterly, watchably fascinating. This is a movie I could talk about for days. 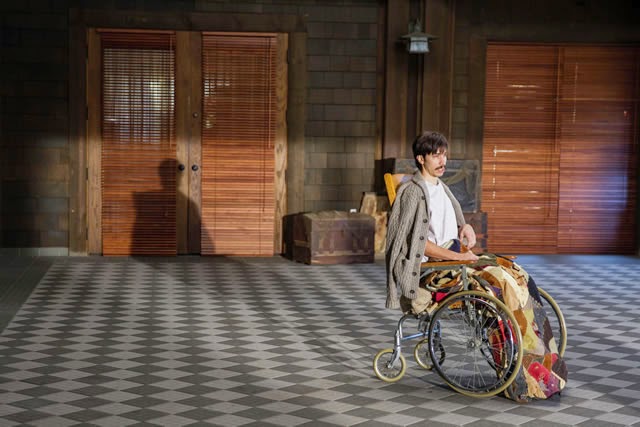 Justin Long plays Wallace, an L.A. hipster (by way of New Jersey) who hosts a podcast, "The Not See Party," where he travels the country and collects stories of unusual people, which he brings back to the show to describe to his friend/co-host, Teddy (Haley Joel Osment, all growns up). He travels north to Canada to meet with the "Kill Bill kid," who cut off his own leg while practicing with a samurai sword in his garage and had the amputation uploaded to YouTube. When that doesn't work out, Wallace calls an audible by finding a curious ad in a bar restroom: a stranger describes a life of adventure at sea and is now looking for companionship. That man is Howard Howe (Michael Parks), a rich, eccentric recluse with a flare for storytelling and a very peculiar interest: his greatest friendship, he explains, was with a walrus. Now he wants to turn Wallace into a walrus. While Teddy and Wallace's girlfriend Ally (Genesis Rodriguez) enlist the help of a former detective (an actor whose identity has been spoiled everywhere but which I will not spoil; he's billed as his character name, "Guy Lapointe") to track Wallace down, Howard Howe begins making...changes.

What initially began as a conversation between Smith and producer Scott Mosier on their SModcast podcast (this has to be the first movie that has a "based on the podcast" screen credit) eventually morphed into this strange, messy, singular film. Clips from that podcast play out over the closing credits of the movie, and it's fascinating to hear just how closely the finished film adheres to what Smith laid out in that impromptu discussion. Is that part of the joke? That he shot the first thing he came up with? Or were the ideas really so weird and strong that they deserved to be written and filmed as-is?

One could accuse the movie of being a totally self-indulgent in-joke. That's accurate. I also think Smith would cop to it -- it's practically the fuel driving him to make the film. Therein lies part of its charm. It's a movie that feels like it was made on a dare, one in which Smith answers to no one. He brought a film to life (in wide release, no less) based on a joke he made on his own podcast. His longtime best friend and former co-star is a producer. His wife is a producer. She has a bit part, as does his daughter. This is Kevin Smith doing whatever the fuck he wants, and even if the movie is not for you (and it's not going to be for a lot of people), we movie fans ought to be excited about anyone getting that kind of artistic freedom. If he fails, let him fail on his own terms. At least it's something that feels like nothing else that's out there right now, and like nothing else Smith has made before. 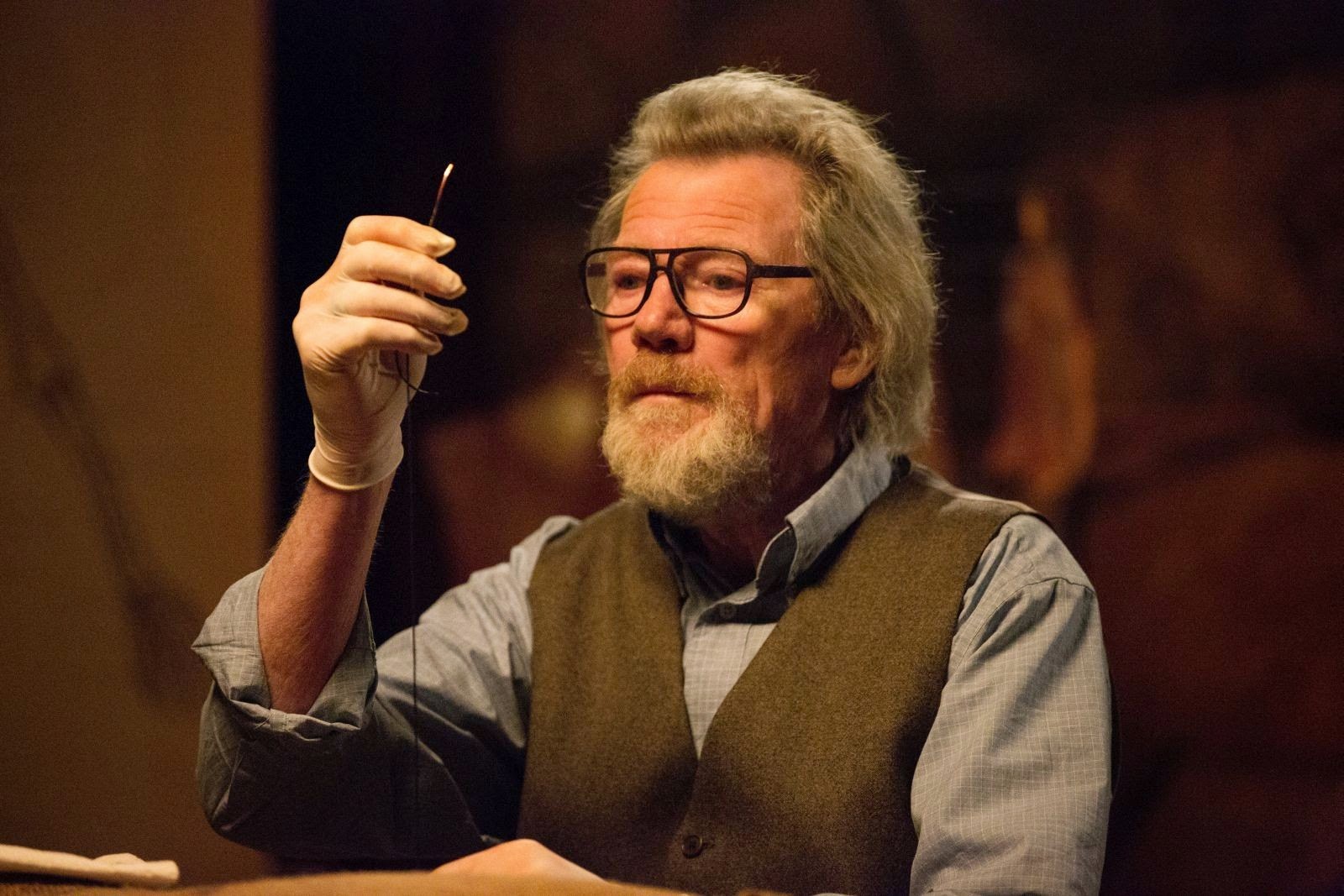 Well, almost. I don't know if it's because he didn't trust the horror aspects of the story or if he really just can't resist inserting a bunch of comedy into the proceedings, but any momentum Tusk is able to build is constantly getting interrupted by jokes. At first, it's ok. We meet Wallace in his natural environment, hanging out with his friends, bantering with his girlfriend, and everything feels like a Kevin Smith movie. Gradually, though, it starts to get creepier and weirder, but Smith still can't stop himself from making a bunch of jokes about the way Canadians talk or the things (he claims) they hold dear. It didn't bother me that I didn't laugh. Comedy is subjective. What bothers me is that the comedy feels cheap and obvious. Lazy even.

And then Michael Parks shows up and Tusk starts to really feel like it could be something. Parks is the kind of actor who makes every movie better just by being a part of it. He was previously the best thing about Smith's Red State, and his performance in Tusk is every bit as good (actually better, as he's afforded the chance to act more than just one note). Smith gives him dialogue that's eccentrically verbose -- all purple prose and oddball digressions -- but it's downright hypnotic. His initial scenes with Long, who is fine playing an insufferably obnoxious prick (and certainly commits once things go where they're going), are the best in the movie.

Eventually, the film takes a turn and goes further than I expected it to go (at least at that point in the story). It's very, very dark and genuinely disturbing. Finally, with all the goofing and joking out the way, Smith has doubled down and made a real live horror movie. 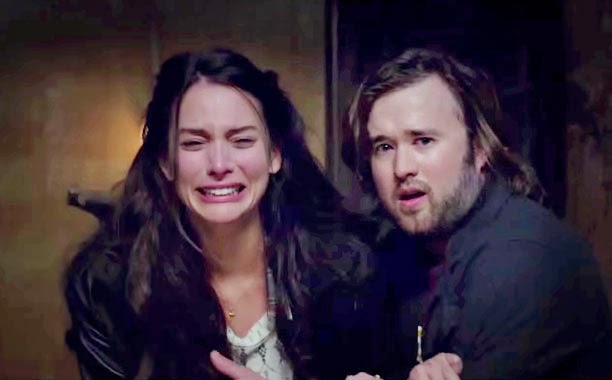 Just one scene later, though, a new character is introduced who doesn't just shift the movie back to comedy -- he downright derails it into cartoonish farce. It's then that Smith's intentions become clear: it's all supposed to be funny. Yes, there are images that are grotesque and disturbing, but they're all in the service of a big goof. I won't say that comedy and horror can't exists simultaneously; after all, The Texas Chainsaw Massacre 2 is one of my favorite horror movies. The difference there is that the laughs come from the horror -- they're queasy, macabre punchlines inside of a broad, twisted movie. The comedy in Tusk exists outside the horror...or should I say the horror exists outside the comedy? It becomes apparent that the few genuinely unsettling moments in the movie got there almost by accident -- by Smith amusing himself and going as far as he possibly could not to upset us, but to prove to us that he could. It's all but confirmed hearing the podcast clip during the end credits in which Smith laughs as he ad-libs the plot that he would eventually put in the actual movie. He wants it all to be funny. The entire movie is one big "can you believe we're doing this?" gag.

Those jarring shifts happen again and again. A scene will start to go somewhere and then get cut off by a flashback or a change in perspective, switching to the outside world for subplots or extra exposition. Would the movie have been better if Smith had just stayed in the room with Parks and Long? Perhaps. He initially seemed to think so, as one of the tenets he originally laid out on the podcast (Episode 259: "The Walrus and the Carpenter") was that the movie never leave the two of them. It at least would have rid the film of its Guy Lapointe problem -- which, if I'm being fair, will be some people's favorite thing about the movie and an absolute dealbreaker for others. This is that kind of movie: one that inspires strong reactions. It's been a long time since Smith made a film in which both critics and audiences alike could have a passionate response to the text and not just to him.

One of the charms of Smith's early work is how personal it felt -- he was pulling from his own life, his own experiences, his own heartache and mining it for both comedy and truth. There are personal touches in Tusk, too, but they're fairly obvious: Wallace is a successful podcaster with a devoted audience who hangs on his every word, same as Smith. The truly interesting autobiographical detail that sneaks into the film is pretty much a throwaway, as Wallace argues with his girlfriend about how he's changed and hardened. Old Wallace, he argues, was a sentimental pussy who trafficked in Star Wars puns (it's hard not to hear that and assume Smith is referencing himself in his Clerks days). New Wallace is a mercenary asshole -- a guy who gives himself license to behave however he wants because, he argues, it's what his fans want. It's all too easy to hear a bit of Smith speaking directly to his critics. Don't like this "new" Kevin Smith? Too bad. I'm not for you. I'm for the fans. I suppose Tusk is the result. 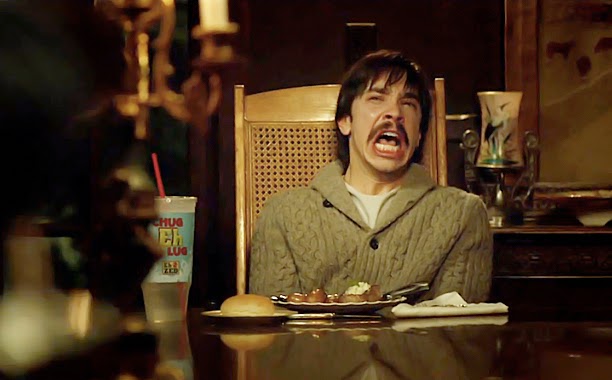 I want to believe there's a message somewhere in here. The best I can come up with is that it's a morality tale targeted at hipsters. With his ironic mustache and his podcast devoted entirely to mocking people from a position of superiority, Wallace is the true American douchebag. His plight could be seen as the logical result of poking the hornets' nest one too many times; it's all well and good for him to make fun of people he sees as weird or lame or worthy of mockery, but some people aren't going to put up with that. Some people aren't just goofballs. Some people mean that shit. Howard Howe means it. Let that be a lesson to all of you, hipsters.

There's so much to say about the screenplay of Tusk and Smith's intentions in bringing it to the screen that I haven't even touched upon the fact that it's his best film from a purely technical perspective. James Laxton's photography is, in its best moments, handsome and foreboding in the way he bathes Howe's mansion in shadow. Christopher Drake's score is effective. To say that it's the most one of Smith's movies has ever looked and felt like a real movie sounds condescending, but Smith is the first guy to admit that mise-en-scène has never been his strongest suit. His writing has always been the star. Tusk finds him stretching even further as a filmmaker than Red State, which was over-directed to the point of being bogged down in self-conscious style. This one is more ambitious, more accomplished. It might just be Smith's first movie that's better directed than it is written.

Did I like Tusk? Not exactly, but I still don't even know if I could say that for sure. There are things to like about it and even its badness is interesting. I'd much rather Smith continue to work quickly on personal, oddball movies like this than doing for-hire directing gigs like Cop Out (a movie I don't even hate). It's a complete tonal mess and its comedy is rarely funny. It shifts gears just when it's getting good and never really recovers, save for a closing scene that's simultaneously absurd and haunting -- the one moment in the movie in which the mixture of comedy and horror works organically. Perhaps it comes too late. Still, there's something about the film that I can't quite shake, and that's not to be too easily dismissed. Tusk is either disastrously awful or secretly good. The truth is probably somewhere in between. It's not one or the other. It's both.

#walrusdunno
Posted by Patrick Bromley at 12:02 AM