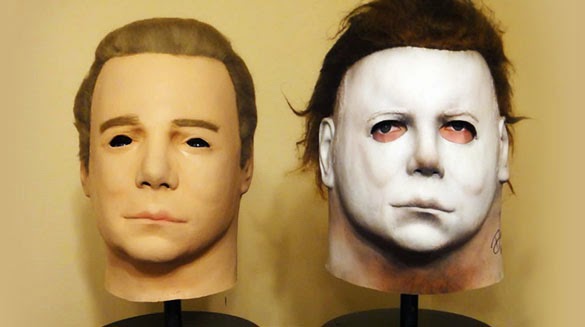 Scary movies are the best. They're not only terrifying to watch, they're also fun to talk about (and review in exactly seven words). This is only a random sampling of some random horror trivia. Feel free to share yours in the comments below! 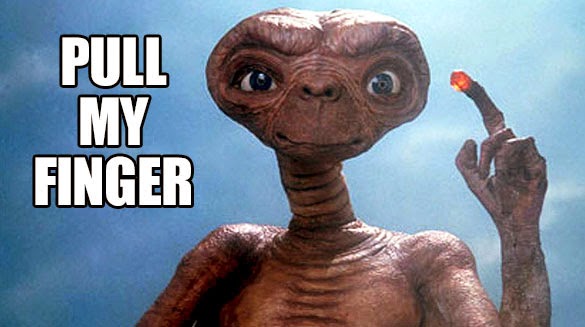 Only five years after Steven Spielberg directed Close Encounters of the Third Kind (1977), a darker sequel, tentatively titled Night Skies, was pitched that featured aliens who could kill with their fingertips. Surely, only soldiers with guns walkie-talkies could prevent this phalangeal threat, no? The link above contains some cool concept art from special effects artist Rick Baker. This idea kind of gives me a Gremlins vibe. 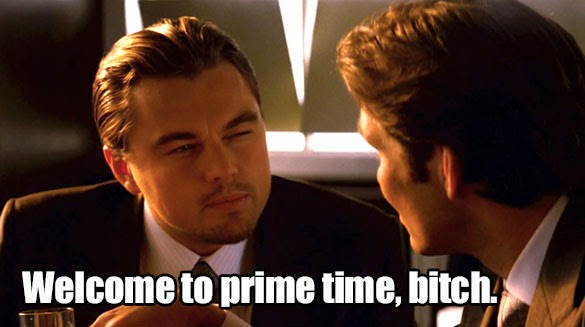 Writer/director Christopher Nolan originally wrote an 80-page treatment for a scary movie about "dream stealers" -- inspired by lucid dreaming -- and presented the story to Warner Bros. I'm assuming it would've been different from A Nightmare on Elm Street 3: Dream Warriors (1987) (more BWWAAAHMs, perhaps?). Inception later evolved into a heist movie because, according to Nolan, the horror genre didn't provide enough emotional stakes. Tell that to Heather Langenkamp.

3. The Rocky Horror Picture Show (1975) is the longest-running release in film history

This piece of trivia is courtesy of nutjobs (sorry, "fans") who religiously attend midnight screenings at hole-in-the-wall theaters. I mean, sure, if your idea of fun is to dress up in costume, yell back lines during extended pauses between dialogue and throw props at various times during the film, then great! I'm fine with just staring at Susan Sarandon.

4. Also, the skeleton clock from The Rocky Horror Picture Show (1975) had a real skeleton in it 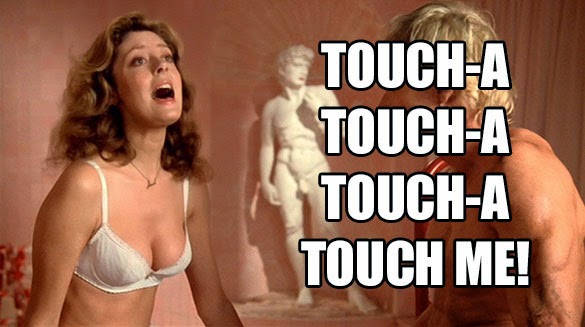 You know what else has a real skeleton in it? Susan Sarandon. 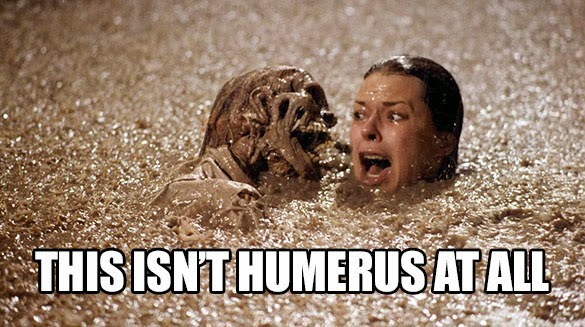 The scene in Poltergeist in which mom Diane Freeling (JoBeth Williams, aka, stone-cold MILF) runs outside during a storm (wearing nothing but an oversized T-shirt) and slips and falls into the family's future swimming hole/present mud pit is horrible for a number of reasons: 1.) night swimming is scary, 2.) the downpour has made the mud slippery, therefore it's impossible to escape, and 3.) SKELETONS! "You son of a bitch! You moved the cemetery, but you left the bodies, didn't you? You son of a bitch, you left the bodies and you only moved the headstones! You only moved the headstones! Lies! Lies!" Yes, the skeletons in the pool are real because they were CHEAPER than buying props.

Seven-year-old Danny Lloyd, who played Jack Nicholson's fictional son Danny Torrance, thought he was filming a drama. He didn't realize it was a horror film until he was 13, and he didn't see the movie in its entirety until he was 17. If he only waited seven more years, he could've just seen the three-part ABC TV miniseries. Sadly, Courtland Mead's (1997's Danny Torrance) entire life has been a horror movie.

7. Robin Williams was considered for the lead role in The Shining (1980) 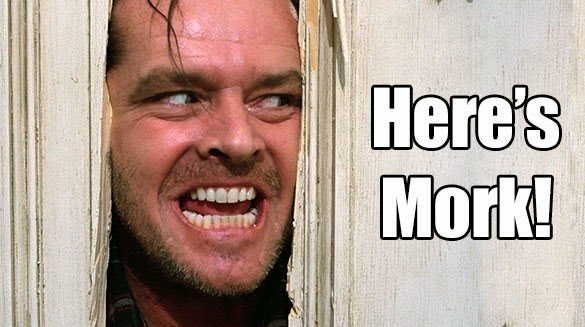 I'm usually bored by trivia regarding casting (e.g., "So-and-so auditioned for the part!"). It's like, sowhat/whocares? But in this example, the "why" is pretty interesting. Based on Williams' manic performance on the TV show Mork & Mindy (1978), director Stanley Kubrick deemed him too psychotic for the role of the "psycho" father and husband in The Shining. Yup. I really do love Jack Nicholson's portrayal of Jack Torrance, but I'd be lying if I said I wasn't a little curious to see how Robin Williams would've channeled his frenzied youthful energy into something that dark. 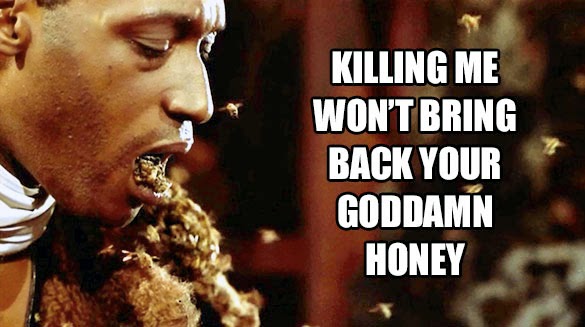 What's that, you say? The bees were only 12 hours old so that their stingers weren't powerful enough to cause real damage? NOPE. Oh, a mouth guard prevented the bees from crawling down Tony Todd's throat? NOPE. And an ambulance was on set in case Virginia Madsen had an allergic reaction? NOPENOPENOPE.

9. In the Friday the 13th film franchise, Jason was originally named Josh 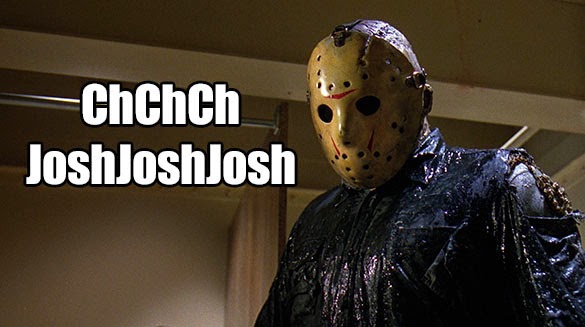 I have a good friend named Josh. I hope this doesn't come across wrong, but dude's like the least threatening person I know. Josh Voorhees? That's tantamount to Barney Voorhees. My friend Jason, on the other hand?  He'd soon's kill you as look at you. Granted, in the first Friday the 13th (1980),  Josh/Jason isn't yet the hockey-masked killer. He's just a poor kid who doesn't know how to swim. BUT STILL.

10. The original ending for Freddy vs. Jason (2003) had them meeting Pinhead in hell 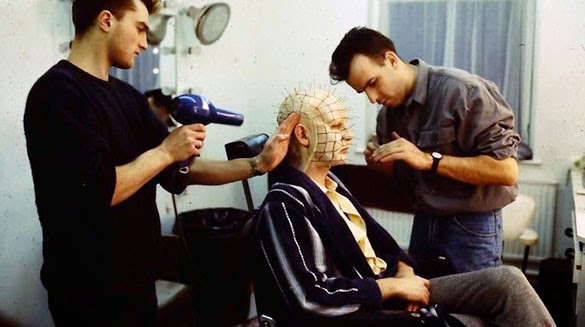 Sure, there were lots of different proposed endings. And yes, writers often have fantastical ideas that are either unfeasible or simply unfilmable. But that would've been a kick-ass conclusion.

11. The animatronic spider in Arachnophobia (1990) was created by Jamie Hyneman

Jamie Hyneman is better known today as the grumpy beret'd host of the Discovery Channel's popular TV show, MythBusters. But before that, one of his earliest special effects gigs was on the set of Arachnophobia, wielding magnets for many of the spider effects. In Popular Science magazine, he revealed that he also helped construct the giant animatronic queen spider used during the climactic battle sequences. In other words, you have this weirdo and his giant walrus mustache to thank for your one of your biggest irrational fears.