Sometimes you know it before a movie even starts. Other times you start to suspect it after a few minutes. Still there are other times when you’re having a blast when the movie you’re watching pulls the floor out from under you, leaving you wondering what happened and if the person next to you will judge you for sobbing uncontrollably. Those tears can mean only one thing: you’ve just watched a big bummer. In the words of the Terminator, “now I know why you cry.”

Here’s a few of my own big bummers. Some of them I enjoy; others not so much. The one superpower they all have in common is the uncanny ability to kill all joy. Mild spoilers for movies that are years old may follow.

Kind of like the reverse Magic Mike, this was a movie that seemingly every woman HAD to see about ten years ago. The film sucked audiences in with the promise of steamy romance via Ryan Gosling and Rachel McAdams practically dry-humping in the rain. But then it pulls a bait and switch with septuagenarians James Garner and Gena Rowlands dealing with the reality of mental illness and slowly losing a spouse. Yes, it’s sweet, and the story presented in The Notebook is one that millions of people all over the world have dealt with. So why does this movie leave me with such a bad taste in my mouth and make me feel used and manipulated?

Okay, so a lot of Darren Aronofsky’s movies are bummers. I actually think The Wrestler is a fantastic film and legitimized professional wrestling for a lot of people, but on a recent viewing I found the movie to be really judgy in a way that I’ve never noticed before. Wrestling is a tough profession and a lot of the boys have either fallen through the cracks over the years or been the victim of their own success, but the case depicted in Aronofsky’s film seems extreme, to say the least. Most guys who achieved notoriety in the rasslin’ world during the ‘80s have gone on to be mentors or legends (and many now have their own podcast); it’s a hard life, but not a dead-end one. Even Jake the Snake Roberts, who is one of the major inspirations for Mickey Rourke’s Randy the Ram, has managed to shed many of his demons and find redemption with his family, friends, AND the business, of which he is still a part. I suppose the way I ultimately feel about this film is that in an effort to show the hardships that a life in wrestling contains, Aronofsky (along with screenwriter Robert D. Siegel) appears to have gone too far in the other direction and made a maudlin, three-hankie affair--and thus, a big bummer.

Marley and Me is one of those Hollywood films that seems to sell itself: you’ve got a newlywed couple (Owen Wilson and Jennifer Aniston) discovering how challenging life can be when they bring a new puppy into it. Marley is your typical adorable dog, and the film trades on his rascally shenanigans as he and his owners slowly become a family over the years. This film opened on Christmas Day in 2008 and everyone flocked to see it for some yuletide warmth. What no one was expecting was the film to sucker punch them in the stomach by *SPOILERS* having the dog put down in the third act. Now your kids are crying, your wife has makeup running down her face, and you’re thinking about death. Merry Christmas!

Sidebar: A few years ago, I had to have my own dog put to sleep after complications from lymphoma. It was a horrible experience and it totally devastated me. It all happened so quickly and I didn’t really have time to properly say goodbye. On the way home from the veterinarian, I stopped at a big box store because I couldn’t bear the idea of going home and looking at his bed and his food dish. I figured I’d walk around the DVD aisles for a while and try to think about anything except what had just happened. Guess what movie was playing on every single TV screen in the store? Marley and Me. I REALLY don’t like this movie. 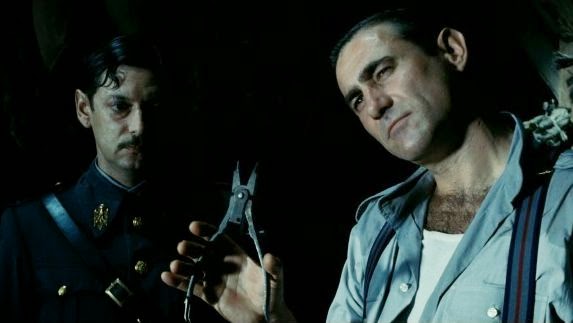 The trailers made this look like it was going to be a magical trip to del Toro Land, complete with swirly patterns and monsters that would make Jim Henson’s Creature Shop proud. One could even be led into believing that it was going to be a trip into a darker version of Narnia, full of faeries and centaurs and magical hiding places in the woods. In actuality, Pan’s Labyrinth takes place during the aftermath of the Spanish Civil War in the 1940s, as the fascist military crushed those who had been loyal to democracy. It depicts real-life horrors, such as systematic execution and innocent people being bludgeoned to death. Seriously, the ratio of actual wartime horror vs. whimsy is about 90% awful atrocity and 10% wonder. It’s one of the most dismal and heartbreaking films I can recall sitting through; I felt tricked and lied to. Honorable big bummer mention goes to 2008’s The Boy in the Striped Pajamas, which is a similar story of a child in a concentration camp during World War II. If you have children, hug them. And don’t ever let them watch Pan’s Labyrinth.

I thought Disney Pixar’s Up was going to be a bright and colorful adventure about an old dude in a house carried by colorful balloons. Well, it is…after you get through the crushing montage of a man losing everything that he loves and growing old all alone. WTF?! In order to tell a compelling human story, must we bring the viewer to their absolute lowest point? I mean, anything would have been “up”-lifting after all that mourning. I like this movie, but I think it’s a cheap tactic employed very obviously and deliberately to achieve the desired results. All movies manipulate their viewers, but I don’t like it when it feels as clumsy and blatant as it does here.

On paper, I was the target audience for this movie when it was released in 2004. Mel Gibson’s depiction of the final days of Jesus, The Passion of the Christ is a marked departure from other religious films such as King of Kings and The Greatest Story Ever Told. Instead of focusing on the life and miracles of Jesus, it focuses on the torture and death (and yes, for about ten seconds, resurrection) in detail never depicted in the New Testament. It’s a horror movie, full of graphic violence and unrelenting brutality, and THIS is what Gibson believes we should be focusing on, instead of all those lessons about forgiveness, humility, and kindness. For the record, I suppose those three things are present in The Passion of the Christ, but it’s hard to see them when they’re buried in so much blood and gore that you can barely look at the screen. Watching this in the theater was exhausting. Everyone was bawling, people were getting up and leaving because they were sick to their stomach, anxiety attacks were happening all over the nation. I once knew a guy who had watched this movie so many times that he would fall asleep with it on at night. Now THAT’S disturbing. For my money, I now think Monty Python’s Life of Brian understands what the gospels are saying better than any biblical movie before it or since. Blessed are the cheesemakers, indeed.

Not that long ago, cable television was advertising Forrest Gump as “funnier than you remember.” This is like advertising Schindler’s List as a white-knuckle thriller that you’ll want to see again and again. Does Forrest Gump have funny parts? Absolutely. Then again, it’s also monumentally sad, as pretty much everyone in Forrest’s life is plagued by death or disaster. Come to think of it, I’ve never seen Forrest Gump and the grim reaper in the same place at the same time. Hmmm…..

Another Christmas day release, Patch Adams was supposed to be a feel-good movie with Robin Williams returning to comedic form after Good Will Hunting and What Dreams May Come. It did feel good to see Patch Adams as a doctor who set his patients at ease using laughter as his strongest medicine. What didn’t feel good was the subject matter of mental illness, suicide, molestation, and homicide. I recognize that the film is based on the memoirs of the actual Patch Adams, but the movie was marketed as family entertainment. It was Christmas! Ho ho ho, candy canes, reindeer, MURDER. While it was never going to be a masterpiece, truth in advertising and a different release date would have done wonders for this movie.

Those are just a few of my big bummers. Look, I know that not every movie can be sunshine and bubbles and that many of these sad tales of woe (though not all of them) have their place and tell a story that needs to be told. In fact, I’m a big advocate for the downbeat ending, which I don’t think we see enough of in western culture. Still, sometimes a movie can really catch you off guard and break your spirit. When that happens, you remember it for what it was. It’s hard to forget a big bummer.
Posted by Patrick Bromley at 5:00 AM

Email ThisBlogThis!Share to TwitterShare to FacebookShare to Pinterest
Labels: forrest gump, heath holland on, pan's labyrinth, patch adams, sad movies, the notebook, the passion of the christ, the wrestler, up