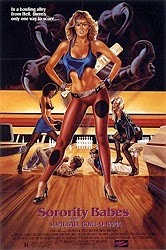 This movie does not live up to its title.

I grew up as a kid obsessed with cult and B-movies. I might be the only 6th grader to ever convince his junior high Newspaper Club sponsor to give him a section of the school paper over to writing about Troma movies and Hell Comes to Frogtown and all the kind of stuff I would stay up every weekend to watch on USA Up All Night. I remember writing about a little movie called Sorority Babes in the Slimeball Bowl-o-Rama more than once in the school paper without having seen it. Such was the power of that title. I was drawn to its sheer audaciousness.

Like a lot of exploitation movies, the title is a cheat. It sells a wildly fun movie that is not delivered. Released in 1988 through the "Urban Classics" label (a subsidiary of Empire Pictures, Charles Band's company before Full Moon, making this column something of a cheat [but I watched the movie on Full Moon Streaming, which was the original mission statement of this column, so fuck you it counts]), Sorority Babes in the Slimeball Bowl-o-Rama finds Michelle Bauer and Brinke Stevens as the titular babes pledging the titular sorority. After several hazing rituals including a kinky spanking sequence, they are ordered to steal a trophy from the local bowling alley. Accompanied by three horndogs/sex offenders who have been spying on them in the shower (as well as during the aforementioned spanking), the girls locate the trophy and release a mischievous imp in the process. After granting a few wishes -- leading to a lot more nudity -- the imp transforms two of the sorority sisters into demons and they start killing everyone. The end.

It's no secret that Charles Band is a terrific showman, following in the traditions of everyone from P.T. Barnum to William Castle to his clearest antecedent Roger Corman. It's how he's built a 40-year career as a maker of B-movies and exploitation fare -- he sells concepts, great-sounding titles, fantastic posters or cover box art. But as is the case with a lot of showmen producers, the resulting films often fail to live up to the movies we imagine in our minds when we hear about them. Sorority Babes in the Slimeball Bowl-o-Rama is such a movie. It's impossible not to want to watch a movie that sounds so outrageous, just as it's impossible not to feel disappointed once you do.

In some ways, I found the disappointment of Sorority Babes to be something of a relief. I have a tendency to romanticize the Empire films of the '80s and the Full Moon films of the '90s, back when the VHS market was booming and Band had slightly higher budgets to make low-budget movies. The more recent Full Moon movies I've seen -- stuff like Gingerdead Man and Unlucky Charms -- have bummed me out because they feel cheap and boring and unambitious, often too talky and confined to a single setting. But Sorority Babes reminded me that Band has always made these kinds of movies; it stands to reason that when you crank out as many titles as he does (particularly Empire's output in the '80s), they won't all be home runs. The budgets have always been low; the shooting schedules always short. The really good movies are the exception, not the rule. It's no different than any other studio.
Sorority Babes is frustrating in many of the same ways as later ultra-low budget Full Moon efforts: slow pacing, a small cast confined to a single location, a monster that doesn't work (the imp is a problematic special effect, as it's clearly a cheap rubber puppet but lacks the handmade aesthetic that would have at least made it charming) and has no clear personality, a tone that can't decide between campy horror and campy comedy and ends up having no real tone at all and a general lack of anything actually happening. Aside from the plentiful nudity, there's nothing to distinguish the movie. The kills happen primarily off screen, the characters (particularly the three male leads) are drawn too broadly and the murderous imp is forgettable. If not for that title, I suspect this movie -- which, it should be mentioned, was originally just called The Imp -- would be completely lost to time. Charles Band knew it. Credit where credit is due.

The film is directed by David DeCoteau, who started out as a production assistant for Roger Corman before he began making movies for Charles Band at age 24, beginning with 1986's Dreamaniac. He has gone on to direct nearly 100 movies since then, often under pseudonyms and many of them for both Empire and Full Moon, including Shrieker, Witchouse, Dr. Alien, Voodoo Academy and four movies in the Puppet Master series. His greatest talents are primarily that he works fast and cheap, which makes him perfect for Charles Band's stable of filmmakers. His style is unidentifiable, lacking the artistry of other Full Moon regulars like David Schmoeller and Ted Nicolau. Again, this probably makes him even more desirable as a director-for-hire, as he can jump onto any project in any genre (he's even the guy responsible for A Talking Cat?! a few years ago) without imposing any style that would call attention to itself. While much of his later genre work is characterized by an abundance of handsome, shirtless men, there's nothing like that on display in Sorority Babes. He was just starting out and hadn't yet found his niche. I guess that's why it's the women that are shirtless here. 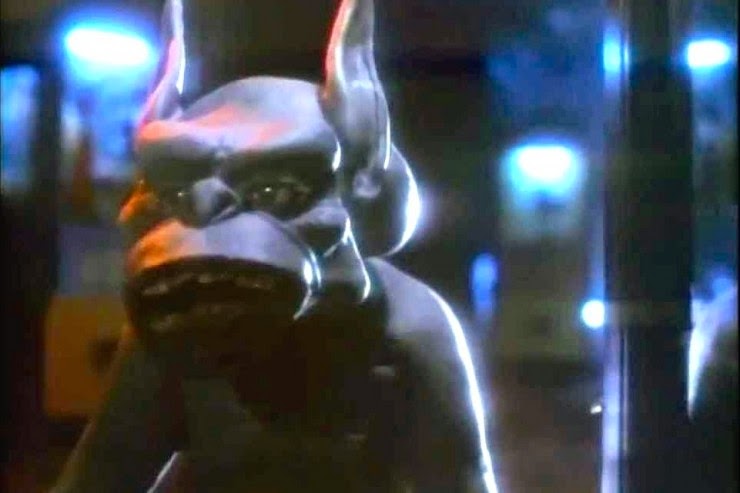 Of course, the main draw of Sorority Babes in the Slimeball Bowl-o-Rama is that it is one of only two movies to unite three classic Scream Queens in Michelle Bauer, Brinke Stevens and Linnea Quigley (they also starred in DeCouteau's Nightmare Sisters the same year). All three were regular fixtures in these kinds of movies throughout the '80s, though I'm not entirely sure why beyond their willingness to take off their clothes (for those keeping score, Quigley keeps it all on in Sorority Babes). That's not to say that they are not talented actresses nor charismatic on screen, as I have seen all three be those things in varying degrees depending on the film. But it creates a kind of chicken/egg conundrum: did they become Scream Queens because they were particularly effective in these kinds of movies or simply because they appeared in enough of them to earn the title?

The three stars of Sorority Babes reunited last year for Trophy Heads, Full Moon's first original series that premiered on its streaming site in weekly installments (and will be combined into a feature for a DVD and Blu-ray release hopefully later this year). They play versions of themselves and comment a lot on their former status as "Scream Queens," and though the series starts out a little creaky, it's a great deal of fun by the end. It's a better showcase for their talent than Sorority Babes is, only because it allows them to act and play with their images instead of get naked (Quigley, in particular, has a funny arc, having discovered Jesus) and makes a case for why they became so beloved in the first place. 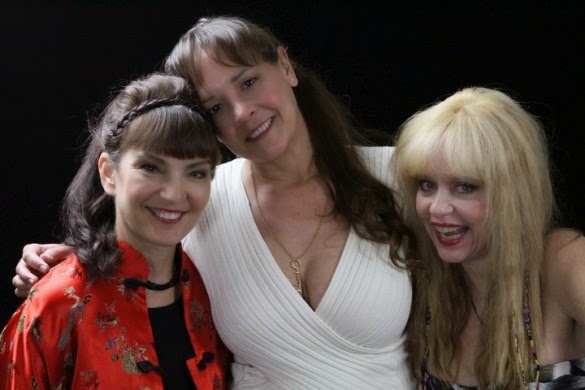 The over the top salacious wackiness of the title Sorority Babes in the Slimeball Bowl-o-Rama was either part of a trend for Band during the late '80s or else taught him a valuable lesson, as he would also release titles like Cannibal Women in the Avocado Jungle of Death and Slave Girls from Beyond Infinity (the former I haven't seen in over 20 years [despite the presence of stars Adrienne Barbeau, Shannon Tweed and BILL MAHER] and the latter of which I have never seen). Unlike some of the later Full Moon stuff, Sorority Babes isn't even selling a high concept -- at least Gingerdead Man and Evil Bong are wacky ideas. All the movie is selling is the sexiness of its Scream Queen cast and a flashy title. I guess it worked, as the film itself is forgettable but the title has stuck with me since I was 11 years old. For the purposes of Truth in Advertising, they should have stuck with calling it The Imp. Of course, had they done so I probably would never have seen the movie.

Oh, who am I kidding? Of course I would have.

Buy Sorority Babes in the Slimeball Bowl-o-Rama on DVD through the link below and support F This Movie!
Posted by Patrick Bromley at 12:00 PM