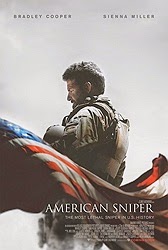 A true story about the deadliest sniper in military history and his tragic, untimely death sounds fascinating. Too bad American Sniper is not that story.

With American Sniper, Clint Eastwood's second movie of 2014 (the first was Jersey Boys), the director continues his slide into total indifference towards filmmaking. While he's often praised for his speed and efficiency during production -- he does one or two takes and moves on, and his style is that he has no style -- I'm starting to think that his methods are not a result of a lack of pretense but rather a disinterest in the movie making process. That's obviously not true -- at 84 years old, he wouldn't still be making movies if he didn't want to still be making movies -- but his technique is really starting to effect the quality of his output. And because of the story he has chosen to tell this time around, American Sniper deserves better.

A jacked-up Bradley Cooper plays Chris Kyle, the Navy SEAL from Texas known for being the most lethal sniper in U.S. military history. The film covers his life in fragments, beginning with him learning to hunt as a kid before jumping forward to his joining the military to meeting and raising a family with his wife (a wasted Sienna Miller) while serving four tours of duty in the Iraq War.

That's essentially the story, as screenwriter Jason Dean Hall (adapting Kyle's autobiography) doesn't focus on just a few events, instead giving you an overview of a whole bunch of stuff -- he wants to tell you how to build a clock. Well, that's not entirely fair; most of the movie is set during Kyle's years as a SEAL, though not until we get to see him as a kid learning how to hunt (which has to be in the movie just so we know where he learned how to shoot; otherwise, how could we possibly comprehend his skill? It's biopic midichlorians!) and get a random scene of his girlfriend cheating on him and them breaking up. Unlike the hunting bit, this has no bearing on the story at all, and seems like it's in the movie because someone forgot to edit it out. I guess it explains that he's single when he approaches his future wife Taya in a bar in the next scene, but that could have also been explained by having him be single when he approaches his future wife Taya in the next scene. 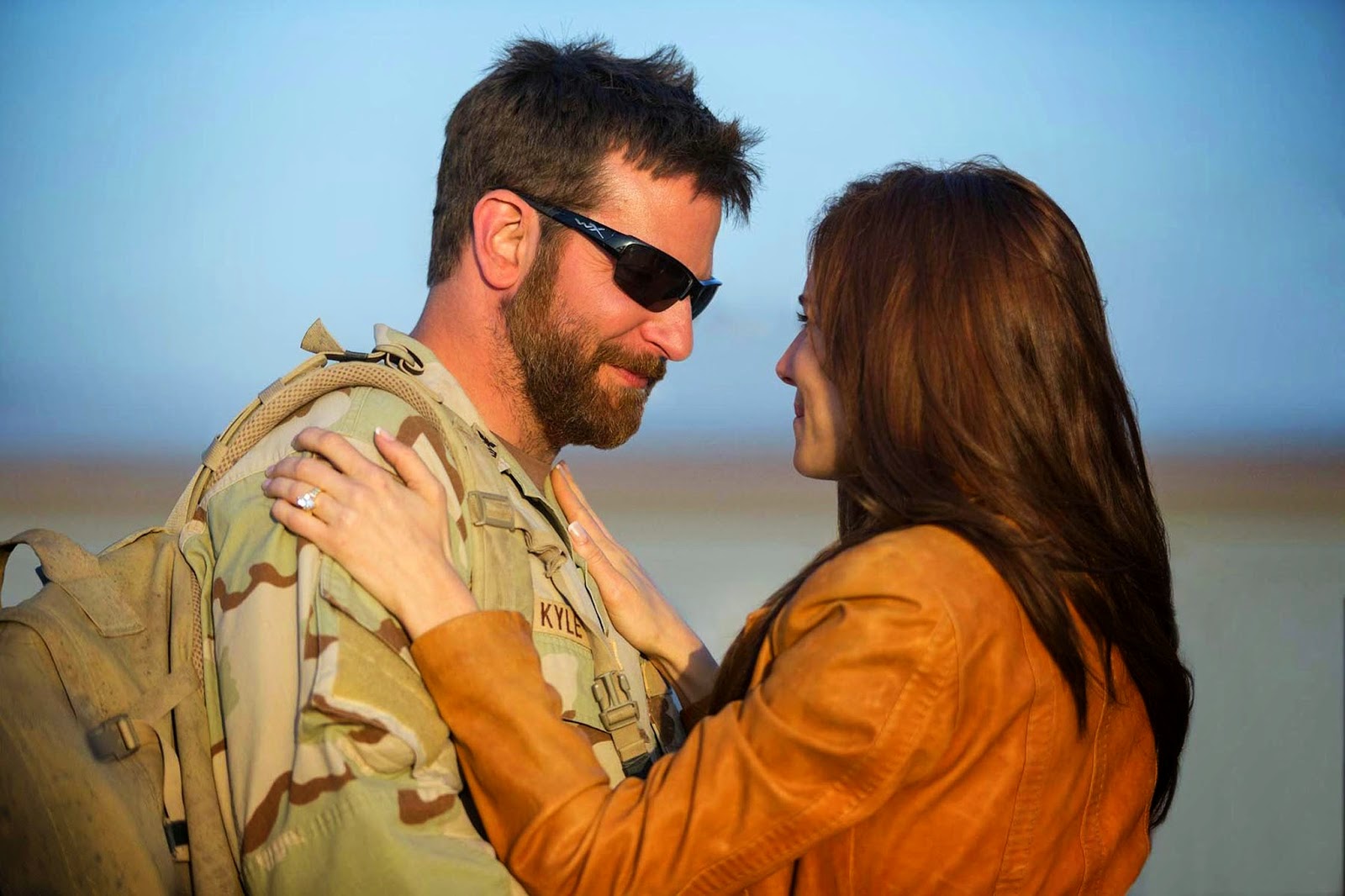 American Sniper employs what Film Crit Hulk is fond of calling (and JB is fond of repeating) "ant writing," which he explains as (emphasis his): IT IS AS IF YOU TOOK A MYOPIC, STEP BY STEP EVALUATION EVERYTHING DIRECTLY IN FRONT OF YOU IN A LINE AND THAT'S HOW TOLD THE STORY "Well first I stepped here. And then here. Then here. Then here."' It presents a succession of repetitive events: Chris Kyle engages in combat in Iraq, Chris Kyle returns home. His wife expresses concern. Sometimes he calls her from Iraq, where she again expresses concern. This is the extent of Sienna Miller's role. Sometimes we get to see him working as a sniper; often we do not. He comes home, he goes back, he comes home, etc. Very little changes except the number of kids he has, including one scene with a baby prop that's so fake and distracting it speaks volumes as to how little of a shit director Clint Eastwood gives at this point.

The problem with this storytelling is that very little of it actually tells us who Chris Kyle was as a person. We know that he was a hero and a good man. We know that he loved his family and was a brave and gifted soldier. These are all amazing, admirable qualities, and nothing I say should take that away from Kyle, but American Sniper doesn't figure out how to convey any of it outside of the most simplistic ways possible. I heard Bradley Cooper interviewed on The Howard Stern Show earlier this week where he said he and Clint Eastwood were very set on not portraying heroes and villains, nor the rights and wrongs of war (at this, Eastwood fails). Instead, they want only to make American Sniper a character study. I admire the intent -- and it's clear that almost everyone (particularly Cooper) went into this with the best of intentions -- but I have to ask them how they think this movie works as a character study. For as much as the title suggests it will be about the best sniper the military has ever known, there is no attempt to understand what that means -- what kind of person is drawn to that skill, how he's able to be better than anyone (he hunted as a kid?), what it means to do that kind of job. It presents a guy who is brave and decent and tells us he's the best but makes him seem like most of the other brave soldiers the film presents. 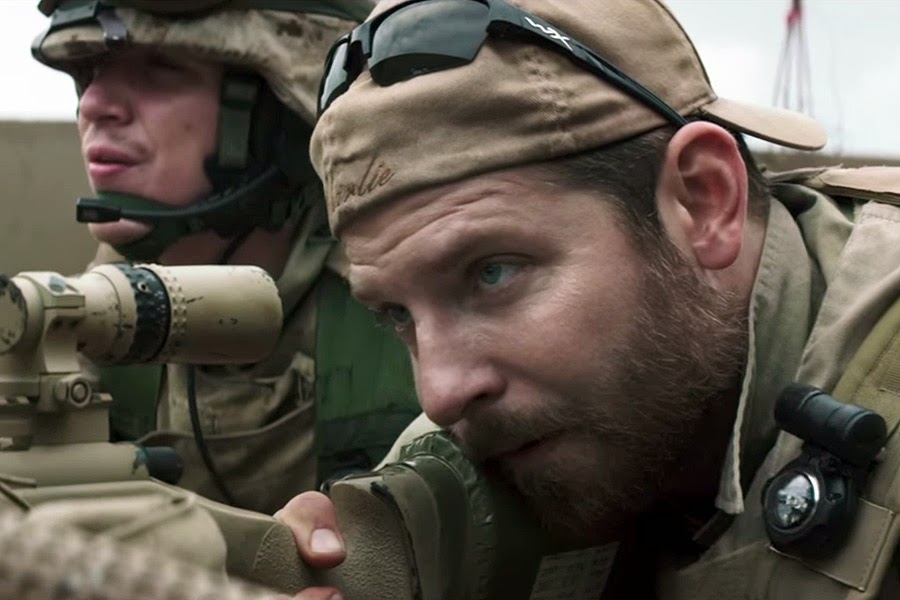 There are some stickier ethical questions presented by the movie, but I choose not to get into those. It is incredibly one-sided in its portrayal of the Iraq War, but I suppose that is because it is being told from the perspective of that one side. More difficult is some of the imagery, such as a young kid having a hole blown through his chest as Kyle's first on-screen kill. It is presented indifferently, as just another reality of war. I can understand that. But the visual is so upsetting and so transgressive -- and presented first in a long series of on-screen deaths -- that I have to wonder why Eastwood wasn't interested in exploring it with any more depth. The kid is armed; it's a "him or us" scenario, so we understand why Kyle has to take the shot. But nothing further than that is explored. Even if, as Cooper says, we're to read the movie as a character study, the moment fails to reflect anything about Kyle's character except that he gets annoyed when another soldier wants to high five him. So I guess he's upset.

Finally, Kyle comes home for the last time and (SPOILERS FOR REAL LIFE) is murdered by a fellow soldier suffering from PTSD. Lest you think that this is actually dramatized on screen or given weight, it is not. The screen fades to black as Kyle leaves for the day (the last of his life) and we're told his fate via a title card. Please understand that I'm not asking to see a reenactment of Kyle's murder on screen. Perhaps it was avoided out of respect to his family. Perhaps it was avoided because the movie wants to look at his heroism and doesn't want us to leave the theater remembering his final tragic moments. But while its inclusion may be seen as in some way necessary -- because it happened, after all -- its treatment as little more than a footnote robs it of the impact that it should have. We should be devastated; instead, we're left with just a feeling of "Wait, what?" 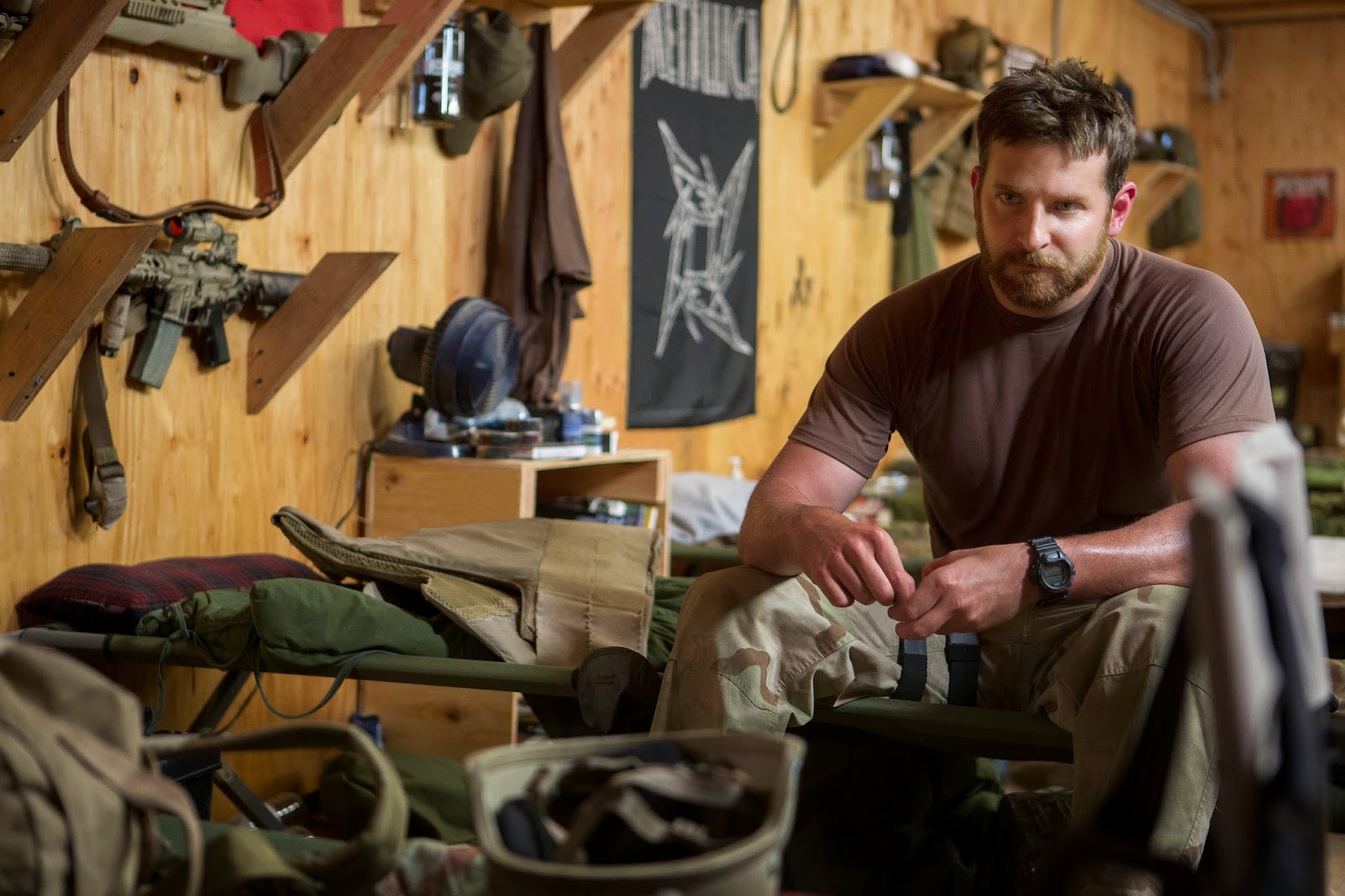 I find myself in the same precarious position I was in a year ago when trying to talk about Lone Survivor, having to criticize a movie based on a real-life soldier without sounding like I'm criticizing the actual events or, even worse, coming off as "un-American." The truth is that there is no winning with some people, who are going to bristle at the fact that I don't think American Sniper is very good and give me shit simply because it conflicts with their worldview. I have to come to terms with that, because the flip side is that I give a mediocre movie a pass because I'm afraid of the ire it will draw if I do not. Trite as it may sound (and I'm in no way making this about me), that's not why Chris Kyle went to war in the first place.

There is a basic competence to the way American Sniper is put together (except for that goddamn baby...), because at this point that's what Clint Eastwood brings to the table. But this is a story that requires more than basic competence; it requires insight and empathy -- or, if not that, the cold remove of, say, a sniper. Instead, the movie settles for the structural beats and drama of a TV movie. We want to tell ourselves that it's good because we want to honor Chris Kyle's memory, but we have to judge a movie on the thing itself and not on the life it's depicting. The hard truth is that the life story of even a war hero can be made into a mediocre film. Clint Eastwood has seen to that.
Posted by Patrick Bromley at 12:00 PM