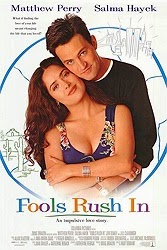 Adam Riske: Fools Rush In (1997, dir. Andy Tennant) Maybe the only good Matthew Perry movie...checking, checking...yep. I've always enjoyed Fools Rush In. It's slight, sitcomy and generic but the two leads have surprisingly good chemistry and the movie is very sweet and just funny enough. I like this movie so much that I once watched it on the TV Guide channel. 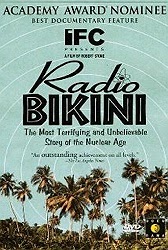 Adam Thas: Radio Bikini (1988, dir. Robert Stone) Coming in under 60 minutes, Radio Bikini could almost be considered a TV episode if it wasn’t nominated for an Academy Award. If you are unaware of Radio Bikini, it follows the evacuation of Bikini Island in the Marshall Islands so that they could be used for nuclear testing from 1946-1963 in what was called the Operation Crossroads. There is very little “new” footage in the movie; it's mostly made up of archival footage and only a few recent interviews. Radio Bikini is very interesting because it doesn’t take sides; however, we end up taking sides because of the increased knowledge we have of nuclear warfare and radiation 40 years later. In 1946, the United States government was almost like a kid with a new toy -- they didn’t quite understand this new weapon they had developed. It is also a very interesting retrospective on a long past time where we believed everything the government said. It's fascinating and has one of the more shocking reveals I’ve ever seen in a documentary. 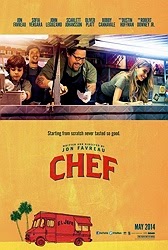 Doug: Chef (2014, dir. Jon Favreau) I'm pretty sure anyone with a Netflix account noticed this movie pop up on their main loading page the day it was released ("Really clever suggestion, Doug! Why don't I just watch HOUSE OF CARDS next!" -you, dripping with sarcasm). However, as Chef made my top 10 list of 2014, I feel I must recommend it. If you're on the fence about the film (or are weirdly unfamiliar with it), check it out. It's a joy -- pleasant and warm. There aren't any traditional villains, it's filled with great cameos, Sofía Vergara has never been cuter (and less annoying) and [wait for it] ... it will leave you HUNGRY (ugh, sorry). If you chose to read it as such, it also has some interesting things to say about movies in general, and director/star Jon Favreau's career in particular. I like this movie. 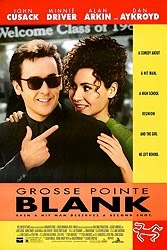 Heath Holland: Grosse Pointe Blank (1997, dir. George Armitage) Grosse Pointe Blank is one of my all-time favorite movies. John Cusack plays a hitman with even more personal problems than professional ones, and things only get worse when he ends up back in his hometown for a high school reunion. In supporting roles are John's sister Joan (adorable) and Minnie Driver (equally adorable) as a former girlfriend with whom our assassin never quite managed to find closure. Add Dan Aykroyd as a rival killer, Alan Arkin as Cusack's psychiatrist, Jeremy Piven as an old high school buddy, and a soundtrack by The Clash's frontman Joe Strummer and you've got the recipe for an idiosyncratic movie that doesn't telegraph every story development and plays out in some unusual, strangely beautiful ways. Can you tell I really love this movie? 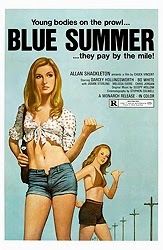 JB: Blue Summer (1973, Chuck Vincent) Okay, babies, allow Netflix Instant Streaming and I to save all of you ten or twelve bucks and about an hour of your lives. Fifty Shades of Grey opens this weekend. Do not go and see it -- I know you want to see it; you want to see what all the fuss is about and perhaps you read the book. Do not be hoodwinked. The first round of reviews have not been kind to Fifty Shades of Grey. Slate's Dana Stevens walked out of it! Resist the temptation to "make an appointment with Mr. Grey."

TANGENT: My local IPic Theater is offering a Valentine's Day special this weekend. If you buy two tickets to Fifty Shades of Grey and a special themed cocktail that costs 11 dollars, you get a free pair of handcuffs. I am not making this up. Why don't they throw in a whip, some duct tape, and a rope and stop being coy about it? Patrick: Dead Snow 2: Red vs. Dead (2014, dir. Tommy Wirkola) I originally reviewed Dead Snow 2 last May, and my praise was effusive or swear-filled enough to land my first-ever quote in a trailer! [/humblebrag] That's not why I'm recommending it! I do not love the original Dead Snow despite giving it a few tries, but thought that Dead Snow 2 delivered on the promise established by the original idea. Is it a GREAT horror comedy? No, but it makes good on some outrageous splatter and really commits to the bit. Tommy Wirkola finally cuts fully loose and makes a ridiculous movie that enjoys being ridiculous. There are things in Dead Snow 2 that I've never seen in a movie before. If you're in the mood for it, this is exactly the movie you want it to be. Also, it's Valentine's Day this weekend and the last scene of Dead Snow 2 is the most romantic thing you'll see in a movie all year.
Posted by Patrick Bromley at 12:00 PM