Off the Shelf: Kiss Me, Stupid (Blu-ray) 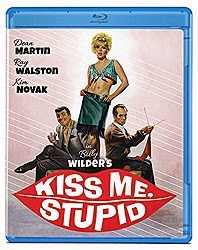 Or: when a director who has made a lot of classics makes a movie that's just ok.

The great Billy Wilder's secret to success was always that his films mixed what he called "the sour and the sweet" -- offering a view of life that could be happy and fun and romantic but always carrying with it healthy dose of darkness. In some cases, a lot of darkness, as anyone who has seen Ace in the Hole can attest. With his 1964 comedy Kiss Me, Stupid, Wilder doesn't bury the lede: even the title is a mix of the sweet (Kiss Me) and the sour (STUPID).


Like a cross between Some Like it Hot and The Apartment, Wilder's Kiss Me, Stupid is a romantic comedy about infidelity and damaged people coming to terms with the reality of their lives. If that doesn't sound particularly funny, it's because it isn't; while the screenplay by Wilder and frequent co-writer I.A.L. Diamond is typically full of clever dialogue and witty wordplay, it's minus a lot of the cleverness and wit. Far less of it lands than usual. This is a rare misfire from one of the greatest filmmakers of all time. 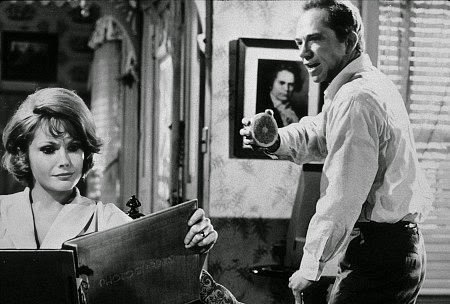 Ray Walston is Orville Spooner, piano teacher and amateur songwriter obsessed with the notion that his wife Zelda (Felicia Farr) is either cheating on him or planning on leaving. When hugely successful singer and TV star Dino (Dean Martin, basically playing himself) gets stranded in town, Orville sees to it that he gets on his good side in the hopes that Dino will record a song written by Orville and his partner, a gas station attendant named Barney (Cliff Osmond). Orville offers to put up Dino for the evening, only Dino has a rule that he has to sleep with someone every night to stave off a hangover. Terrified that Dino will seduce his wife, Orville chases Zelda out of the house and hires cocktail waitress Polly Pistol (Kim Novak) to pose as his wife for the evening, both of them knowing full well that she's being hired to go to bed with the crooner. So the three have dinner together, getting progressively drunker, Dino getting progressively grabbier and Orville progressively less certain he can go through with it.

Maybe Kiss Me, Stupid can be categorized as "lesser" Wilder because of all the concessions the director ultimately had to make -- it is a movie full of second and third choices. Peter Sellers was originally cast as Orville (after Jack Lemmon, real-life husband of Felicia Farr, had to decline), but a series of major heart attacks put him in the hospital six weeks into shooting and Wilder was forced to re-cast and reshoot all of his scenes. Ray Walston is a great character actor, but not someone who generates a great deal of sympathy -- not here, at least. What's left is an unpleasant character who's alternately suspicious of and cruel to his wife, whores out a waitress and sleeps with another woman. There might be a way to make this work in Wilder and Diamond's script, but Walston's portrayal is far too much sour and not enough sweet. 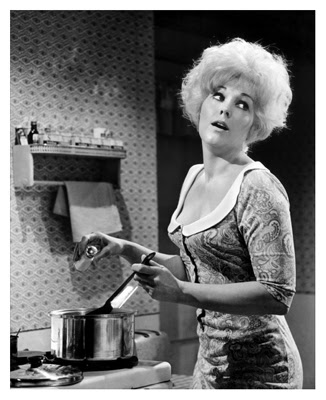 The part of Polly Pistol was originally intended for Marilyn Monroe, which is so obvious it goes without saying. But Monroe was also able to do something on screen that Novak is only able to fake, from the breathiness of her delivery to the sweet spaciness of the character. After Monroe died, the part was going to go to Jayne Mansfield, who got pregnant and had to turn the movie down. Polly wound up played by Kim Novak, on hand less as a character than a force of nature -- an explosion at the sex bomb factory. She's doing Sugar Kane in Some Like It Hot, only slightly dirtier and with fewer double entendres (because here they're single). Nowadays, this kind of part is played by the likes of a Megan Fox, but Novak (and Monroe) do it better because they seem like they have actual life experience. So while we can buy the idea that Polly is damaged in some way -- life hasn't always been good to her, and even "nice guys" like Orville end up taking advantage of her -- Novak's performance feels more like someone doing an imitation of a Billy Wilder character than it does the real deal. 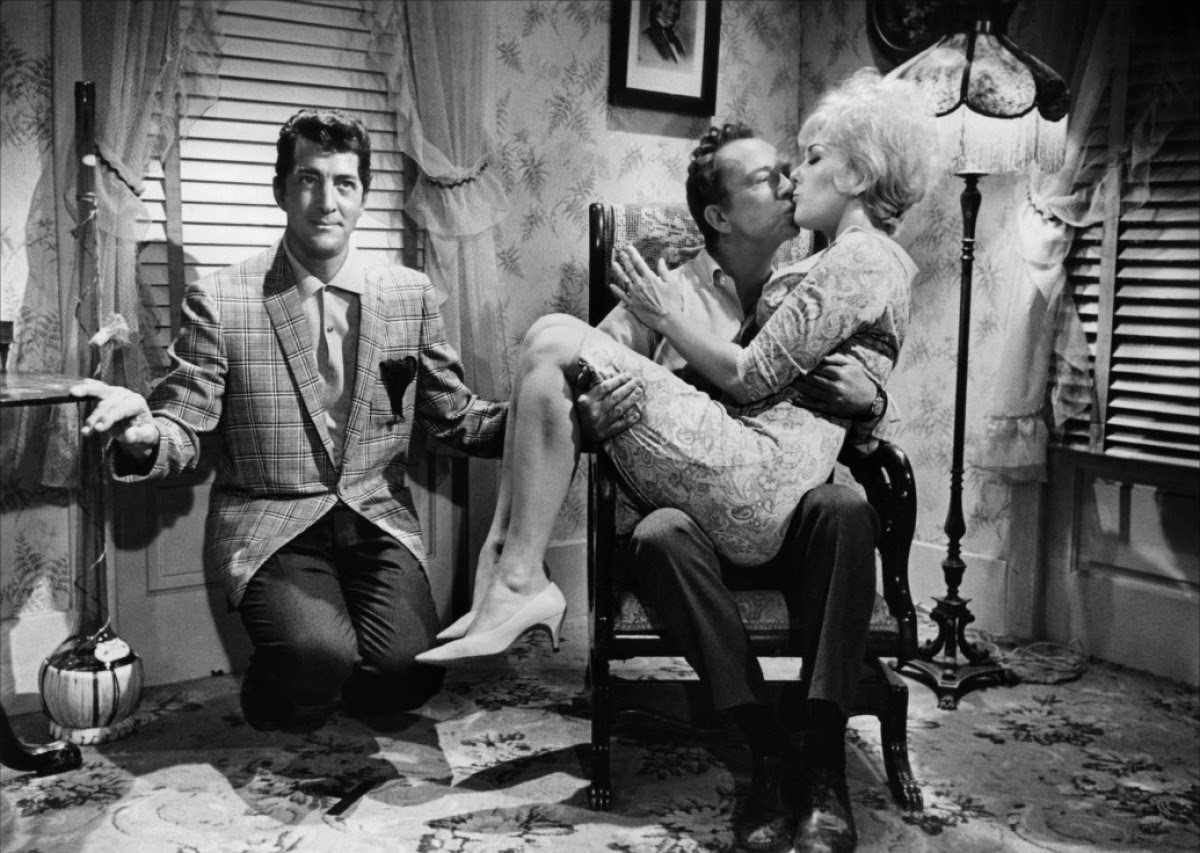 Kiss Me, Stupid's biggest problem is its pacing. Whereas Wilder and Diamond's screenplays are usually an assault of fast, witty dialogue -- a machine gun with an unlimited clip -- their script for Kiss Me, Stupid feels draggy and padded. It's nearly an hour into the movie before the pieces of the story proper begin to really fall into place, which means the film is spinning its wheels with setup and character building that could have been handled in the span of a scene or two (though Wilder, ever the pro when it comes to the callback joke, does pay off a buttermilk gag with typical aplomb). Dean Martin is charming and fun because he's incapable of being anything else, and it's amusing to see him sending up his image when we now know that even that image was a "part" he played for the public. The film is at its best when he's on screen. It's no coincidence that his scenes are the only times the movie happens to be honest about its intentions, either; lecherous as he may be, Dino is the only character with nothing to hide. Interesting that I'm revisiting the movie just a week or so after seeing How to Murder Your Wife (also new on Blu-ray/DVD from Olive Films), as both are mid-1960s comedies in which men are presented as feeling threatened and afraid of women. The difference here is that Wilder and co-writer I.A.L. Diamond know enough to make the men fools for feeling this way. There's still something sort of ugly about the way Wilder handles the material -- yet another variation on "nobody's perfect," only with way more infidelity -- but at least Kiss Me, Stupid seems to have some grasp on its own gender politics.

If you're a fan of the movie at all, you owe it to yourself to pick up the Blu-ray release from Olive Films, which looks positively stunning in 1080p black and white widescreen. The disc also retains Wilder's preferred ending (found on MGM's DVD from 10 years back but previously only available in international versions) and a few brief additions originally cut from the film to appease censors and the Catholic League. The inclusions make the movie more risqué and "adult" -- though positively tame by today's standards -- and represent the film that Wilder set out to make. Kudos to Olive for making sure that the right version lands on Blu-ray.

If it's possible for a filmmaker to have more than one masterpiece (depending on your definition of the word, you might think there can be only one per artist), Billy Wilder is a guy who made a lot of them -- I can name five off the top of my head, with a few others up for debate. Kiss Me, Stupid will never be part of that discussion, as by Wilder's own admission it's a movie with a lot of problems. In the movie's own way, it serves as compelling evidence that what Wilder does so successfully in his best work is really, really tough. The balance is so tricky that even Wilder himself isn't able to get it right every time.