8 That's What She Saids 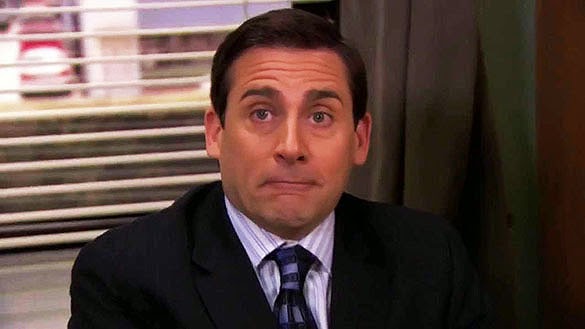 While used much more frequently on TV (specifically, the U.S. version of The Office), versions of "That's What She Said" have been coming out of performers' mouths for almost a century ... said the actress to the bishop.

The modern-day utterance "That's What She Said" has its roots in the British expression "Said the Actress to the Bishop," which dates back to the first decade of the 1900s (i.e., "Edwardian Times"). Obviously, we Americans aren't as erudite as our cousins across the pond, hence our use of the dumbed-down idiom. Alfred Hitchcock's 1929 film Blackmail was the first British "talkie," released less than two years after The Jazz Singer debuted in October 1927. Beginning production as another silent film, British International Pictures decided to film a portion of the movie in sound in order to cash in on the new "Talking Pictures" phenomenon. Unfortunately, the star of the film was Czech-born hottie Anny Ondra. Her thick accent was a problem. In what feels like a scene straight from Singing in the Rain, her dialogue was simultaneously recorded off-screen (while she lip-synched live) by actress Joan Barry. Crazy. Two disclaimers: 1.) the example I'm featuring here doesn't actually appear in the film; rather, it's Hitch himself who voices the phrase during a sound test to lead actress Ondra. And, 2.) he doesn't actually say "that's what she said"; rather, it's a variation on the British version -- only this time, the director states, "You must stand in your place, or it will not come out right: as the girl said to the soldier." As many of you film historians/buffs know, Hitchcock was a notorious prankster with a dirty, wry sense of humor, so it's no surprise that he chose to use a salacious double entendre (while also implying that Ondra sleeps with a lot of men). And, while not in the movie itself, I'd be remiss if I didn't include this historic sound test example on this list. 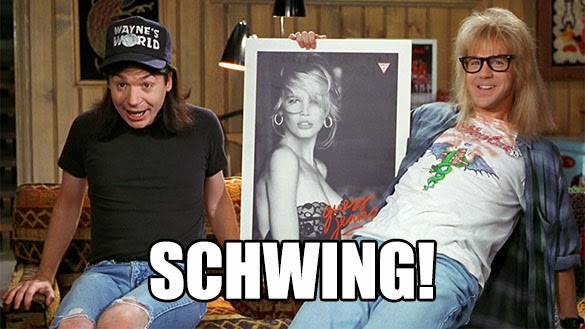 Now this is more in my wheelhouse. Garth Algar (Dana Carvey), while holding a large, sexy picture of Claudia Schiffer, asks Wayne Campbell (Mike Myers), "Are you done yet? I'm getting tired of holding it." To which Wayne replies, "Yeah, that's what she said." According to my exhaustive (not exhaustive) research, this is the very first example of "That's What She Said" in a major motion picture. Are you stunned? Because I'm stunned. I thought, surely, there must be earlier references to this lame cliché in the '80s (and even '70s). But no -- this is it (the "Ur-That's What She Said," as JB might say). And I guess it makes sense. Because, on its surface, the saying is pretty immature. Dumb, even. It takes a Michael Scott (I know, I know -- this website is about MOOOOVIES) to elevate the term to something ridiculous. Sublime, even. Because when Mike Myers says it (with his Sol Ott accent), it just sounds silly.

Listen (LISTEN), we all love Chris Farley (RIP in peace), but this movie is maybe the worst. And I say this as someone who unironically loves Tommy Boy. In the above clip, Haru (Farley) utters "That's what she said" (twice) as the punchline to a joke we're not privy to. No matter -- the point is made. Haru is a loud-talking, joke-cracking wisenheimer. And, before you ask, no -- I have no idea why he's blindfolded in a van. I'm assuming ... ninja stuff? In ... Beverly Hills? Yes. 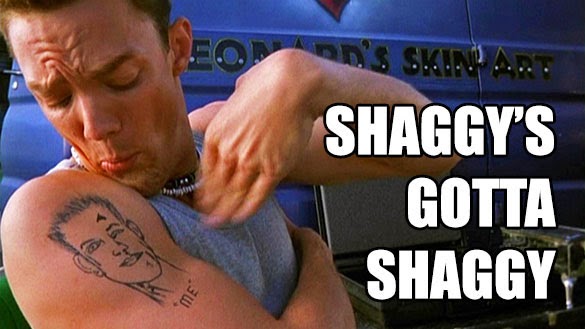 There was a time when Matthew Lillard was a pretty big deal -- funny, physical and self-aware (see She's All That). "He's the next Chevy Chase!" you once declared to your mom, interrupting her as she watched the first season of The Apprentice. "Didn't you say the same thing about Carson Daly?" Touché Mom. TOUCHÉ. Not surprisingly, Without a Paddle did nothing to propel Lillard's career to the next level. That would've been ... Scooby-Doo? And, honestly, I'm jealous as fudge. Guy never needs to work again -- he's got that phat Shaggy cash rolling in NONSTOP. If you get one hit like that, you're set. And here I am, like a monkey, pounding away on my computer, for what? FOR WHAT? Anyway, in this instance, Tom Marshall (Dax Shepard), urging his friend Dan (Seth Green) to climb through a hole, shouts, "Come on, Dan, you're the only one small enough to get through." To which Jerry Conlaine (the GREAT Matthew Lillard) quips, "That's what she said." And there you have it.

I haven't seen this movie since I saw it (quote me on that), but I remember liking it. Something about fun and action and nostalgia and adventure. Probably because it's based on a 1965 film of the same name (which itself is based on a 1964 novel by Elleston Trevor). But I might be (could be [am]) wrong. Regardless, in this scene, A.J. (Tyrese Gibson), IMPERSONATING BILL COSBY, prepares for takeoff by reading through a preflight checklist. He states, as Cosby, "Water injection." To which Frank Towns (Dennis Quaid) IMPERSONATING BILL CLINTON, replies, "That's what she said." The filmmakers are SO PLEASED with this bit, that they give it a name. They call it "The Two Bills." And, NO, it totally isn't embarrassing and it doesn't date the movie and I don't want a refund 11 years later. All those things. 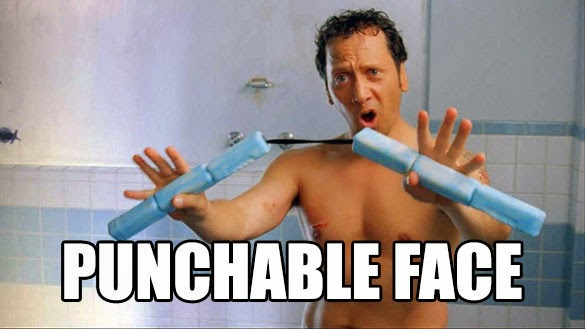 This is a movie. And it's DIRECTED by its star, Rob Schneider (his first effort). And no one saw it. Well, enough people saw it to give it nearly $8.8 million at the box office (with a budget of $7.5 million[!]). I can't even imagine that much money. But Rob Schneider gets that much to make a shitty film. And here I sit, like a sucker, just clacking away on my keyboard, for what? FOR WHAT? The Master (David Fucking Carradine, after surely losing a bet): "Next time use more tongue." Stan Minton (Schneider): "That's what she said." And then The Master punches Stan in the stomach. Aaaand ... SCENE.

Usually, Danny McBride can make any line work. Especially if it contains profanity (he's like Bob Odenkirk that way -- dude knows how to sell an expletive). Not so much here. The scene feels flat, is my point. But according to Nick Swardson, the line (and its repetition) wasn't scripted: "I started saying [that's what she said] in the scene at the pool -- that whole scene was really improvised -- and I threw it out there, and after that, I kept putting it in scenes. I just kept saying it. Then, when we had finished all our scenes, I said, 'Can I say it one more time? I think it would be really funny to tie up the whole movie.' When we test-screened the finished film, that final line played fucking huge, in that final scene, so we were really psyched about it. It paid to call it back!" He said it played huge. Hmmm. I might have to disagree with Mr. Swardson.

I have not seen this movie. No one has seen this movie (although it does not look like the worst). But there it is -- BAM -- right there in the title. So include it I must.
Posted by Patrick Bromley at 2:00 PM