The Overlook: The Swimmer

The Swimmer is an odd duck. The Swimmer is just the type of movie that columns like "The Overlook" (such as this one) were born to talk about. For ages... and for the posterity of films that could very well be lost for all posterity, for both all ages and for THE ages, for the United States of America. Amen.

I think you know what I mean, babies. 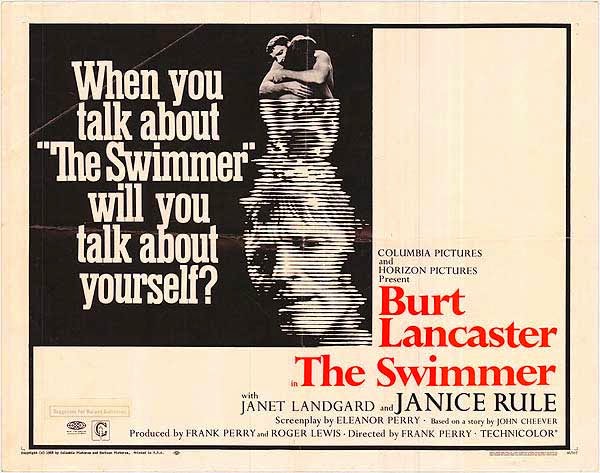 The Plot In Brief: Ned Merrill (Burt Lancaster) shows up at the home of a distant neighbor, wearing nothing but a blue swimsuit. He asks his hosts, who are sitting around the pool and nursing hangovers from the night before, if he can swim in their pool. They give him permission and fix him a drink. Ned observes that there seems to be "a river of pools" that leads all the way to his house. He decides to "swim home."

As Ned makes his way from house to house, neighbor to neighbor, and from pool to pool, we meet more of his friends and acquaintances and learn troubling things about Ned. "What's the deal with Ned?" seems to be the question the filmmakers want the audience to ask. In answering this question, the film works to reveal something deeper about human nature (if the movie works for you)—or swimming, I guess (if it doesn't.) For me, it works.

The Swimmer is based on a short story by celebrated author John Cheever. I sometimes wish that more feature films were based on short stories instead of novels. Lately, several long novels like Fifty Shades of Grey have been turned into long films; short novels like The Hobbit have both been turned into even longer multi-part films. (Note to self: write logline for new movie called Fifty Shades of Gandalf the Grey.) But could it be that the short story format contains the perfect amount of material, plot and dialogue, for the average ninety-minute Hollywood film? I'm thinking of Stephen King's short story collection Different Seasons; three of its four stories became the movies Stand by Me, Apt Pupil, and The Shawshank Redemption. 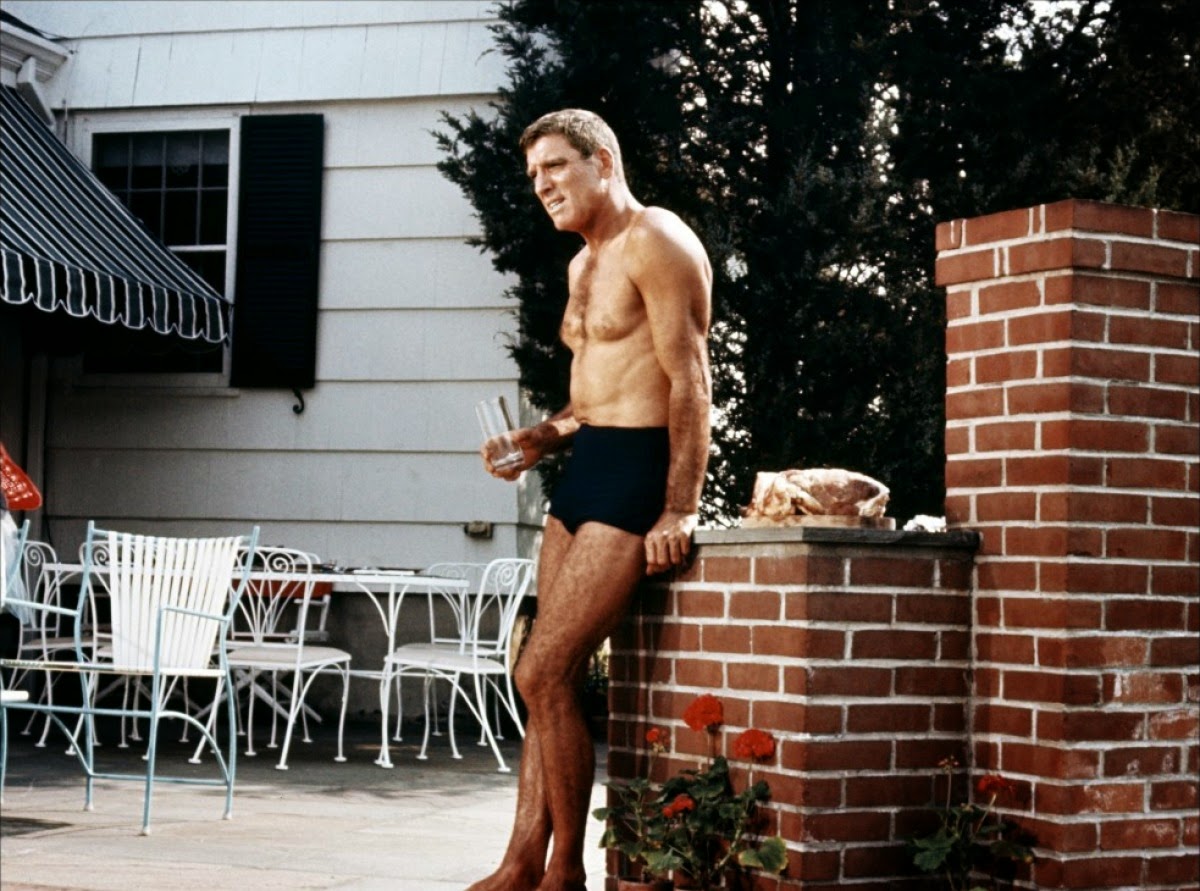 TANGENT: A related problem is something I will now term the "short film conundrum." As a film teacher, a former film student, and the father of a film student, I have seen more than my share of short student films. From the nascent works of ambitious fifteen year-olds to the shorts nominated for Oscars, short films face a common problem: exactly how much plot, story, and dialogue should their brief running times contain? If feature films sometimes get it wrong by trying to fit whole novels into one sitting, I would argue that most short films get it wrong, too—being either crazy abridgements of feature-length scripts, or tedious exercises in blowing up a two-minute idea into a twenty-minute film. Yet, as I state above, I think The Swimmer gets it just about right. Here is an incomplete list called "Reasons I Love The Swimmer"

1. The film is odd in a way I love and find hard to categorize; it is both surreal and grounded in reality. Let's call it "Ultra-Surreality!" The events in the film are both completely plausible and highly implausible; they can't be happening, and yet they're happening right in front of our eyes. Like the recent The Babadook, the film works as both metaphoric conceit and literal narrative at the same time. As we have discussed on the podcast ad nauseam, you've got to hand it to any film that manages to be more than one thing. Most films have a hard time being anything at all.

2. The Swimmer's color cinematography is beautiful and well observed, especially on the new Blu-ray, which pops, babies. Believe me: it pops. I've always been drawn to 1960s cinematography: the saturated colors, the palpable sense of place, amazing deep focus, and a sensitivity to both tone and texture. A relatively small group of old-school cinematographers were really at the top of their games during the 1960s, and they could give even schlocky films a special look and sheen. Witness the recent Olive Films Blu-ray releases of two Beach Party movies with gorgeous color vistas courtesy of David Crosby's father, Floyd! This was just before movie studio budget cuts and new, workman-like DP's ushered in an era (era) of that flat, made-for-TV look with its ugly lighting that was predominant in the 1970s.

3. The Swimmer is one of the few films featuring Joan Rivers. She has a cameo. Take that, Academy! Joan Rivers also wrote and directed the little-seen film Rabbit Test, and for decades she interviewed celebrities on the Oscar red carpet. Why, oh why was Rivers not included in the "In Memoriam" montage at this year's Academy Awards? Phooey. 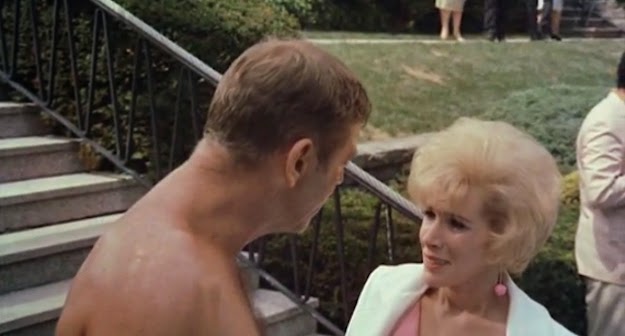 4. The Swimmer is the first film ever with a score by Marvin Hamlisch. It's a beautiful score, simple and evocative. Hamlisch explains in the "Making Of" documentary included on the new Blu-ray release that he wanted the spare opening theme to resemble the sounds of lapping water. He succeeded.

5. What other actor would ever brave the part of Ned Merrill save Burt Lancaster? From what I've read, it seems most actors are vain; but what actor, classic or modern, would agree to go an entire movie limping around in nothing but a small bathing suit? Needless to say, Lancaster is ripped.

6. I both mock my suburban lifestyle and enjoy it. And fear/regret/revel in/am bored by/am comforted by it. I loathe its shallowness; I love its convenient free parking. The Swimmer is one of the few films that gets that weird zeitgeist right. This is how rich white people behave. Sometimes it is scary when someone refuses to leave your pool party or the sandwiches and liquor are not delivered on time. Or your half-naked neighbor shows up and cheerfully loses his mind right before your eyes.

8. Producer Sam Spiegel (Bridge on the River Kwai, Lawrence of Arabia) was not happy with the film director Frank Perry finally turned in and messed with it in post-production. Spiegel actually hired Sydney Pollack to reshoot some scenes with different actors. Pollack reshot an important scene between Lancaster and co-star Janet Landgard, as well as a scene late in the film between Lancaster and Barbara Loden. Spiegel and Pollack replaced Loden with Janice Rule and radically changed the tone of that scene. As you watch The Swimmer, you can play a fun game as it unspools: "Original or Reshoot?" Spiegel also ordered a happier ending shot, though it was never used. Given that The Swimmer is essentially a tragedy, did Spiegel even have a clue about the film that he himself was supposedly producing? Spiegel later had his name taken off the film.

9. The Swimmer eschewed fabricated sets in favor of real people's homes and, like many films made in the past in genuine locations, there is an aspect to The Swimmer that seems almost documentary. The film showcases fashions, pop culture, vocabulary, and attitudes of a specific time and place, and accomplishes this specific feat so admirably that it serves as a time machine to the affluent East Coast in the late 1960s. 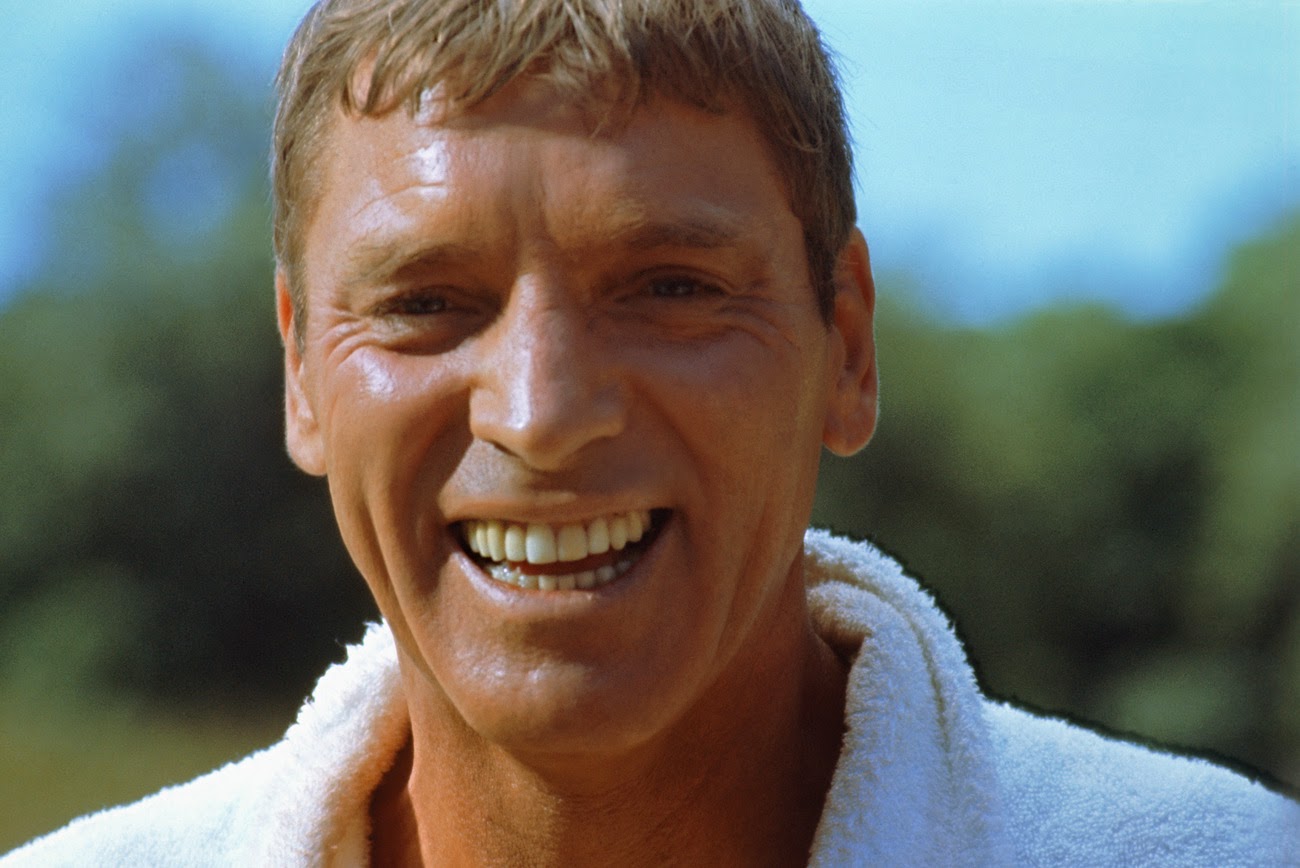 This new release of The Swimmer features a "Making Of" documentary that is almost ninety minutes longer than the film it documents. If you're going to watch it, babies (and although it is TOO LONG, I recommend that you do,) make sure going in that you have that much time to spare.

The Swimmer seems to be the kind of archival release that we should all be supporting. Grindhouse has here resurrected a true obscurity, a real cinematic sleeper, and restored and presented it beautifully. This is a much more noble gesture in the history of film than the 16th fucking Blu-ray repackaging of Halloween. And I say that as someone who loves Halloween!

I also love The Swimmer. One day, I might show up at your home in my embarrassing Speedo and ask to "swim across your pool." Know now -- that is a euphemism.