This or That: RoboCop vs. Starship Troopers 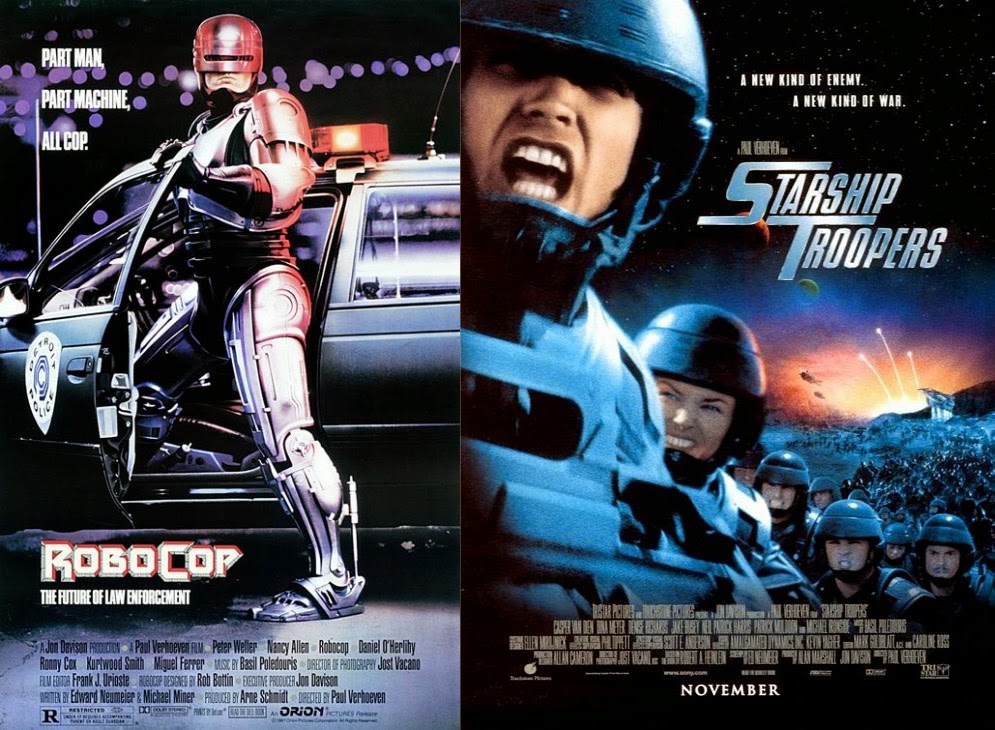 Which Paul Verhoeven sci-fi masterpiece do Doug and Patrick each like best?

Patrick: Douglas, let's get real. I know we've only done this column once before, but you've had it too easy for too long. When we first started kicking around the idea for this column months ago, it was in the service of the following debate: THIS OR THAT: RoboCop or Starship Troopers?

Doug: This one's a no-brainer for me. And by "THIS" one, I mean "THAT" one. So, THAT: Starship Troopers. I mean, it is one of "Doug's Favorite Movies." I would be some sort of bug sympathizer if I didn't pick it here. For me, it's the perfect blend of action, politics, satire, comedy (perhaps unintentional), gestapo imagery, boobs, Mazzy Star and Doogie Howser (before he shit the bed at the Oscars).

Listen (LISTEN), I know you're a fan too. A huge fan. And the movie is a big part of our shared history. So, tell me (I'm genuinely curious), are you about to throw away 20 years of friendship over fucking RoboCop?

Patrick: Unfortunately, this THAT is my answer. I have to go with RoboCop. Listen. LISTEN. I love Starship Troopers. There is not a complaint I can level against the movie save the auspicious lack of Carmen Ibanez nudity. But if I'm only going to be able to revisit one of the two movies in the future, it's RoboCop. 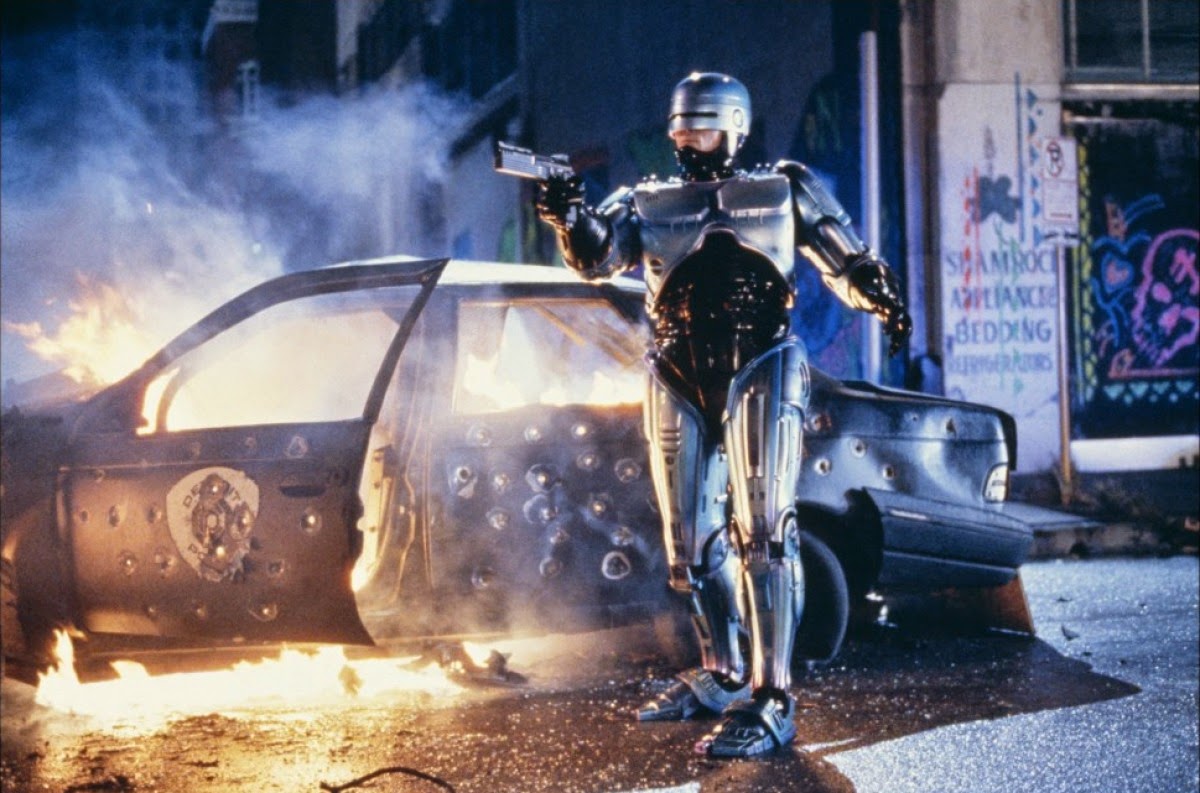 For me, RoboCop does everything Verhoeven would do again with Starship Troopers but gives me a little more to grab on to, emotionally speaking. I don't think the satire is as great as it is in ST, but it's still pretty great. I can get more invested in the plight of Alex Murphy than I can in Rico's Roughnecks (by design; they're supposed to be cardboard cutouts). And as great as the bugs are in Starship Troopers, I have a hard time picking better villains than the ones in RoboCop.

Although it could be argued that the humans are the villains of Starship Troopers. Do you think...do you think we're them? ARE THEY US??

Doug: Well, we had a good run. I hope you have a good life with RoboCop, and have, like, ten thousand of its babies. In fact, next time you and RoboCop go on the swing set together, if I see your swings match up (EVEN FOR A SECOND) I'm going to tell everyone that you're MARRIED.

Another RoboCop disconnect for me was that I didn't grow up with it (like, I assume, you did). It was a pretty verboten movie in the Schultz household, and for good reason too -- it's crazy violent! No way nine-year-old Doug should be watching a dude get his hand blown off by a shotgun. But 19-year-old Doug is TOTALLY FINE watching a dude get his brain sucked out of his skull by a giant bug. It's called growth and maturity and look it up.

Question: can you sit down and watch RoboCop any time, no matter what? Meaning, will you stop to watch it if you stumble upon it on IFC (ubiquitous commercials and all)? Or at midnight on Christmas Eve? Post-coitus? DURING a funeral? Is it THAT kind of movie for you? Because Starship Troopers is all that for me (and more!). 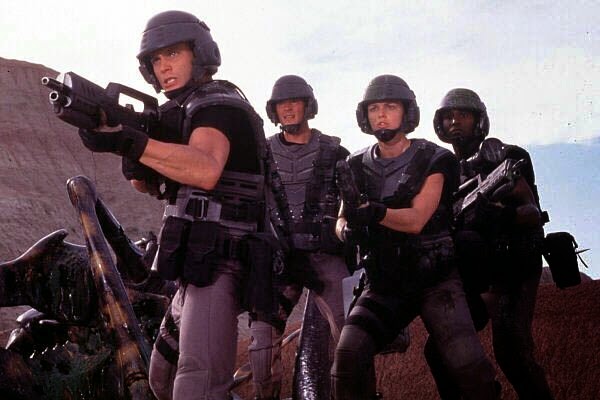 And here's the deal with the lack of Carmen Ibanez nudity ... if you're a true fan of Starship Troopers, you've no doubt seen the movie's deleted scenes. And, while she's not topless (that's why we have Wild Things), there is an interesting clip of her in a see-through bra. So that's something. And don't tell me that the random flashes of anonymous naked women in the background of select RoboCop scenes is good enough for you. I know for a fact that it's not. A horndog like you will NEVER be satisfied with such paltry offerings (from Paul Verhoeven, no less!).

Patrick: RoboCop is exactly the kind of "watch anytime" movie for me. Starship Troopers pretty much is, too, so there's that. We have that.

Again, it's not an easy choice. When we did the original Dawn of the Dead vs. the remake, it was a no-BRRAAAINSer; I really like the remake, but if you told me I could never see it again I would probably be ok (even though I want to see it again!). Not the case with Starship Troopers vs. RoboCop; I want both of them in my life all the time. BUT if the point of this HUGELY SUCCESSFUL column is to choose THIS or THAT, I have to come down on the side of RoboCop. There is not one thing about that movie that I don't love. Except Nancy Allen's haircut.

Do you feel any kind of emotional connection to Starship Troopers? I'm not asking you to defend your love of it. I get that. I GET THAT. Now I'm just enjoying talking about these movies.

Listen ... I don't know -- I JUST, DON'T, KNOW. I mean, do I feel connected to any of the characters? Sure, but not in the same way I feel for George Bailey. Am I sad when Diz dies (spoilers!) in Rico's arms? A little bit. But I'm also SO AMAZED by the complete lack of any discernible emotion on Rico's face, that I'm quickly over it. I mean, she says "I LOVE YOU" seconds before she dramatically croaks, and Rico doesn't have the sack to say it back. So is it fair for the filmmakers to ask for an emotional response from their audience when the lead actor seems incapable of emoting himself?

Haaaaa, now it just sounds like I'm bagging on Starship Troopers, but I'm not! Honestly, it's this disconnected quality that I find so fascinating. Verhoeven took a bunch of beautiful WB/90210 actors, and stuck them in dense, satiric military sci-fi film filled with fascism and CGI bugs. It's all too perfect. 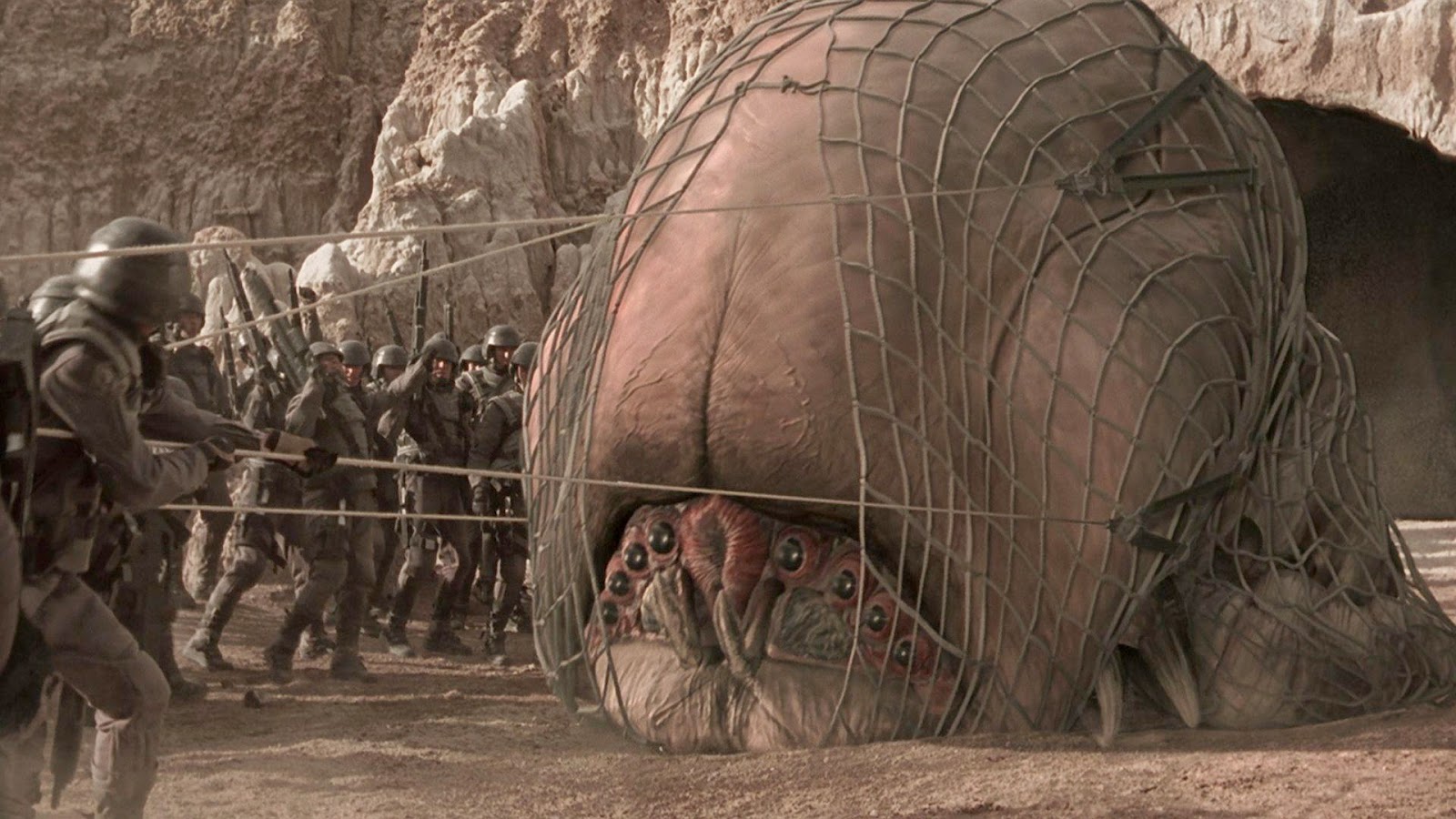 But maybe I'm missing your point -- do you feel an emotional connection to RoboCop? And, please, show your work.

Patrick: I do! For as much of a badass as RoboCop is, Alex Murphy is a tragic figure. It doesn't make RoboCop a "better" movie, because I completely agree with you -- the lack of emotion and Archie comic thinness of the characters in Starship Troopers is totally by design and part of the movie's crazy brilliance. It just makes RoboCop a different movie in that respect. And because it's so similar in so many other ways (the violence, the satire, the haircut on Nancy Allen that is also the haircut on the Roughneck who's all "I want to have babies..." and is also the cigar girl in Swingers), I'm trying to figure out why I prefer one over the other, even if it's only by degrees.

Will the Paul Verhoeven we love ever make another movie like either of these?

Doug: Honestly, I think Paul Verhoeven is done with satire. I think he's more interested in sexy thrillers and EXPLORING THE HUMAN CONDITION (by which I mean directing sexy thrillers). Unless Elle (coming in 2016!) has something political to say (it probably doesn't), the Verhoeven we're stuck with now is one that has moved beyond what drew us to him in the first place.

Judging by his resume, it also appears he's done with the American "blockbuster" system of moviemaking. And that's fine too! I'd rather he continue to create obscure European films than get destroyed by studio hacks watering down what makes him so special in the first place.

But let's go back to what you said about villains ... I'd argue that the villains in RoboCop are just really horrible humans (like, the worst). And haven't we seen truly terrible humans in both movies and in real life a million times before? My point: I don't think I've ever seen anything as suffocatingly scary as the bugs in Starship Troopers. The aliens in Aliens comes close, but the sheer quantity and relentlessness of the Arachnids makes me hyperventilate.

So what makes Red Forman so scary?

Patrick: It's not that Clarence Boddicker or Dick Jones are SCARIER than the bugs, because you're right -- they are terrifying in their numbers, in their relentlessness and in their sheer MURDER POWER. When you stand back and watch the action between the soldiers and the bugs, it's a bunch of gory GCI action and fun. But when you actually put yourself in that position and think about what it would be like to be on an angry planet -- a bug planet -- it's the scariest thing ever. 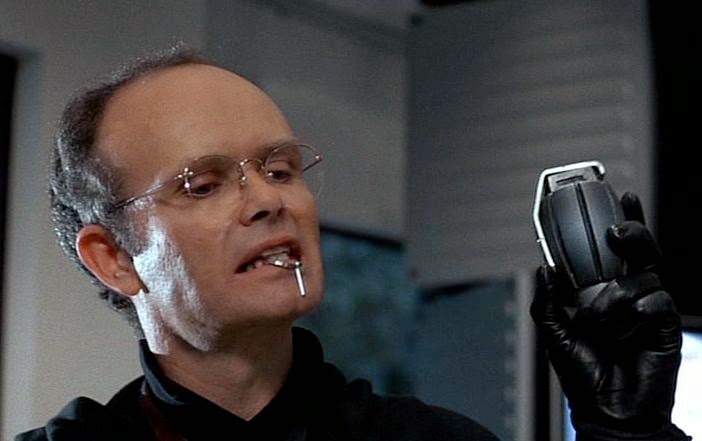 I just prefer the RoboCop villains because they are actual characters with personalities. The bugs of Starship Troopers are just that -- they're mindless, faceless cockroaches ("Bite your head off, man..."). The villains in RoboCop are more entertaining because they're such bastards and they love being villains. They're some of the most colorful, hateful bad guys in any movie ever.

But again we're arguing two greats, and we're lucky to live in a world in which both movies exist.

Doug: I agree -- we're lucky to have both movies. And your impassioned defense of RoboCop makes me want to go back and watch it again RIGHT NOW. I'll admit that it's a movie I'm not intimately familiar with, but I plan on remedying that soon. So, THANKS?

Where should I start? With the 2014 remake? Because I've heard that's GOOD.

Patrick: Here's the order you should go in:

Anything else? Any last words on the matter? Because after this I'm going to kill you. RoboCop style. Because that's the one I picked. I'm committed to the bit.

Doug: You can TRY to kill me, but Omni Consumer Products will just revive me as the next gen superhuman cyborg law enforcement officer. And then I'm coming after you. 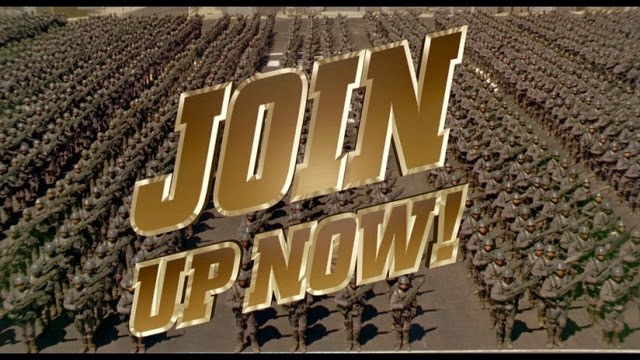 Got a suggestion for a future This or That? Leave it in the comments below!
Posted by Patrick Bromley at 5:00 AM

Email ThisBlogThis!Share to TwitterShare to FacebookShare to Pinterest
Labels: paul verhoeven, robocop, sci fi movies, starship troopers, this or that