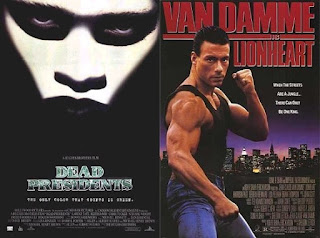 For this installment, Adam Riske and I got into the spirit of Junesploitation with some ‘90s action. Adam watched Dead Presidents (1995) off of my unwatched list, and I saw Lionheart (1990) for him. We felt way better after getting a dose of strangely patterned suits, unnecessary profanity, and gratuitous violence.

Adam Riske: I remember my sister went to see Dead Presidents in theaters and I was jealous of her back in 1995 because she was seeing a movie (that I sort of wanted to see) before me. I also listened to the soundtrack a bunch when I was in high school. You should check that out too. It's pretty terrific.

Mark: I’d like to think that I’m a Jean-Claude Van Damme completionist (turns out I’m not), but this was right at the beginning of his run of popularity, two years after Bloodsport, so I was curious about it, as I was with all things JCVD. Now I’m also curious about what your sister thought of Dead Presidents.

As action movie buffs, if you found these movies so interesting, then why hadn't you gotten to watching them yet?

Adam Riske: By the time Dead Presidents was on video I was on to other things and I pretty much forgot about it.

Mark: This movie blended into the background of other JCVD and '90s action movies, so I probably thought that I’d already seen it, when I was actually remembering Kickboxer or Hard Target. I get movie amnesia. 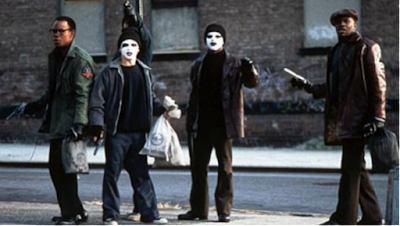 Adam Riske: I'm not sure if you're a Chris Tucker fan or not, but it has a great performance from him. I think you'll like the movie because you appreciated Boyz N The Hood and this is another movie like that where young, hungry, out to prove themselves African American filmmakers swung for a home run. I'd say Dead Presidents is a solid double.

Mark: You get the trademark slow roundhouse to the face, along with a bevy of '90s hench/stuntmen, like Brian Thompson and Abdel Qissi, and Deborah Rennard plays her part with all the relish and wardrobe of a Bond villain (with a considerable lady boner for JCVD).
What did you guys not like about you watched?

Adam Riske: I'm not sure Larenz Tate is the best lead for a movie like this. He seems a little out of his league in certain scenes, as if he's "acting" tough as opposed to being tough.

Mark: This movie deals heavily in the market of '90s action tropes, but you should know that going in. There’s quite a few shortcuts in the narrative (like, who the heck is betting on these underground fights?), but the movie is critic-proof. If you are into Van Damme and what he stands for, then you’ll generally like it. If not, then you’ll correctly point out every flaw. Like, why is the head of the French Foreign Legion speaking with a German accent? Why are you fighting next to a pool in a leotard?

Adam Riske: The guy who played the Schofield Kid in Unforgiven is in this and he's barely in anything.

Mark: Director Sheldon Lettich takes a lot of credit for this being the movie where Van Damme gets to have considerable dialogue and character development . Also, where he shows his butt. Also, Ashley Johnson, who plays the niece, is also the waitress that Cap saves in The Avengers.

Dead Presidents and Lionheart are comparable to what other movies?

Adam Riske: Can I answer it this way? I like it more than Menace II Society (the debut from the Dead Presidents directors) but I recognize Menace is a better movie. Dead Presidents is more ambitious and larger in scale.

Mark: Lionheart is comparable to lots of other period Van Damme; I’d put it ahead of Double Impact and Hard Target and Death Warrant but behind Kickboxer or Bloodsport or Universal Soldier. Don’t make me choose between these. 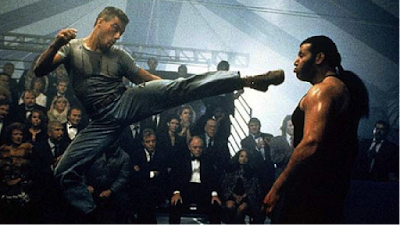 If you are planning a marathon of three movies and one of them had to be the movie you watched, what other two movies would you put in the marathon, and why?

Mark: To round out your '90s Action day of Junesploitation, how about some of my inexplicable favorites that are very, very 90s: Sniper (1993) and No Escape (1994).