Off the Shelf: Stone Cold (Blu-ray) 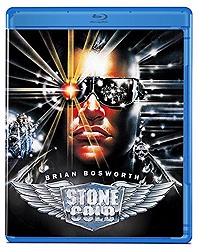 If you're any kind of fan of '90s action movies, this one is an absolute necessity.

I'll try to keep this short. I'm not going to go on and on talking about the greatness of 1991's Stone Cold, the film that tried to turn former Seattle Seahawk and legendary flameout Brian Bosworth into an action star. I've already written about that, which you can read here. Instead I'll just express my excitement that the movie is finally available on Blu-ray (thanks, Olive Films) after spending years out of print on DVD, with copies fetching upwards of $50 on Amazon and eBay. Now there's no excuse not to have it in your collection. You'll thank me later.

As most mainstream action movies (which, by the way, is a dying breed, having been replaced primarily by superhero movies and big budget tentpole films) get further away from the kinds of things that defined '90s action cinema -- iconic heroes, practical stunts and first-rate 2nd unit work -- films like Stone Cold continue to age better and better. Sure, it's a product of its time (1991 to be exact, otherwise known as the best year for action movies ever) if for no other reason than the casting of Bosworth in the lead, but director Craig R. Baxley makes movies that are both incredibly efficient and accomplished while still making a movie that's deliriously over the top. He directs movies with lunatic competence. 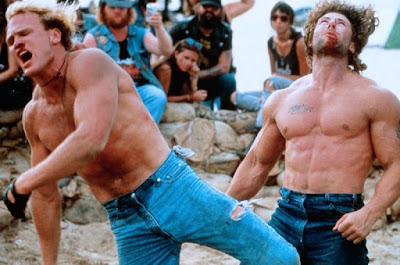 Stone Cold has it all: bikers, bloodshed, babes, Bosworth. There are giant lizards and men in bikini briefs. There's Lance Henriksen and William Forsythe trying to out crazy each other. There's Sam McMurray playing a cop. It's not an action movie that moves in fits and stars, coming to life during the fights or shootouts and then grinding to a halt in the expositional scenes. It's entertaining all the way through, in part because of the colorful subculture in which the movie is set and in part because Baxley directs the whole film at the same wild, rowdy pitch. You can practically smell the beer and cigarette smoke and bike exhaust and the Bosworth.

The movie was a flop when it was released in 1991, grossing just $9 million on a budget of $25m. It has since discovered a life on cable and home video, having become a cult classic of the genre and completing Craig R. Baxley's trilogy of awesomeness (a triptych that also includes Action Jackson and I Come in Peace). I can see this being a movie that required time to find its audience; it's too hardcore for the fair weather genre fans and got lost amidst the shuffle of great action movies released that year. I'm happy to see this particular wrong being righted, even if it has taken almost 25 years to get there. 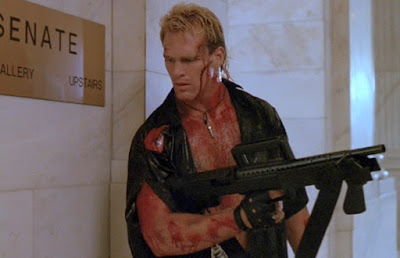 Stone Cold's release on Blu-ray means that now all of Baxley's movies are available in HD, proof that we are living in the best of all timelines. Part of me never thought this day would come, but here we are. It's '90s Action Day for #Junesploitation and Stone Cold is on my Blu-ray shelf. Make sure it's on yours too.