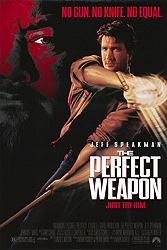 He's got the power!

Since I started writing these columns a few years ago, no movie has been requested more for the #HeavyAction treatment than 1991's The Perfect Weapon, Hollywood's attempt to make international Kenpo champion Jeff Speakman into the latest action hero. Well, it's '90s Action Day for #Junesploitation and there's no better time to give this movie its long overdue consideration. This is a very '90s action movie.

Why do some action stars catch on and others don't? It's a question I've brought up before here in Heavy Action, but it's worth revisiting when talking about The Perfect Weapon, as it's just the kind of movie designed to create a new action star in Jeff Speakman. The film was released in 1991 at the peak of the genre's Golden Age, when nearly every action star was at the height of his (because they were pretty much all men) power. Familiar favorites like Stallone and Schwarzenegger were still kicking much ass, while upstarts like Van Damme and Seagal were really on the rise and making the best movies of their career. This is the year that saw the release of Point Break and The Taking of Beverly Hills and The Last Boy Scout. There was a major market for theatrical action films, and the success of previously untested quantities like Seagal and Van Damme gave filmmakers the confidence to create new stars from scratch. Into this marketplace entered handsome, bestubbled, lightning quick amateur actor Jeff Speakman. 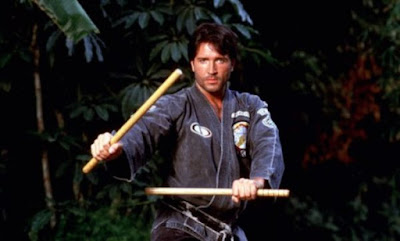 Chicago-born Speakman (District 214 represent!) plays Jeff Sanders, a construction worker who was banished from his home at a young age by his cop father (Beau Starr of Halloween 4) for having a bad temper and being a bad influence on his younger brother Adam. Jeff returns to his old neighborhood to visit Kim (Mako), a shop owner who acted as his father figure and was instrumental in Jeff learning the martial art Kenpo as a kid. Unfortunately, Kim is murdered by a hitman (Professor Toru Tanaka) working for the Korean mob, leading Jeff down a path of revenge to find out who is responsible for the murder and to settle the score. In this he receives help from his estranged brother Adam (John Dye, the floppy-haired love child of James Spader and Judge Reinhold) and a young kid (Dante Basco, Rufio from Hook). Oh, and Mariska Hargitay shows up as the adult version of a girl with whom Jeff used to train, but I'm pretty sure she never speaks in the movie. There's that.

I didn't grow up with The Perfect Weapon. I remember it playing in theaters and I remember the ad campaign that prominently featured "The Power" by Snap! (which also plays over the beginning of the movie). But it wasn't until so many readers began requesting the movie that I finally tracked down a copy and watched it. That was well over a year ago, but I'm actually glad I didn't write this column after seeing the movie the first time. I thought it was just ok -- that Speakman was stiff and the beats were familiar and there are aspects of the movie that are ludicrous. A second viewing helped rid me of most of those hangups, and seeing the movie again this week made me like it a lot more; I'm not ready to crown it one of the best action movies of the '90s, but I think it deserves to be part of the conversation. I'm sure it helps that it's short; like Stone Cold, another great '90s action movie (from 1991, no less), The Perfect Weapon clocks in at under 90 minutes. 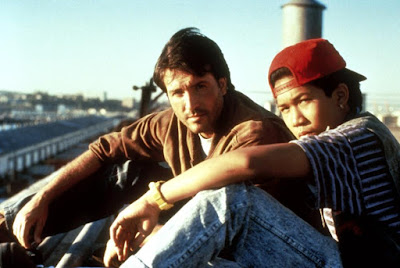 One of the coolest things about The Perfect Weapon is that it's the only mainstream action movie I can think of that demonstrates Kenpo, a martial art I haven't seen much before or since (notice the distinction between "I have seen" and "only one that has ever existed," as I'm sure there are others). This was a time when action stars actually brought something new to movies, whether it's Speakman showing us Kenpo or Steven Seagal bringing us Aikido or Jean-Claude Van Damme helping usher Hong Kong cinema into the U.S. by working with directors like John Woo and Ringo Lam. The inclusion of Kenpo helps distinguish The Perfect Weapon, which would otherwise be hard to tell apart from other action movies of the period. As a fighting style, it takes some time to get a handle on it. The movie opens with a very long training sequence in which Speakman does a bunch of moves and the whole thing plays like a Kenpo demo reel. There are a lot of hand movements that seem extraneous and we can't quite picture what the whole thing will look like in practice. About 15 minutes into the movie, though, we get our first real demonstration of Kenpo when Speakman is randomly attacked on the street by some muggers (in a sequence that exists only because there hadn't been an action beat for a few minutes). He makes incredibly short, handy work of all three of them, and when we finally see just how incredibly fast and efficient he is at beating the shit out of them, we finally understand Kenpo. Ohhhh...so THAT'S what the hand movements are for. It's awesome.

I've even come around on the training sequence at the beginning. I like that The Perfect Weapon knew it was going to be "the Kenpo movie" and that Speakman would be the Kenpo guy. If part of the goal of the filmmakers -- including Speakman, director Mark DiSalle and screenwriter David C. Wilson -- was to introduce the martial art to American audiences, it makes sense to put that mission statement right up front. It's a big part of why action fans are still talking about the movie today. 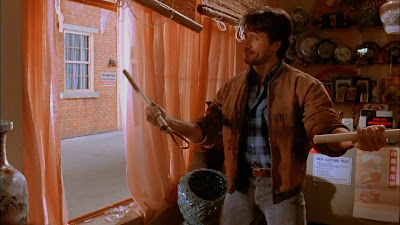 When he's not fighting, Speakman is...fine at best. He's certainly got movie star looks but not a ton of charisma; I can totally understand why some producers wanted to make him an action star but I also understand why he didn't quite catch on. The thing with a lot of action movies -- particularly in the '80s and '90s -- is that they were only as good as their lead actor. The stars were the auteurs of their respective films, so whereas today there are action directors with distinct styles and voices (Gareth Edwards, Isaac Florentine, John Hyams), back in '91 it was more about what we could expect from each star. Steven Seagal made a specific kind of movie (still does), while Schwarzenegger made a different kind of movie. On this level, Jeff Speakman comes up short as an action lead, maybe because he only got one real shot at mainstream success and maybe because he just doesn't have much to offer beyond his physical abilities. There's no persona behind the moves. He's a fighting style, nothing more. 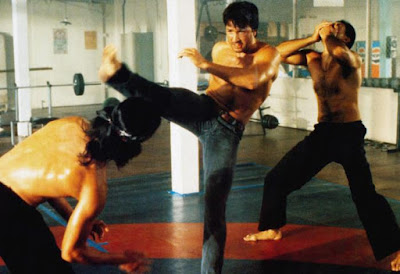 There's a fairly common characterization of action movies as being intensely homoerotic -- that at their core they're about repressed men who fight because they can't fuck. It's there in the shower scene of Tango & Cash or in every exchange between Arnold Schwarzenegger and the leather-clad, Freddie Mercury-moustache-having Vernon Wells in Commando (they might as well just kiss). In that tradition, there are some scenes in The Perfect Weapon that can be read as kind of...gay. Maybe it's just because Speakman is such a pretty boy, with his perfectly manicured George Michael stubble and his perpetually oiled upper body, but it's impossible to watch the scene in which he fights three guys and not read it as homoerotic, especially when the characters are making promises to each other like "Full contact. No protection." The fact that there is basically only one female in the entire movie and she's never allowed to speak further contributes to this phenomenon. There's no room for ladies in this world.

Also like a lot of action movies of the time, The Perfect Weapon is dependent on the main character entering into another culture as a visitor and then being better than that culture. Seagal took on the Jamaicans in Marked for Death; Brandon Lee went up agains the Chinese in Rapid Fire, as did Van Damme (both Van Dammes) in Double Impact. I suspect a lot of the main characters in American action movies were so immersed in Asian culture as a way of giving the stars legitimacy -- if they had the Asian stamp of approval, they must really know their stuff. So this is a movie very much of its time, utilizing a bunch of Asian character actors that would pop up in a number of action movies of the '80s and '90s, including Mako, Professor Toru Tanaka, James Hong and Cary-Hiroyuki Tagawa (of Showdown in Little Tokyo and Mortal Kombat fame). It's too bad there wasn't a part for Al Leong somewhere. 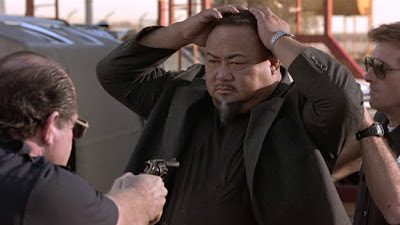 The Perfect Weapon was the only widely release movie Jeff Speakman ever made. He followed it up with 1993's Street Knight, which was the final film ever released by my beloved Cannon Films, but since then has worked exclusively in the DTV market. It makes the film feel like a one-off -- an action movie forgotten by all but the most devoted fans of the genre. In that way, it's kind of special.

Word has it that Speakman was diagnosed with throat cancer in 2013. Fuck that. He has since recovered, I assume by doing some Kenpo on that shit. He's not going to let illness take him down.