Coming out of Jurassic World, I’ve got dinosaurs on the brain. Considering the records the movie broke, so do you. In true exploitation fashion, I’ve put together this list of some notable movies outside of the Jurassic Park series that all have one thing in common: dinosaurs!

This movie stars William Katt and Sean Young and sticks to familiar tropes, like the evil science guy trying to wipe out a newly-discovered herd of brontosauruses. I haven’t seen this one in years and years, but I remember the tiny bronto-baby being adorable when I was a kid and really wanting it to be okay. The animatronic special effects seemed pretty good in a world before CGI, but it’s possible I’m being overly kind to it because it’s been about 25 years since I’ve seen it. I’m afraid to revisit it, because I’m almost positive that I’ll be disappointed.

Carnosaur was produced by Roger Corman, and I have to imagine that it was intended to cash in on the impending release of Jurassic Park, which it managed to beat in release by a month. Like JP, it’s also based on a book, so I think the intention of riding on the coattails of greatness is pretty clear. The movie tells the story of an evil science guy (see, they’re everywhere) trying to bring dinosaurs back and destroy stuff. Even worse, he’s figured out a way for women to conceive and carry baby dinos in their womb and give birth to them, even though it kills the women. It was made on a really low budget and utilized puppets, miniatures, and a guy in a suit, but I think it all kind of works. I first caught the film on video during the dinosaur craze that followed Jurassic Park, and it was satisfying enough in a low budget, Leprechaun kind of way. In the subgenre of women having dinosaur babies and those dinosaur babies then growing up and eating people, this is the one to watch. There two sequels to Carnosaur, but I’ve only seen the original. Hmmmm...maybe I should work one of the sequels into a Free Space day! 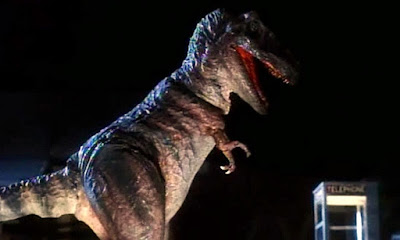 This film from Walt Disney Feature Animation was a noble experiment that I don’t think was as successful as it could or should have been. The idea to film real locations and then to use CGI animation on top of that footage to tell a sweeping story is a great one, but ultimately I just don’t connect with the movie. The film has a much more realistic style and tone than traditional Disney fare, and it’s not what I want from a Disney film. That being said, the story is emotional and grand in scope, and the animation itself represents a real technical achievement, which I think deserves a nod. Dinosaur has always felt a little ambiguous; even Disney didn’t quite seem sure how to classify the film in the months and years after it was released. It took eight years for the House of Mouse to actually include the movie in their canonical list of Walt Disney Animated Classics. I wish they hadn’t.

This is kind of a sentimental pick for me because I’m amazed at what filmmakers are able to do, even so early in the history of cinema. Based on the classic novel by Sherlock’s creator, Arthur Conan Doyle, this movie was released in 1925, before sound even accompanied the motion pictures. Amazingly, they’d already crafted stop-motion animation and brought captivating dinosaurs to delighted movie audiences. That spirit and tenacity is what makes movies so magical in the first place, and it also never ceases to inspire me. It’s really films like this one that brought movie attendance from 50 million per week in 1920 to 90 million in 1929. What I wouldn’t give to be a part of the water cooler conversation after this movie opened. 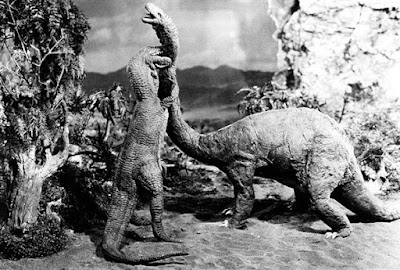 This entry covers both the 1933 film and the 2005 Peter Jackson remake, because both feature notable appearances by dinosaurs. I’m partial to the original for the same reasons that I mentioned above for The Lost World, but Universal definitely updated the ape/dino fight for modern audiences in the remake. I’ll tell you a secret: I hardly ever watch either of the King Kong movies, because they just break my heart.

Part one of a Ray Harryhausen double feature, The Beast from 20,000 Fathoms introduced the world to a completely made up dino, Rhedosaurus. The creature has been frozen in ice when it’s awoken by an atomic blast, eventually wreaking havoc on a major metropolitan area (New York City). Sound familiar? This movie and Harryhausen’s work spawned a whole slew of giant monster movies, including the Godzilla series, which took things in a whole other direction…but more on that in a bit.

This is part two of our Harryhausen double feature. Thirteen years after The Beast from 20,000 Fathoms, Harryhausen returns to dinosaurs in a big way and basically recreated many of the same dino battles seen in The Lost World back in 1925. One Million Years B.C. ups the ante by filming in color and adding Raquel Welch in a fur bikini. Also, Hammer Films! Some people are kind of cool on this movie, but I think there’s a lot to love. After this movie, Harryhausen went to work on The Valley of Gwangi, another dino picture that falls into the weird western genre. You should know all about if you read last week’s HHO. 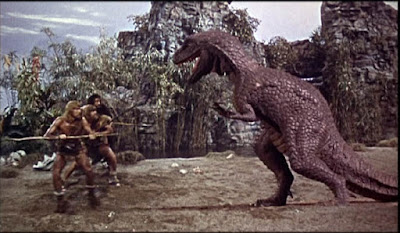 Gertie is the creation of animation pioneer Winsor McCay, and goes all the way back to the vaudeville days when McCay would show his short cartoons to assembled audiences as part of his act. Gertie the Dinosaur is the first cartoon to feature a dinosaur and the first example of character animation, and McCay’s creation was a huge inspiration to many of the people who took animation to the next level, such as The Fleischer Brothers, Otto Messmer, and Walt Disney. In fact, at Disney’s Hollywood Studios theme park in Orlando, there’s a 20-foot-tall representation of Gertie sitting in Echo Lake, giving a nod to the importance of the role that the character played in the history of animation and motion pictures.

Rex from the Toy Story films

No list about movie dinosaurs would be complete without tipping its hat to Rex, the lovable toy Tyrannosaurus Rex from Toy Story, voiced by Wallace Shawn. Oh sure, I love Woody and Buzz, because they’re our protagonists and are voiced by the big actors, but it would be INCONCEIVABLE (sorry) not to love Rex’s insecurity and endearing neurosis. The juxtaposition of a huge dinosaur toy having a crippling inferiority complex wins me over every time.

Mark the occasion, because there won’t be many times you’ll hear me say this: sorry Disney, here’s how you do it. Combining the animation talent of Don Bluth with the production of Steven Spielberg and my boy George Lucas, as well as the distribution power of Universal, The Land Before Time manages to be a near-perfect animated film. Because Don Bluth spent years as a part of the Disney animation system, he knew what made those classic movies work so well and he brought that understanding to his own projects at a time when Disney was lost in the wilderness. The dinosaurs in this movie are individual and clearly defined, have infectious personalities, and are cute enough that the viewer cares what happens to them. It was released on the same day as Disney’s Oliver and Company, and at the end of the weekend when the dust had settled, The Land Before Time stood triumphant with almost double the box office earnings of its competition. If you weren’t there in 1988, I can’t stress how big this movie was. There were Burger King Kid’s Meals, puppets at Pizza Hut, books, video games, and somehow THIRTEEN direct-to-video sequels (a fourteenth is currently in production). I’ve honestly seen none of them; the original made a big enough impression on me and will always have a special place in my heart. Full disclosure: a lot of times it’s only through writing about something that you discover how you really feel about it. I knew I liked The Land Before Time, but writing about it here has brought out how deep my affection for it runs. It’s a surprise, but a welcome one. 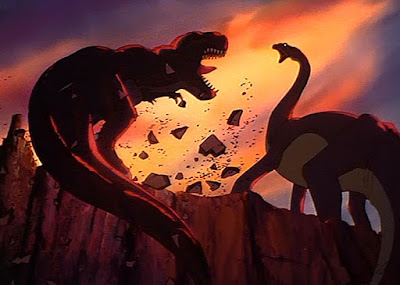 I guess Godzilla is not technically a dinosaur, but I think he’s close enough to make this list. I’ve developed a love/hate relationship with the big guy, thanks to cramming every single Godzilla movie into my summer last year. You can read about my experience here, here, and here, and then you can say a silent little prayer for me because I still haven’t been able to figure out exactly how I feel about Japan’s most famous icon. I’m pretty sure I love him, but I’m also pretty sure he doesn’t need three dozen films. Still, he looks like a dinosaur, he screams like a dinosaur, and he tears up big cities like a dinosaur, so he’s on this list. In the years since dinosaur pictures have thinned in our culture, Godzilla has been stalwart, and remains king of the monsters. Not just in volume (he screams really loud, see), but in legacy.

Got a dino movie you want to talk about? Shout it out in the comments!
Posted by Patrick Bromley at 5:00 AM