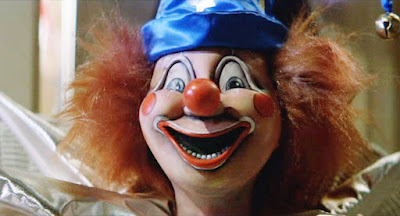 Clowns. A typical form of entertainment at many young children's birthday parties. Alternatively to some they are recurring nightmare, an alien race, an ancient demon, or the epitome of all evil?

Klowns. Is it because they hide behind a disguise and their features are barely indistinguishable? Perhaps... But everyone loves Iron Man don't they? Is it because they are able to create those weird little animal balloon figures with a puff of air and a twist of the wrist? I personally have a hate-on for balloons, so that in and of itself is horrific.

I had initially planned on saving this topic for Scary Movie Month, but at every turn I was confronted with yet another Clown movie so I allowed my clown fate to naturally occur and went with it. I spoke with quite a few people about my topic this week, and the general consensus was this: Adults are no fans of clowns. They're creepy, scary and quite obviously up to no good. Making all the happy kiddies laugh and cheer is just a precursor for luring them back into their clown-mobile to take them back to their Happy Farm of cotton candy, balloons and death for all. (I totally had to reign that in; I have watched WAY too many horror movies the past couple of weeks and my imagination just about sent me on a beat by beat breakdown of the envisioned horrors of Happy Farm.) 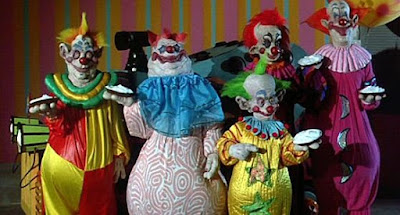 What if many of us unknowingly watched Killer Klowns From Outer Space (1988) as children and the core evilness of the creatures has stuck with us over the years? HAHA! That movie is actually first on my list of evil clown flicks, as it was my first choice for Sci-Fi day in Junesploitation. And holy hell did it not disappoint. An alien ship lands on earth and the creatures that emerge and begin their rampage of death and destruction on the human race look just like (you guessed it) Clowns! Hooray! There are just so many dumb gags you can play with a clown horror flick and this one has them all! They have a tracking hound (in the shape of a balloon dog), the klowns charm audiences with their magical abilities to create shadow critters with their hands before death and destruction obliterates the stupid humans, and what am I missing... Oh yes, Cotton Candy Cocoons! (Realistically, how else would you preserve a body for later consumption?)

So yes, clowns, (KLOWNS) are killer aliens with a taste for human blood. Best sucked through a crazy straw! 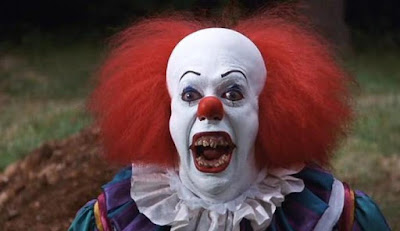 My first experience with a killer clown was when I first read Stephen King's IT. I believe I would have been about 13 and it clearly helped to turn me into the horror loving gal I am now. (I am a lover of all things movies, but there's just something irreplaceable about using your own imagination to create the world you are envisioning as you read a great story. ...I really need to read more. Perhaps next year I could aim for a couple books a week throughout the year instead of watching my crazy amount of movies!... Or maybe not. Movies will win every time!) Back to IT. When I was 16, I watched the movie (released in 1990), or television mini series if we are being correct, for the first time and it terrified me. For the next ten years, IT was one of my top five go-to movies for when I wanted to watch something scary. Re-watching it now I am amazed at how much I still love it; it is one of my all-time favourite Tim Curry performances. While it currently appears that production of the proposed remake of IT has been put on hold due to the departure of the director (Cary Fukunaga) from the project, I continue to hold out hope that one day we might get a re-telling of the story....although no one will ever be able to fill Pennywise's shoes the way that Tim Curry did.

So perhaps clowns are, in fact, a malevolent shapeshifting entity. 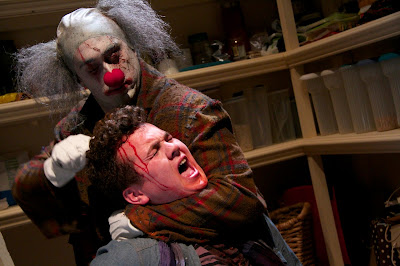 We seem to have had an abundance of clown related horror movies being released lately. While I'm not entirely sure of how I feel about that, I did watch 2012's Stitches and found a fair bit to laugh at, specifically all the stupid clown related killing gags. Its premise is that if a clown were to die mid-show, he will never truly be at peace until he has completed his act. Presto bang-o, we have Stitches the Clown (Ross Noble), brought back to life six years after his death to wreak vengeance on all who participated in the prank that brought about his gory end.

Clowns are the product of a black magic clown cult! 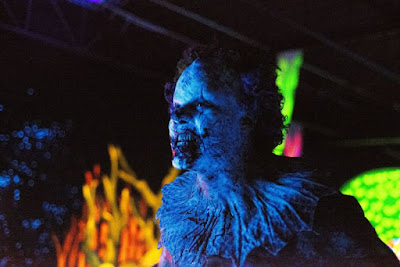 And to cap off the topic (for now), I watched the most recent release on the horror clown genre I could find, 2014's Clown. If you were rummaging through your attic and found an old clown costume would you put it on? What if I were to tell you there was a 75% chance that it's not a costume at all, but demon skin and if you put it on you can never take it off? Life as a demon clown might now be so bad... Unless you are opposed to killing and eating children of course.

You know, I think when I finally get around to making my own short horror movie (I have been talking about it for years, just need to get off my butt and start playing around with it already!), I will feature it around clowns. So happy and jolly?? BAH! They're Delightfully Horrific (to the tune of Lucky Charm's "They're Magically Delicious").

In summation, clowns are malevolent shapeshifting vengeful alien demons that leave their skin just laying around to sucker the next poor soul into a life of gorging on children.

Think you fit the part of what I am looking for in a clown? Auditions for my movie will take place sometime next year. Bring cotton candy and balloons!