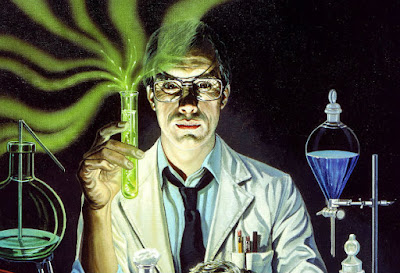 Chicago's own Master of Horror has never made a movie I don't like.

Stuart Gordon is the best. A former stage director turned horror filmmaker (and eventually sci-fi and thriller), Gordon's movies all share a willingness to be outrageous and a fascination with the combination of violence and sexuality. He has a pitch black sense of humor and is incapable of directing a movie that isn't smart and jammed with subtext to unpack (except maybe Robot Jox; I'm pretty sure what you see is what you get with Robot Jox [and perhaps Space Truckers, not included on this list], not that I'm complaining). His films hold up and continue to reward even after decades in release and countless re-watches. Here are 10 of his essential works.

1. Re-Animator (1985) Gordon's first movie was originally conceived as a cinematic showcase for the Organic Theater Company, the company he founded with his wife Carolyn Purdy-Gordon and for whom he had been directing stage productions since 1969. Though the production relocated to Hollywood and used actors not associated with Organic, Gordon utilized a number of the tricks he developed on stage to pull off sequences in the film. While the movie never feels small or closed-off, it does have the feel of a theater production (not in a bad way) from its ensemble cast to its set pieces; there's a reason it has gone on to become a successful musical, directed by Gordon no less.

While Gordon has made a ton of good movies, Re-Animator remains his true masterpiece -- bloody, funny, brilliantly acted and totally original. It announced the arrival of a great new talent and remains one of the very best horror films of the 1980s...probably ever (it's in the top 50 at least). Along with Evil Dead 2, this is the movie that helped invent the "splatstick" subgenre of ultra-gory horror comedies in which the gore gags are exactly that: gags. So many of Gordon's obsessions surface here, including a love of H.P. Lovecraft (who wrote the short story on which the film is based), the mixture of sex and death -- never more literal than it is here -- and a willingness to push the limits of what can be shown on screen. This is the movie that helped launch the careers of Jeffrey Combs (with whom Gordon would work many, many more times) and Barbara Crampton, who had previously had some minor roles (Body Double!) but who became a genuine genre icon beginning with this one. Show me a horror fan who doesn't love Re-Animator and I'll show you someone who might not really be a fan of horror. 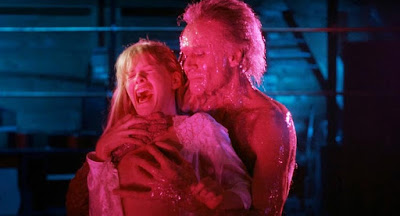 2. From Beyond (1986) Gordon's second (technically third) movie is basically a Re-Animator re-union, bringing back Gordon, stars Barbara Crampton and Jeffrey Combs, screenwriter Dennis Paoli and producer Brian Yuzna to once again adapt a story by H.P. Lovecraft. The results are even crazier and less commercial. Crampton and Combs switch roles -- she's the mad scientist and he's the damsel in distress -- in a movie that pushes the kinky sexuality of Re-Animator well past its breaking point. It's a gooier, grosser movie, one with fewer showcase moments but a much more pervasive "ick" factor through the whole thing. This is for more advanced students of Gordon's work, but those who fall into that camp are well rewarded by this weird, witty, twisted bit of slime-covered madness.

3. Dolls (1987) Shot before From Beyond but released after, Dolls represents a real departure for Gordon from his his other two films released at this point. It's clear that he is trying to do something different here, getting away from the over-the-top gore and sexuality of Re-Animator and From Beyond and replacing it with something gentler and more Gothic -- this is Stuart Gordon approximating old Grimm's fairy tales. That it's as violent as it ended up being is a result of studio interference from Charles Band (whose Empire Pictures distributed most of Gordon's early work). His dark sense of humor is still intact, as is his interest in developing strong characters within the context of a horror movie -- something for which a number of genre filmmakers have little patience. Though he would continue working in horror and sci-fi for most of his career, Dolls helped to keep Gordon from becoming pigeonholed early on even within those genres. He would not just be the gore guy or the Lovecraft guy. He's a great filmmaker, capable of doing almost anything.

4. Robot Jox (1990) Gordon's fourth and final film for Charles Band's Empire Pictures is another departure for the director: a big, splashy comic book of a movie about a future in which global conflicts are decided via giant robot battles. Shot in 1987 but held until 1990 because of Empire's collapse, Gordon himself has claimed he kind of messed up the finished film -- that screenwriter Joe Haldeman wrote an adult movie that kids can enjoy but Gordon directed it as a kids' movie that adults can enjoy. I love the weird mix that meets in the middle. Dave Allen's stop motion effects are terrific fun and Gordon approaches the movie with the same glee with which he approaches all of his projects. Say what you want about Stuart Gordon, the guy never gives less than 100%. 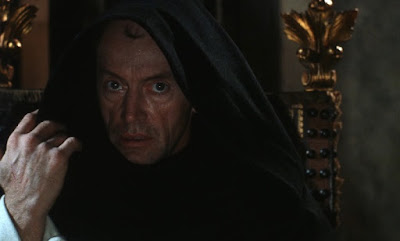 5. The Pit and the Pendulum (1991) One of Gordon's most underrated films is one of the best Full Moon productions (actually, both of his Full Moon movies are among the best in the company's catalogue). His first cinematic adaptation of Edgar Allen Poe finds Lance Henriksen at his most intense and offers some of the best art direction of a Full Moon film -- it's ambitious and feels expensive even when, compared to Hollywood movies of the period, it isn't. More dramatic than Gordon's usual work, The Pit and the Pendulum is further evidence of the director's enormous range. Yes, he made almost entirely genre films, but within the framework of horror and science fiction made all kinds of movies. This one more than probably any others is explicitly about the connection between sex and violence, as it's all about a character who beats and tortures people because he can't come to terms with his own desires.

6. Fortress (1992)  Gordon's first and only movie for '90s genre outlet Dimension is part science fiction, part action, part horror and all crazy. It's not really a movie of ideas, but rather a movie of visceral entertainment: Christopher Lambert plays a man who is locked away in a high tech prison because he and his wife are expecting a second child and the law permits only one. The stuff in the prison (which makes up the majority of the movie) is insane and incredibly bloody -- the prisoners are all implanted with devices that make their stomachs explode if they disobey -- but filled with a cast of Stuart Gordon regulars and familiar genre faces, including Vernon Wells, Jeffrey Combs, Kurtwood Smith, Clifton Collins Jr. and Tom Towles. The movie is pretty dopey, but in a broad, violent, often cartoonish way. It's very much of the early '90s when genre movies were in a pretty bad place, but there's a lot to enjoy for fans of this kind of thing. As is his way, Gordon doubles down on the more extreme elements and makes a film that really relishes in over the top violence and big, splashy action.

7. Castle Freak (1995) Gordon's second movie for Full Moon does away with the over the top comedy and outlandishness of his earlier efforts and is more in line with his Pit and the Pendulum: a very dark, very intense horror film about the unraveling of a family and the sins of the past returning to wreak havoc on all of us. He once again teams Jeffrey Combs and Barbara Crampton for their most dramatic work to date, with both actors rising to the challenge and turning in intense, wounded performances. There is a good deal of grisly violence and Gordon's typical penchant for sex and violence, probably best represented by the scene in which the unshackled, hideously deformed monster kills a prostitute and eats her boob. StuGo gotta StuGo. 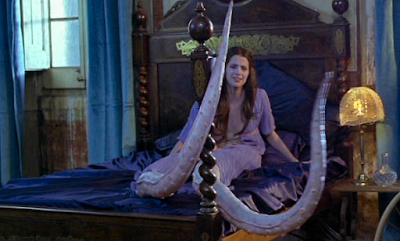 8. Dagon (2001) Gordon returned to Lovecraft for what might be the most Lovecraftian of all the Lovecraft adaptations. Reteaming with producer Brian Yuzna and screenwriter Dennis Paoli (who wrote Re-Animator, From Beyond and Dolls), Gordon's movie separates the hardcore Lovecraft fans from the casual ones -- its for only the most advanced students, and in its way achieves a kind of lunatic purity. The effects aren't as good as in his best work and the acting is considerably more uneven, but these are problems resulting from Gordon's available resources and ambition, not his  talents as a filmmaker. There is a large subset of Stuart Gordon fans who consider this his best film.

9. King of the Ants (2003) After Dagon, Gordon moved away from horror for much of the 2000s, drifting towards crime dramas like this one and his next film, the 2005 character study Edmond. King of the Ants is a nasty, violent little thriller about a guy (Chris McKenna) who is double crossed and left for dead but comes back to settle the score. It may lack originality in its premise, but Gordon is such a good genre director and his movie so bleak and nihilistic that it stands apart even among the crowded genre of revenge movies. Bonus trivia! This was the first movie ever distributed by The Asylum. See? They weren't always the worst. 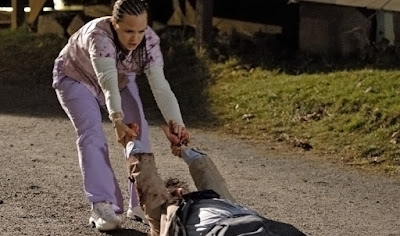 10. Stuck (2007) Gordon's last theatrical film -- yes, the marketplace is so fucked up that Stuart Gordon hasn't directed a feature in eight years -- is the third (and final?) entry in his crime thriller trilogy. Mena Suvari plays a nurse who hits a man (Stephen Rea) with her car; his head gets stuck through the windshield of her car and she, not knowing what to do, leaves him there in her garage for several days. This is pitch black comedy (based on a true story) that is small and intimate and well acted by its ensemble. Gordon approaches the material in no-frills fashion but still stages a couple of incredible, grisly sequences, the best/nastiest of which involves a windshield wiper. I feel like this went under the radar of too many people, including horror fans. It's terrific.

Bonus: Masters of Horror: The Black Cat (2007) While not technically a feature, Stuart Gordon's contribution to Season Two of Showtime's Masters of Horror deserves special recognition for being both a great tribute to Edgar Allen Poe and a great hour of television. Jeffrey Combs is brilliant as Poe in a story (co-written by Gordon and Dennis Paoli, so no wonder it kicks ass) that combines biography with an adaptation of the Poe story of the same name. This isn't just the best episode of Masters of Horror for that season, but quite possibly for the show's entire (tragically brief) run. 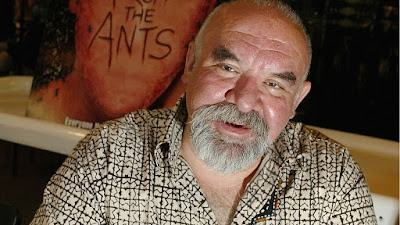