Review: The Death of Superman Lives: What Happened? 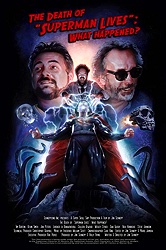 I hope this review doesn’t seem like I’m picking on director Jon Schnepp.

Schnepp’s new documentary, The Death of “Superman Lives”: What Happened?, chronicles the pre-production of a movie that never came to fruition – 1998’s Superman Lives, a feature film that would have been directed by Tim Burton, written by Kevin Smith (among others) and starred Nicolas Cage as the Man of Steel. The material is there for an interesting documentary; just look at last year’s excellent Jodorowsky’s Dune for an example. But The Death of “Superman Lives”: What Happened? is nowhere near as good as that movie. It’s entertaining at times but could have been much more.

The movie consists mainly of talking heads describing what it was like in the pre-production stages of Superman Lives, including concept art, storyboarding, the various drafts of the script and the costume design. There are also animation sequences peppered into the proceedings to liven up the visual style. It sort of works. As for the talking heads, some of them are great. Always an engaging public speaker, Kevin Smith nearly steals the movie, which is a problem because his contributions are mostly limited to the first third of the movie since his draft of the script was the first written and the first thrown out. His absence is felt in the latter two-thirds of the documentary. 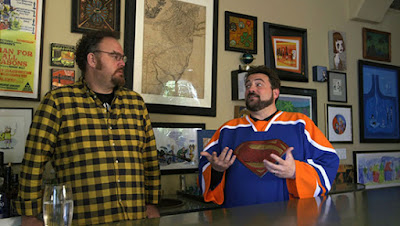 Also very engaging is producer Jon Peters, who was also the producer on Burton’s 1989 Batman. Peters is a great personality, the prototypical Hollywood producer, and some of his ideas (which he doesn’t shy away from) are hilarious and bizarre and I wouldn’t dare spoil them. His involvement is the best thing that The Death of “Superman Lives”: What Happened? has going for it. He’s a great villain to the piece, but also sort of an anti-hero since his heart seems to be in the right place. Among the other interviewees are Tim Burton, who is sort of dull and looks like he’s 100 years old. My favorite comment about Burton’s involvement in Superman Lives is that he saw the movie as a challenge to change up his career with something lighter; however, all the evidence of the pre-production work seems to indicate that vision would not have been realized if he made Superman Lives – it would have been the same old wacky shit.

I also enjoyed screenwriter Dan Gilroy’s (Nightcrawler, The Bourne Legacy) piece because for some reason he’s shouting the entire time as if he cannot modulate the volume of his voice. It’s inadvertently funny. Missing, though, is Nicolas Cage, whose interview would have been so clutch here but it’s nowhere to be found. What insight we have into Cage’s feelings about the production are all gained from archival footage. It would have been great to have his input now that it’s in hindsight. The rest of the interviews (mostly from production people) are kind of meh. They’re not storytellers in the verbal sense and the energy lags during this long portion in the middle of the documentary. 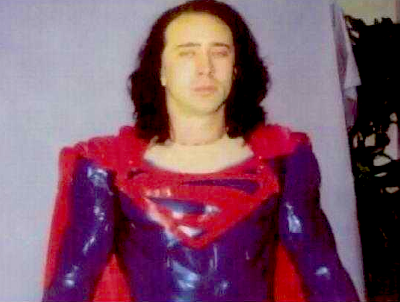 I wish Schnepp focused less on the production design, costuming and concept art and more on the creative process of writing the movie, casting and the financial realities at Warner Bros. that led to the project’s demise. That’s what I’m interested in, but they’re really only covering that in the first 30 minutes and the last 15 minutes. The rest is like a behind-the-scenes featurette for a movie that didn’t get made. The doc would be better if it explored the film industry and the studio model, dissecting the fiscal realities of how the movie demised. You never get a sense of what Superman Lives could have been, unlike in Jodorowksy’s Dune which basically allowed you to visualize the entire movie. I wanted to get more of a sense of what a missed opportunity not having Superman Lives is for pop culture, but the movie only minimally explores that.

So here’s the part where I pick on Jon Schnepp. I’m sorry in advance, Mr. Schnepp. He puts himself in front of the camera way too much like he thinks he’s Michael Moore or something. This is a problem because he never justifies any reason for him to be in front of the camera, so it comes across as vanity. I appreciate how much detail and effort he put into the project but all of that is undermined because he looks like a fanboy, interviewing people while wearing character t-shirts and grinning at his good fortune that he’s in the same room with the likes of Smith or Burton. He never pushes them and I wish he did – from behind the camera. 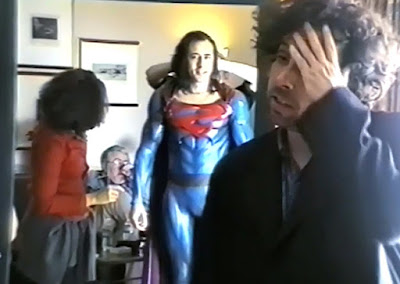 In short, while not without its light charms, The Death of “Superman Lives”: What Happened? is a slight, amateurish documentary that pales in comparison to the similarly-themed Jodorowsky’s Dune. You’ll get some interesting tidbits here but Schnepp is not quite there as a filmmaker (for no apparent reason he includes footage of Peters taking a phone call during the interview while Schnepp drinks a bottle of water) and his pedestrian style makes this whole thing feel like a sloppy enterprise. I’ll give the movie this much – from the evidence I see here (based of the artwork mostly), I really wish they would have made Superman Lives. It would have been crazy in an interesting way.

How can you see this documentary? The movie is available on the filmmaker’s website for a $14.99 purchase. I would recommend renting it instead, but since that is not an option (boo!) you’re pretty much stuck with buying it if you have any interest in seeing this movie. I don’t think it’s worth it, but that’s just me.