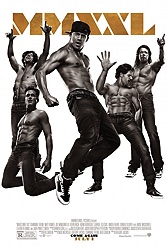 Magic Mike XXL is what you thought the first Magic Mike would be. That's not such a bad thing.

When Magic Mike was released in 2012, it took a lot of us by surprise -- and not just because it became a massive sleeper hit, grossing $170 million against a $7M budget. It surprised us because it was advertised as a big naked stripper party but ended up being secretly really good. It was a '70s-style character piece about What Happens When the Party Stops, directed with real intelligence and beauty by Steven Soderbergh and launching Channing Tatum (on whose life the movie was loosely based) to superstar status. It was one of my favorites of that year.

It's also the kind of movie that absolutely does not require a sequel, but because it made so much money we shouldn't have been shocked at all when Warner Bros. announced Magic Mike XXL, which would continue the adventures of Mike (Tatum) and his stripper friends. Because Steven Soderbergh is in self-imposed "retirement," he has not returned to direct. This had me concerned about the prospects for the sequel, as it was really Soderbergh who was responsible for shaping the original film into something unexpectedly deep and sad while still being insanely entertaining. Directing duties for XXL fall to Gregory Jacobs, Soderbergh's former AD and director of Criminal (2004) and Wind Chill (2007), two movies that were good without quite being great. Soderbergh is still on hand as the cinematographer (as Peter Andrews) and editor (as Mary Ann Bernard), so the film still looks and feels a lot like a Soderbergh movie. Nothing wrong with that. 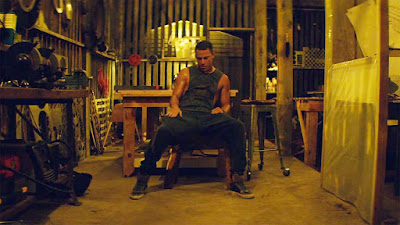 XXL picks up three years after Magic Mike. Mike is now single and struggling to keep his custom furniture business going; he has only one employee for whom he can't afford to buy health care. He gets a call one day from Tarzan (wrestler Kevin Nash) telling him that Dallas (Matthew McConaughey in the first film) is gone, so Mike reunites with the Kings of Miami thinking he's attending a funeral. Instead, he finds out, Dallas has turned his back on the gang and taken The Kid to strip in Europe. The boys -- including Big Dick Richie (Joe Manganiello), Ken (Matt Bomer) and Tito (Adam Rodriguez) -- are heading to Myrtle Beach to attend the annual stripper convention one final time and want Mike to join them on their "Last Ride." He does. Naked male antics ensue.

Magic Mike XXL is surprising in many of the same ways that its predecessor managed to be; whereas the first movie had no right being as good as it was, XXL is a sequel that has no business existing in the first place but which manages to be a lot of fun. It loses all of the darkness and grittiness of the first movie and, in doing so, much of its depth and resonance. It replaces it with sweetness and tons of charm. Magic Mike looked at the grim realities of being a "male entertainer" and looked down on it -- it's a means to an end, a life from which the wise ones escape. In Magic Mike XXL, it's something to be proud of. These characters just want to bring happiness to people and show them a good time. They are spreading joy, one dance at a time. 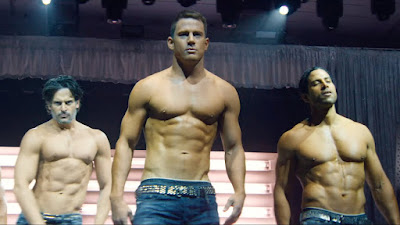 And there's a lot more dancing in this movie. Those who felt let down when the original Magic Mike wasn't a big naked strip party movie will be well served by XXL, as that's pretty much exactly what it is. There are group dances, individual dances, dances performed for just one person, dances performed for no one. In Magic Mike XXL, the guys aren't hustling -- they're dancing just to make women smile and feel special for the length of a song. They're not really even hitting on them; there is sex talk in the movie, but it never feels dirty or ugly. These guys want nothing in return -- not even money, it would seem. While Magic Mike was a movie very much concerned with the economic collapse of the 2000s and making ends meet (a common concern of Steven Soderbergh's work), XXL doesn't concern itself with such things. They are showered with dollar bills as they dance and are never shown picking up a single one. There is some discussion among the characters about what they plan to do after stripping and starting their own businesses, but it speaks more to the them of Doing What You Love, not what will make you rich.  The undercurrent here is about finding what you love and going for it; the characters even incorporate those things into their dancing, which serves the dual purpose of revealing stuff about them while ensuring that each new number is different.

My favorite dance in the movie comes from Joe Manganiello, who existed mostly in the fringes of the first film but here steals the show; he's really funny and has my favorite arc of the film, so devoted to making others feel special that he designs a strip tease modeled after a wedding day. As a way of helping him build confidence (if the handsome, chiseled, tall and, we're told in the movie, incredibly well-endowed Manganiello lacks confidence the rest of us should go ahead and drink all of the bleach) and make him understand his talents, the boys dare Richie to go into a convenience store and make the bored cashier smile. That's it. Manganiello's dance to "I Want It That Way" is a thing of beauty, charming and funny and I'm sure sexy to many (especially anyone who likes Cheetos). The sequence, like Manganiello's performance and really the entirety of Magic Mike XXL doesn't take itself too seriously. It just wants to make us smile. That's it.
The entire ensemble is really strong, getting a lot more screen time this go around and making the most of it. Every character gets one on one time with Mike and every one of them approaches it differently. Sometimes it's a long conversation that's filled with history and hints of regret, like Tatum and Matt Bomer's scene on the beach (further proof that this is a sweet, good-hearted movie? Matt Bomer's character is way into New Age healing and mysticism and the film never mocks or judges him for it the way almost any other movie would). Sometimes it's just a couple of words exchanged, like a very short and touching scene between Tatum and Kevin Nash. These are happy, nice people inside of a happy, nice movie.

There are cameos galore as the boys encounter faces both new and familiar on their road trip, a few of which inspired eye rolling from myself and at least one of the friends with whom I saw the movie (who, to be fair, spent the rest of the film fanning herself and uttering things like "Mama like." This is the best possible way to see Magic Mike XXL). Jada Pinkett Smith shows up as the owner of some weird brothel/mansion/strip club -- I remain plagued by trying to figure out what this place is -- who has history with Mike. Donald Glover is a dancer who freestyle raps. Michael Strahan does a dance. Andie McDowell plays a drunken Southern divorcee whose party takes a turn for the better with the arrival of the Kings of Miami. Elizabeth Banks works at the stripper convention. Amber Heard plays a photographer named Zoe (because of COURSE her name is Zoe) who flirts with Mike but appears to have little patience for his stripper lifestyle. This is the weakest stuff in the movie, as it is nothing more than a retread of his scenes with Cody Horn in the first movie minus any of the charm or romantic tension. Brooke represented another life for Mike; Zoe represents another clichéd cinematic depiction of the "artist" girl. 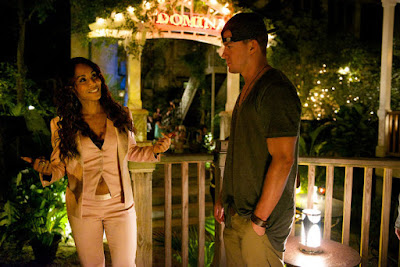 Magic Mike XXL feels slight in the moment. It's a road movie about trying to have a good time but not at the expense of others -- with its sun-soaked photography and a series of musical numbers, it might as well be a Beach Party movie updated for 2015. For all its lack of any conflict or antagonist, the movie still managed to stick with me  after the fact probably because of its endless positivity. In a summer movie climate in which we've spent the last few years watching cities leveled and thousands (if not millions) presumably die, here's a movie that just wants to put on a show for us and give us a good time. If that means getting our faces humped to Ginuwine's "Pony," well...there are worse ways to spend two hours.
Posted by Patrick Bromley at 5:00 AM