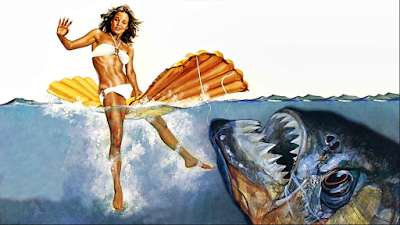 My years living down under weren't just spent chasing after wallaby, learning how to play the didgeridoo and deciphering Aussie slang. In fact I did some my best life learning below the equator! Some of which is directly related to the theme of this piece.

Imagine for a moment it's midnight, you are lying in bed and allowing your mind to wander about the extreme sport that you will be doing bright and early the following day. You are getting set up, have strapped on your waist harness, attached the lines to the 18 foot kite, have bar in hand and feet in board. Imagine further and you are splashing about in the water wearing a wetsuit and looking every bit the perfect SEAL MEAL for the ocean's largest predator.

Have I watched too many docs and movies about sharks? Perhaps. Was I living in the country whose ocean surrounds are known for being chock full of sharks? Most definitely. But I am of the opinion, that if I am swimming in the ocean and I get eaten by a shark, statistically speaking, it was my time to go. However, I am more likely to lose control of that damn kite and slam myself into any number of things before I get chewed on by a shark. But it was not my kitesurfing abilities (or lack thereof) that kept me up at night. 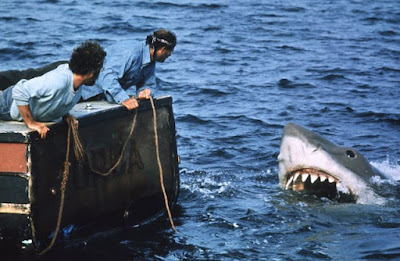 Bam. Swimming in the water, lakes, oceans and ponds is what summer is all about. And this week instead of going swimming, I opted for the safety of my basement and watching a summertime theme. Tooth-filled, bloody waters full of some form of death or another. First up and the leader of the pack, 1975's Steven Spielberg's original blockbuster JAWS. The film stars Roy Scheider as police chief Martin Brody, Richard Dreyfuss as oceanographer Matt Hooper, Robert Shaw as shark hunter Quint and the superstar at the centre, a Great White shark that has claimed the waters around the town of Amity as his feeding grounds. Over the years I have had an inkling that Richard Dreyfuss was one of my favourite actors, but on this re-watch I am more than convinced that he is. What more can really be said about this perfect film than has been said already? In my opinion it is sheer perfection, especially for turning 40 this year. 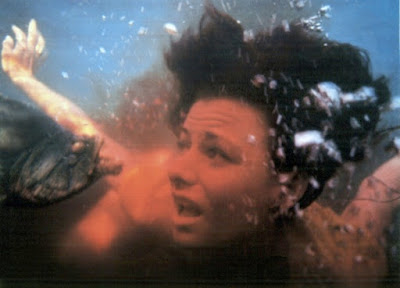 Next up, I followed in the path with the original JAWS parody, 1978's Piranha. The directorial debut of Joe Dante (he co-directed Hollywood Blvd with Allan Arkush in 1976, but this was his first film that was not co-directed or was his 1968 project The Movie Orgy, a 7-hour long compilation film of B-movies and tv shows), the film stars Bradford Dillman, Heather Menzies and Kevin McCarthy. The military has genetically modified a new weapon, in the form of a mutant piranha, which inevitably winds up being introduced into a river and mayhem ensues. This was my first viewing and I did quite enjoy it, but my favourite part is most definitely the sound the piranhas made when they started attacking and chewing. 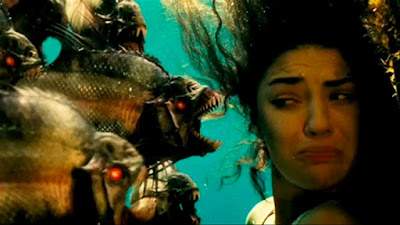 I'm not the biggest fan of sequels, so I skipped over all the Jaws and Piranhas that followed the originals and skipped ahead to a modern remake of Piranha, 2010's horror comedy Piranha 3D. I was not prepared for what I was about to watch as I went in blind and came out dazzled. Star dazzled that is, as if you have watched a movie, ever, then you would have seen one member of the ensemble cast in Piranha 3D: Elisabeth Shue, Jerry O'Connell, Ving Rhames, Christopher Lloyd, and my personal favourite cameo, Richard Dreyfuss. Side note: He (Dreyfuss) appears at the start of the movie and the song playing on his portable radio in his boat is “Show Me the Way to Go Home,” which was of course the song that he, Roy Scheider and Robert Shaw sang as they were out hunting the Great White. Bloodier, boobier and funnier is how I would best describe this remake and I think that it even elicited a couple guffaws out of me. Yep, I do that. I have mentioned to a few people that if they don't mind staring at slow-mo boobs bounce, barrels and barrels of blood (the boat propellor scalping scene stands out in my mind) and Jerry O'Connell screaming about his penis, then you should pop this on and give it a go. 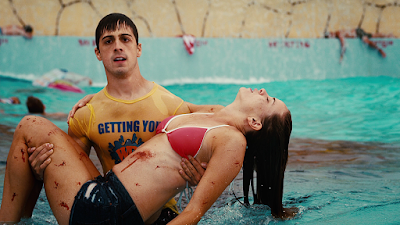 And finally (sigh), I went a step too far and watched Piranha 3DD. A sequel to the Piranha remake, I really don't have too much to say about it aside from these fish look more ferocious, there are more boobs, less blood and David Hassellhoff finally saves one person from drowning. And because getting your penis bitten off is so funny, it had to be included in this movie as well.

So really, what it all boils down to in the end is this: It's summertime! YAY! Swim at your own risk, because we never really know what lurks below the surface of the waters. And if you think that lakes and rivers are safe, then ask yourself how much do you trust your government? Everyone's worst nightmare is but an experiment, in a beaker, in a laboratory hidden away somewhere, just waiting to get flushed down the toilet so it can bite you when you least expect it.
Posted by Patrick Bromley at 12:00 PM