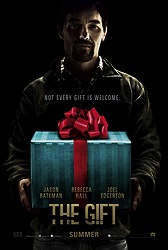 This one kicks all kinds of ass. See it as soon as possible.

I loved The Gift and that took me by surprise. The trailers looked generic and I just recently lamented the quality control of The Gift’s production company – Blumhouse – when I reviewed their recent movie The Gallows. To my complete and utter shock, The Gift is one of the best pure thrillers I’ve seen in recent years. The writing, the direction and the performances are all excellent. Everything feels grounded in The Gift and that goes a long way to maintaining the suspense of the experience. Whereas I was expecting another Fatal Attraction or Unlawful Entry based on the marketing – i.e. entertaining thrillers but also very heightened, stretching believability – The Gift is suspenseful, sneaky, surprising and more unsettling. This is the type of story that would work just as well as a play. Its smallness is an asset.

Luckily, The Gift also really works as a cinematic experience because writer-director-costar Joel Edgerton is in total control of his material, playing the audience effortlessly. He’s The Gift’s MVP. The script is rich with themes like the power of ideas, the importance of our choices and our responsibility for our actions. The movie is all the more thrilling because it’s intellectually stimulating at the same time. The characters he’s written (specifically Jason Bateman’s Simon and Joel Edgerton’s Gordo) are terrific – complex and sympathetic and despicable all at once. The script displays a filmmaker who is very respectful of an audience’s intelligence. It’s an unsettling script that also somehow doesn’t sacrifice being fun at the same time. 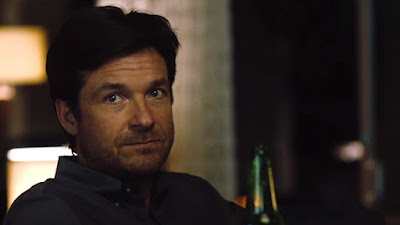 The direction and performance by Edgerton need to be lauded too. He directs in a moody and commercially inviting style (he’s made a handsome and slick-looking thriller) and I hope The Gift is a sleeper hit so that Edgerton gets more opportunities to write and direct. He has the makings (so far) of a great filmmaker and storyteller. His performance as Gordo is solid work, too. Edgerton is an actor I look forward to seeing in movies now (he livened up Warrior and The Great Gatsby, for example) as he always brings a lot of confidence and interesting choices to his work. In The Gift, I’ll remember his dead shark eyes and that weird helicopter sound he made. Both give me the chills.

I loved how the movie also played with the screen persona of Jason Bateman– specifically his everyman-ness. Coming off of strong dramatic work in Disconnect, Bateman takes it to a whole other level in The Gift and gives what I think is his best performance buoyed by a great character arc. Bateman is usually the best thing in bad movies and it’s such a joy to see him kick ass in a good one. The movie also stars Rebecca Hall as Bateman’s wife, and this is the one area of the movie I didn’t love. Through no fault of the performer, she often seemed like a pawn in a slugfest between two men and that was a little disappointing for me. It’s as if Edgerton didn’t have a grasp on how to write her as a more active participant in the proceedings. But that’s just a nitpick, because Hall gives the character all she can. 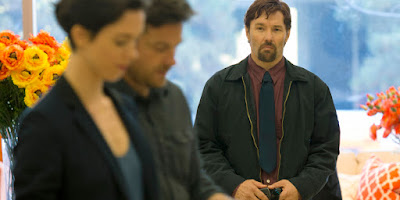 I alluded earlier that a major reason the movie works is because it’s intellectually creepy. I want to dive into that some more. The Gift is really a movie about morality and I’d go so far as to say it might actually have a positive influence on society because I think it might make people second guess how they behave with one another, making you reconsider the people in your life you may not have treated the most fairly. The Gift is a movie with something worthwhile on its mind and that’s really great in what seemed at the outset to be just the next disposable commercial entertainment from Blumhouse.

The Gift is one of my favorite movies of the year so far. I had a great time watching it. It reminded me of 2005’s Cache -- always a good thing, because that movie is just about perfect. I’m trying to avoid going into much detail in my review because I want to preserve The Gift as an experience for you. The less you know about it going into the movie, the better. I think this is a movie that will work on multiple viewings too (once the mysteries are revealed) based on the strength of the filmmaking and the performances. I get a real charge out of seeing something this good (especially when it comes along as a surprise) and I think most of you will like it as much as I did. Don’t let this one go unseen or underappreciated.
Posted by Patrick Bromley at 12:00 PM