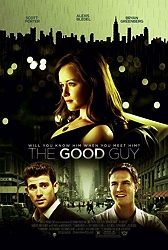 Adam Riske: The Good Guy (2010, dir. Julio DePietro) My movie/TV crush for Alexis Bledel knows no bounds, which brought me to this romantic-dramedy a few years ago. It's good! The Good Guy offers an interesting take on the social lives of a group of young professionals that I thought felt authentic. Plus, it's a love story where the "prize" is the affections of Alexis Bledel, yo. Outside of Post Grad we don't get too many of those. So strike while the iron is hot is what I'm saying. The movie also stars Bryan Greenberg, who was really good in the underrated romantic comedy Prime from about 10 years ago. Watch that one too if you like romance and stuff. 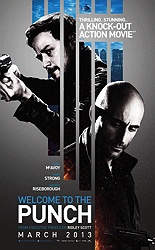 Adam Thas: Welcome to the Punch (2013, dir. Eran Creevy) Between this one and The Sweeny, I think I’m becoming quite a fan of British action movies. Much like some of the British action movies I’ve seen, I loved the gritty dark feeling that Welcome to the Punch puts out and the speed at which the plot develops. I get frustrated with a lot of more modern lower-budget action movies because they seem to spend too much time repeating plot points. Welcome to the Punch moves very quickly and simplifies things enough that we don’t get lost in the plot and can just enjoy some “Cops and Robbers” action. James McAvoy is great, making me remember how much I like him in action films and wish he’d do more of them. If you’re starving for an action movie, this is one of the better modern ones I’ve seen on Netflix. 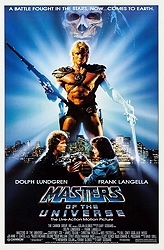 Heath Holland: Masters of the Universe (1987, dir. Gary Goddard) You might not know that I'm actually a HUGE He-Man and the Masters of the Universe fan. The cartoon series and toy line from the 1980s featured a Conan-like hero in an setting that throws both science and technology into an otherwise primitive and barbaric world. It also had some of the coolest and most imaginative villains this side of a Batman story. I still love the show for its adventure and morality, and I still watch it with my own kid. 1987 brought us the Hollywood version of the story with Gary Goddard's Masters of the Universe, a film that casts one of my other favorites, Dolph Lundgren (somehow looking even more jacked than he did in Rocky IV), to don the loincloth and fight the evil forces of Skeletor, played here by Frank Langella. Transport the action from far-away Eternia to our Earth, add Meg Foster and Courtney Cox in her second-ever film role, and you've got something that--like a lot of movies from this period--is both corny and extremely watchable at the same time. In a world where almost all film adaptations of cartoons and video games fall flat on their face, Masters of the Universe thankfully offers something a little different. If you've ever muttered "By the power of Grayskull," this one's for you. 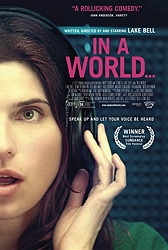 JB: In A World (2013, dir. Lake Bell) I remember really liking this the first time I saw it, and that affection has only continued to grow as I look back upon it. An independent comedy that largely avoids “indie twee,” In A World focuses on Carol Solomon (writer/director Lake Bell) and her quest to break into movie trailer voice-over narration, the field in which her father is king. Along the way this movie becomes a sly, romantic comedy with Demetri Martin doing standout (not stand-up, standout!) work as the romantic leading man. Comics Rob Corddry, Michaela Watkins, Ken Marino, Tig Notaro, and Nick Offerman are also featured. In A World aspires to be small, well observed, and entertaining, just the qualities we all might be craving in a movie this Labor Day Weekend. 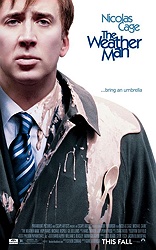 Patrick: The Weather Man (2005, dir. Gore Verbinski) What you should really stream this weekend is Turbo Kid on Amazon Prime Instant Video. But if we're sticking with Netflix -- and them's the rules -- how about this really strong comedy drama from 10 years ago? It features one of the last best performances from Nicolas Cage and makes a case that Gore Verbinski could be doing smaller, more idiosyncratic movies instead of Pirates sequels and The Lone Ranger. This one was widely ignored and/or disliked upon its release, failing to make back even its $22 million budget, probably because the marketing made it look like a movie about a goofy weatherman who gets food thrown at him. It deserves so much better. Bonus points for shooting Winter in Chicago.
Posted by Patrick Bromley at 12:00 PM

Email ThisBlogThis!Share to TwitterShare to FacebookShare to Pinterest
Labels: alexis bleed, gore verbinski, in a world, lake bell, master of the universe, netflix instant, netflix this movie, nicolas cage, the good guy, the weather man, welcome to the punch