11 More Killer POV Episodes You Should Listen To 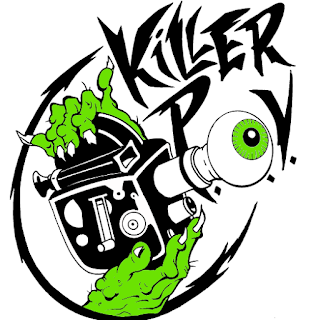 More from the best horror podcast on the internet!

Last #ScaryMovieMonth, I published a list of 11 episodes of Killer POV you should check out if you want to hear the best conversations about horror all year long. Many of you took the suggestion and have become fans of the show, which has been really gratifying -- it's nice to be able to turn other people on to something you love. After all, isn't that why we're here?

Hosted by Elric Kane (formerly of This Week in Horror and Inside Horror), Rob Galluzzo and Rebekah McKendry (formerly of FEARnet and Fangoria, respectively, and now both working for the recently-launched Blumhouse.com), Killer POV is a weekly horror podcast usually following the same format: the hosts discuss what they've seen recently (or what cool horror-themed events they've attended, making the rest of the world jealous) and then are joined by a guest for a discussion of that person's work and a larger them. More than anything else -- TV shows, other podcasts, whatever -- it is the entertainment I look forward to most every week. 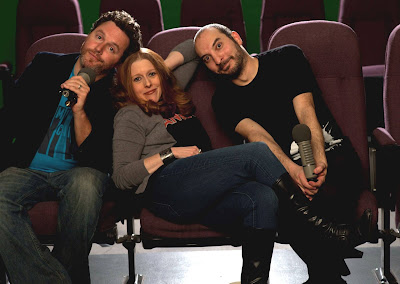 One of the things I love about Killer POV is that it doesn't just provide me movie recommendations -- though there are countless movies I've sought out after hearing them talked about on the show -- but has also helped the way I watch movies. While all three hosts have varying tastes, they're all good at taking a movie on its own intended terms and trying to find the good in things. They inspire me to try to be a better viewer.

Here are 11 more episodes you should check out if you're not already listening every week. These are only shows that have posted since I published my list last year, so they're limited to the last 12 months. Do I need to make the usual disclaimer that there have been more than 11 great episodes and that these were chosen for specific reasons but I am in no way snubbing the other 40 or so shows? Of course not. You're all too smart to suggest otherwise. Besides, I have listened to them all, some more than once, and have enjoyed every minute.

These are presented in no particular order. 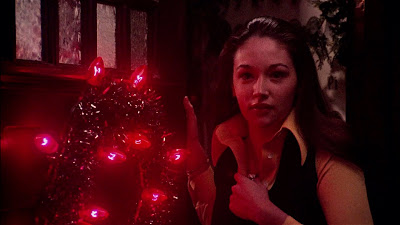 11. Episode 85: Holiday Horror! - One of the things I love about Killer POV is just how deeply they are able to dive into most topics, and that's precisely the case with this "holiday horror"-themed episode with guest co-host and friend of the show AJ Bowen, a devoted fan of and student of the subgenre. There's hardly a single holiday horror film that doesn't at least get name checked here, meaning attentive listeners like myself come away with dozens more titles we now need to track down and check out. Also, can you believe how many holiday horror movies there are? What's that about?

10. Episode 93: Beyond the Beyond with Bob Murawski What a great conversation this is. Charmingly shy Bob Murawski, an Oscar-winning editor and the owner of Grindhouse Releasing, gives an in-depth interview in which he covers everything from his days working with Sam Raimi (including some very interesting stories about the making of Army of Darkness), working with his wife as an editor on The Hurt Locker (for which they won the Academy Award) and particularly his efforts with Grindhouse. He has amazing stories to share about rescuing the long-thought-lost Duke Mitchell film Gone With the Pope and one mind-blowing revelation about a planned sequel to Lucio Fulci's The Beyond called Beyond the Beyond. Of course, now we all have to live with the knowledge of that missed opportunity, so maybe this episode is both a blessing and a curse.

9. Episode 116: Tribute to Wes Craven and Jumpcut Cafe - When you spend hours listening to people talk every week, you feel like you get to know them a little. While I never had the fortune of going to L.A.'s Jumpcut Cafe, the restaurant formerly owned and operated by Elric Kane, I was heartbroken to learn that it would be closing its doors -- even more so after hearing this episode, recorded in the wake of its closing and proving just what a special sanctuary it was for the horror community. In addition to fond remembrances of what Jumpcut meant to everyone (including guests Andrew Kasch, Nick Simon and Joe Maddrey), this episode also celebrates the life and career of the great Wes Craven, who passed away the same day that Jumpcut closed. There were dozens if not hundreds of Craven retrospectives after his death (including more than one on this very site), but none as heartfelt and comprehensive as this one. Guest Nick Simon worked with Craven on his feature The Girl in the Photograph and has warm and wonderful stories to share, but everyone's lives were clearly touched by Craven and the episode explores that. Killer POV isn't just a show that celebrates what we love about horror, but also what the genre means to us as human beings. 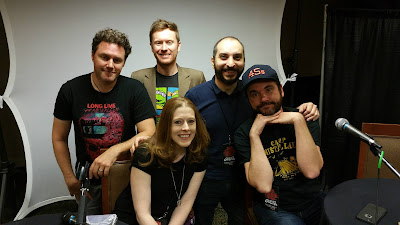 8. Episode 100: Live from Texas Frightmare - To celebrate their 100th episode, the KPOV hosts wanted to do something special so they recorded this episode live from the annual Texas Frightmare Weekend convention. What makes this episode so unique -- besides the addition of audience questions -- is that the hosts are joined by indie horror rockstar AJ Bowen as well as fan and fellow horror movie lover Aaron Dries, who sits in as co-host for the show and does a great job keeping up with them. It's so great that a show about fandom -- it's all about fans of horror being fans -- includes a fan as part of the episode. The next time they decide to have a listener sit in, though, I hope SOMEONE CALLS ME.

7. Episode 80: Survey Says - While most episodes of the podcast are devoted to a single topic (usually with one or two guests also sitting in), it's great to hear the hosts riff on a whole bunch of subjects as they do on this episode. A combination of a 45-question online survey and listener-submitted Top 5 suggestions give the crew plenty of ammo to cover a lot of territory, once again offering glimpses of their different tastes and switching up the usual deep-dive approach to a more rapid-fire pace.

6. Episode 117: Literary Horror - I come to Killer POV because I'm obsessed with horror movies, but this episode featuring guest Del Howison, proprietor of L.A.'s Dark Delicacies bookstore, turned me on to a bunch of horror novels and authors I now want to check out. Yes, I've now not only given hundreds of hours of my life listening to the show and watching dozens of film recommendations, but now I have to read too. This is another typically great conversation about a topic that's not covered all that often even in horror circles, especially not with this degree of reverence and depth. One of these days I'll actually make it out to Dark Delicacies. 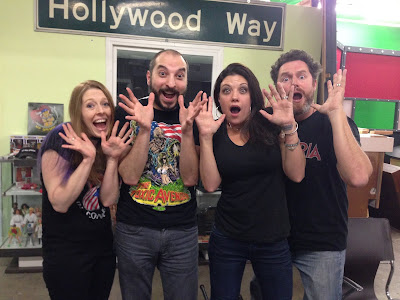 5. Episode 90: Talking Scream Queens with Tiffany Shepis Any self-respecting horror fan knows Tiffany Shepis, an actress who got her start with Troma and has racked up more than 100 film credits since the mid-'90s. She's also outspoken and funny and very aware of the genre and her place within it, which makes this conversation a ton of fun. Shepis covers everything from meeting weird fans at conventions to working on the lowest of low budget movies, including some so sketchy she's not even sure they're real movies. She's been in the horror trenches for almost 20 years and has the stories to prove it.

4. Episode 102: William Malone's House on Haunted Hill - Director William Malone came on in part to promote a Kickstarter he had launched to fund his next feature (a campaign which sadly did not meet its goal), but the conversation stretches back to his days of making low budget features in the '80s and running and gunning on the set of Freddy's Nightmares. He's also a collector of props and memorabilia, and the stories of how he snagged some incredible treasures (often because studios didn't realize there was a market for them in the pre-eBay days) are a lot of fun. He's got crazy Klaus Kinski stories, horror stories about making FearDotCom and so much more. The episode highlights one of my favorite aspects of Killer POV, which is its ability to humanize the artists behind the films that we love. Every time I hear a director interviewed on the show, I immediately want to go out and watch every one of his or her movies. That's something special. 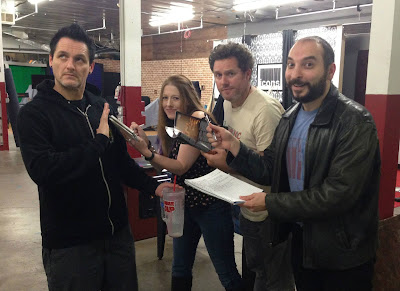 3. Episode 92: No Autographs Please! The Convention Episode - Horror celebrity Sean Clark has produced and directed but is probably best known as a talent agent representing dozens of genre celebrities, most notably Norman Reedus of The Walking Dead (the client most responsible for helping Clark build his empire). The episode looks at horror conventions and how much they've changed since the early days of Fangoria's Weekend of Horrors, becoming much more a business and money-making opportunity for guests who charge big bucks for autographs and pictures. Clark is a guy with a ton of inside knowledge and some insight into the direction things will continue to go until the bubble bursts, and the discussion is both fascinating and a little disheartening.

2. Episode 86: The Best Horror in 2014 - I'm a sucker for year-end "best of" shows, so it stands to reason that I would love this episode in which Rob, Rebekah and Elric count down their favorite horror films of last year. While Killer POV celebrates decades of horror all year long, it's great to hear an entire show affirming just how much good horror is being made right now (which the show always recognizes; it's just that this episode is only about that). I love when the hosts do "list" shows because it highlights the different kinds of films that speak to each of them, reminding us that there is horror for everyone. 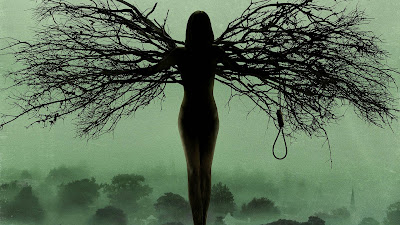 1. Episode 113: Witches! I know I said that these episodes are presented in no particular order, but that's probably not true of the Number One slot. This might be the very best episode of the show recorded in the last year, as it represents everything that's great about Killer POV. Director Adam Simon, the creator and show runner of Salem, is the guest and his background runs the gamut of horror: he started out working for Roger Corman and has amazing tales to tell about that, but he's also incredibly intelligent and well-versed in horror, having directed the great documentary The American Nightmare. As if that wasn't enough, Simon and the hosts have an in-depth discussion about witchcraft movies, a sub-genre I didn't even think I was that interested in but which becomes fascinating thanks to the level of depth and analysis they bring to the conversation. If you're a real horror fan and want to hear just one episode that will make you understand why Killer POV is the best horror discussion happening anywhere these days, this is the one you should check out.

But don't be an asshole. Check them all out. It will make your life better.

New episodes of Killer POV post every Friday on GeekNation.
Posted by Patrick Bromley at 5:00 AM