Great Horror Performances: Anthony Hopkins in The Silence of the Lambs 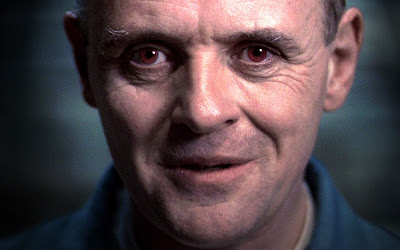 Because it has become such a part of popular culture, endlessly referenced and parodied, Anthony Hopkins's superb performance in The Silence of the Lambs tends to get overlooked. In the museum of great American stuff, it just IS -- like Mount Rushmore or Snickers bars.

Hopkins is one of only three actors to ever receive an Oscar for a performance in a horror movie (The other two are Kathy Bates for Misery in 1990 and Frederic March for Dr. Jekyll and Mr. Hyde in 1931, but that was a tie and he had to share it with Wallace Beery.) Silence of the Lambs stands as the only horror film (of the three ever nominated: the other two are The Exorcist in 1973 and Jaws in 1975. Good Grief.) to win the Best Picture Oscar. Perhaps the film’s rough outline (and Hopkins' amazing performance) convinced the faint of heart that they were actually watching a police procedural.

I find many similarities between Jonathan Demme’s Silence of the Lambs and Alfred Hitchcock’s Psycho. Both directors know that the impact of their main character (Hannibal Lecter in the former and Norman Bates in the latter) is actually enhanced by limiting their screen time. Neither character appears until about twenty minutes in, both characters’ scenes are the highlights of their respective films, and both characters give us insight into what a very specific kind of madness looks like. They are both still, small centers that are, inside, teeming with a very different sort of life.

Anthony Hopkins is assisted in creating this unique character by the sheer amount that other characters talk about him. At one point Clarice Starling (Jodie Foster) gets a briefing about the dangerously psychotic Lecter, and director Demme pulls off a neat trick that few horror films manage.

Dr. Chilton warns, “I am going to show you why we insist on such precautions. On the evening of July 8th, 1981, [Lecter] complained of chest pains and was taken to the dispensary. His mouthpiece and restraints were removed for an EKG. When the nurse leaned over him, he did this to her. (He shows Clarice a photograph) The doctors managed to reset her jaw more or less. Saved one of her eyes. His pulse never got above 85, even when he ate her tongue.”

When we think back on the film that we have just seen, we remember the incidents described as real scenes instead of mere speeches. It is a neat reversal of “show, don’t tell” and it revs up our anxiety before we even meet the character for the first time!

Of course, Hannibal Lecter also serves to make the piece’s real villain, Buffalo Bill, seem even more atrocious by comparison. Demme keeps rubbing our noses in the contradictions between two different kinds of serial killers: one who is polite and knows how to pair human flesh with the correct wine selection and another who bellows that “it puts the lotion on its skin or else it gets the hose again.” I also love the line at the film’s conclusion, when Clarice theorizes that Lecter would never come after her because “he would consider that rude.” 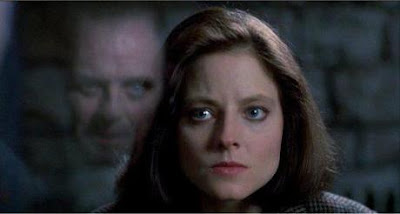 Hopkin’s affect as Lecter is marvelously achieved -- the generic voice, the fact that he never blinks once, and the complete lack of any wasted motion. This I find to be the scariest aspect of the performance: the terrifying quickness with which Hopkins moves from meditation to action. That “breakout scene” in the cell reminds us that our lives can turn on a dime, that good fortune can turn to bad in a flicker of an instant, emphasizing the random nature of our lives. The speed at which bad things sometimes happen is infinitely scarier than having one's liver eaten with fava beans and that nice Chianti.

Don't you agree, Clarice -- all good things to those who wait?
Posted by Patrick Bromley at 12:00 PM