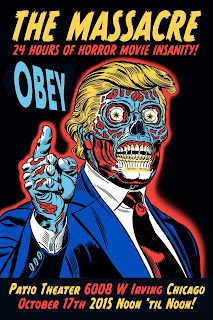 It’s been a good run but now it’s time to say goodbye.

Note: I’m going to complain a lot in this column. If you don’t want to read a buzzkill, you might want to skip this one. Sorry in advance, but I have to be honest -- otherwise, what’s the point?

This is actually a painful column for me to write. I’ve been going to most Massacres (Chicago’s original 24-hour horror movie marathon every October now at the Patio Theater) since their inception back in 2005, but something just doesn’t feel right about them anymore. Or maybe I’ve changed. In any event, I’m pretty sure I went to my last Massacre this past weekend and next weekend very well may be my last Music Box of Horrors (the cross-town 24-hour horror movie marathon that runs every October at the Music Box Theatre). I don’t want to say I’m too old for them, because age has nothing to do with it but maybe I’m just a different movie watcher than I was 10 years ago – i.e. more rigid, more of a homebody, etc. Something’s different and I’m trying to figure out what. I will say, though, that this year’s Massacre was especially well-attended, which is great for the hard-working people that put on this event.

10:30am: The day started out rough as I was driving down Irving Park road on my way to the Patio Theater. Suddenly, at a stop light, I saw a car hit a dog crossing the street at a pedestrian crosswalk. The dog seemed fine but the driver sped off. I couldn’t see his plates in time, otherwise I would have called the police and reported him because he’s an asshole. Not a good omen for things to come.

11:00am: Doors were supposed to open at 11am, but instead opened about 20 minutes later. I got to chatting with the guy in line in front of me. He was a total weirdo. He told me that he was eating meat for breakfast and having the “hair of the dog that bit me” as he took a swig of his Belgian beer can wrapped in a plastic bag. He was also rolling his own cigarettes. When I told him that I just went to the diner across the street for breakfast he said “I bet they saw you coming a mile away!” WHAT..THE..FUCK..DOES..THAT..MEAN???? As I write this I’m thinking that maybe I’m being an asshole or intolerant and the guy was fine. But now I remember he told the giant skeleton outside greeting people in line that it was doing a “Heil Hitler” when it waved at someone’s camera. So, yeah, he was a weirdo.

11:30am: As I was out in the lobby picking up some cheap DVDs, one of our listeners came up and introduced himself. I will leave his name out just in case he doesn’t want me to say who he is, but it was great to meet him and he was a super nice guy. I hope he had a great time at the Massacre and I look forward to reading his 7-word reviews of the movies at the event!

11:35am: This was usually when the folks hosting the Massacre would run a trailer block but that has since seemingly been retired. A major bummer. Instead, we saw about 30 minutes of shorts directed by local filmmakers. The usual mixed bag. Some really good and some not so much. There are some really talented people out there and it was good to see some of their work. But honestly (especially since there were more shorts played later in the day), I would have loved to have seen some classic trailers. I’ve been spoiled by the previous tradition.

Instead of showing a silent feature (played to live organ accompaniment), this year’s Massacre played two short silent features, each running about 10 minutes a piece. I’m going to sound like an asshole but that’s fine by me, as I usually space out during this portion of the program anyways...which is exactly what I did for Fall of the House of Usher. The House of Ghosts, though, was kind of amazing with some neat early special effects.

This was the movie I was looking forward to seeing the most at the Massacre for a couple of reasons: a) the DVD is out-of-print, so opportunities to see Dead of Night are rare and b) I get to see it in a theater with an audience which is awesome because I wanted to see how they would react to the final five minutes of the movie, which are a doozy. To my chagrin, the sound was really bad during Dead of Night, so much so that I couldn’t make out what the characters were saying on screen most of the time. Additionally, they were playing a DVD (more on that later; no 35mm prints or digital this year it seems) which was a bummer because I was hoping we were going to see Dead of Night on film. Lastly, the final 30 seconds or so of Dead of Night is a big twist and that part of the movie was obstructed by people moving around or emcees talking, etc., so I don’t think half the people (most of whom cheered beforehand that they’d never seen it) even got what the closing images of the movie signify. Sigh.

2:15pm: In between movies, the folks at the Patio Theater did not turn on the lights in the auditorium, which was a continued annoyance throughout the rest of the day. I talked to JB later in the evening and he was probably right – I don’t think they knew how. Also, at this time, there was a brief Q&A with Deanna Dunagan, who played Nana in The Visit. I’m not sure why they had a Q&A with her (none of her movies were playing) but she seemed nice and she was out in the lobby signing autographs for free, which is cool. The interviewer was more of a hype man than an actual interviewer but his heart seemed to be in the right place, so good on him I suppose. The acoustics for this Q&A (and the later ones) sucked ass so I could barely hear what anyone was saying most of the time. Before the next movie I went out to the concessions stand and got a bag of stale popcorn and a can of Coke. It cost me $10. At a revival theater. Fuck the Patio Theater. I’m a grump. 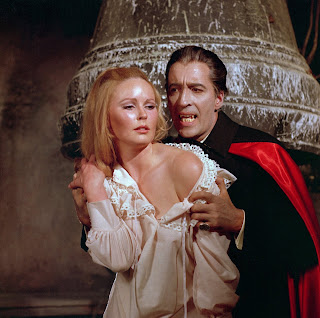 The Massacre turned around a little bit beginning with Dracula Has Risen From the Grave. I’m woefully behind on Hammer movies so it was nice notching another one on my belt. To my surprise, I really liked this one. I’m probably in the minority here but I think I like this entry more than Horror of Dracula. The movie looked beautiful on the big screen. Like a Blu-Ray should (snark). I’ll say it here and drop it for the rest of the column: it’s an insult to charge people to come to a movie theater and then play them a Blu-ray instead of an actual print of the movie. The Massacre used to pride themselves on showing prints. Now I might as well stay home and watch things on my television. There. I said my piece.

This was probably the high point of the Massacre for me. Gremlins 2 PLAYED for an audience, especially the sequence where the print of the movie breaks due to Gremlins on the loose. The audience reaction to that scene was priceless and great to see again in a movie theater. It had been a long while since I’d seen Gremlins 2 and I think I liked it more than I ever have. It’s such a creative, fun, lively and vibrant movie. Joe Dante is a genius.

I got to see F This Movie! follower Luke Ciancio’s movie. Great job Luke! My previous comment on the shorts remain. Some were great, some not so much but I’m happy to have seen them all. 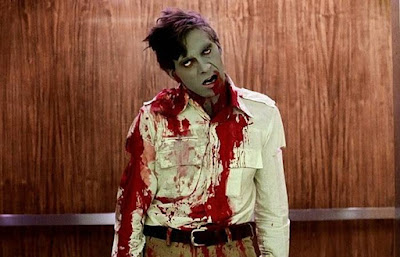 It had been a long while since I’d seen Dawn of the Dead as well, so I was very much looking forward to it. The screening at the Massacre didn’t disappoint. Much like Gremlins 2, Dawn of the Dead really plays for an audience. Halfway through the movie, our own JB texted me that he was in the house. I joined him after Dawn of the Dead was over (and following another botched/awkward/AV disaster Q&A with DotD star Scott Reiniger) and we caught up about how each other was doing, the Massacre itself and recent movies like The Martian (we both liked it) and Crimson Peak (JB enjoyed it, I have not yet seen it). This was the time my eyes began burning and I realized that I was getting too tired to see the entire 24-hour marathon through (my original plan since I was writing a column on it). I would have preferred to continue talking to JB (which is always fun) but instead Demons was starting with star Geretta Geretta in person (not a typo, that’s her name).

I’ll admit that a movie like Demons is not my kind of horror, so the wind went out of my Massacre sail completely at this point. It was cool that, before the movie, the Massacre put on a Looney Toons Halloween-themed cartoon. I liked that but then having to watch Demons was a drag, especially because me and JB were sitting in front of the MOST ANNOYING GUY IN THE HISTORY OF THE WORLD. He would loudly laugh at random things (and yell out at the screen) a la Max Cady in Cape Fear, he would carry on full conversations with his wife/girlfriend and he got up and out of his seat (no bullshit) maybe six times over the course of a 90 minute movie. I wanted to kill him. He made my skin crawl and he is single-handedly the element most responsible for me leaving the Massacre early. It’s not like the guy was 16 years old (which I could understand if not condone). He was probably in his late 30s/early 40s. Un-fucking-acceptable! Demons was followed by another Q&A, this one with Geretta Geretta, but at that point they could have been talking to Jesus Christ and I wouldn’t have cared. I was in that bad of a mood.

Since JB was leaving anyways I decided to take off too. This year was not a complete disaster but it was close. I’m too set in my ways and intolerant for a public 24-hour horror marathon anymore I think. I’m more on the film festival speed than the Marathon speed these days. I would much rather sit at my place with a select group of friends and lounge in my pajamas, watching horror movies of my choice, with better food, classic movie trailers and comfy seats. I used to look forward to going to the Massacre quite a bit, but like most other hobbies in my life (collecting baseball cards, improv etc.), this one is drawing to a close. 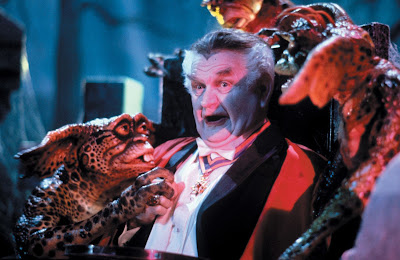 Thank you, The Massacre, for the memories. You were where I saw movies such as The Thing (1982), Halloween III: Season of the Witch, Deathdream, The Old Dark House, Eyes Without a Face, May, Bucket of Blood, The Abominable Dr. Phibes and more for the first time. For that I am forever grateful. Now it’s time to go our separate ways but I wish you the best. From my home. In my pajamas.
Posted by Patrick Bromley at 12:00 PM

Email ThisBlogThis!Share to TwitterShare to FacebookShare to Pinterest
Labels: 2015 scary movie month, 24 hour festival, like you were there, the massacre