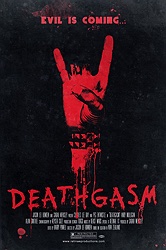 Deathgasm, the latest horror comedy out of New Zealand (a country that produced both What We Do in the Shadows and Housebound in just the last year), is a bloody good time -- a celebration of monsters and metal and gore and all the stuff our parents didn't want us exposed to growing up. It is a clear labor of love from first-time writer/director Jason Lei Howden, who channels early Sam Raimi, Peter Jackson and Edgar Wright into a messy but energetic horror film with a handful of likable characters and its heart in the right place.

Milo Hawthorne plays Brodie, a teenage metalhead outcast living in misery with his aunt and uncle. He's picked on at school at pines for Medina (Kimberly Crossman), a girl outside of his social circle and way out of his league. When Brodie befriends a fellow metal lover in Zakk (James Blake), they form their own band -- DEATHGASM -- and summon a demonic outbreak playing some mysterious sheet music they find in the possession of one of their idols. With the town overrun by demons and a cult trying to take over, Brodie and Zakk have to fight back and save the day with the power of their music. Totally not metal, or MOST METAL THING EVER? 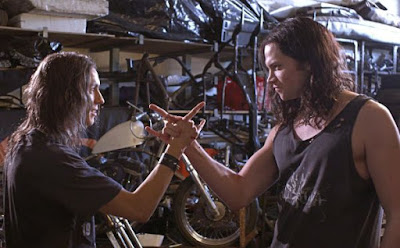 Financed in part with money Howden won in New Zealand's "Make My Horror Movie" contest, Deathgasm moves with great speed and confidence but not a ton of visual invention, as it's a movie that's reminiscent of a lot of other movies in its construction. That's hardly a problem, though, as it's reminiscent of a lot of other terrific movies; if Howden is mimicking other directors, he's chosen the right ones to mimic. There's an undue amount of pressure on new horror filmmakers -- especially when they make a really good movie -- to not just deliver a solid film but also announce the arrival of a new "voice" in the genre. I'm guilty of holding this standard, too, despite the fact that's true of hardly a single other genre. And while Deathgasm certainly conjures up traces of Raimi and Wright, the movie is still a distillation of Howden's voice in that it tells us who he is and what he loves. More films should be able to say the same thing, particularly when they're as entertaining and bloody as this one is.

It is the enthusiasm that boosts the movie to success. Howden's script lacks the polish of his filmmaking technique; relationships aren't always well defined, motivations are inconsistent. Both the villain and the climax fizzle out when they needed to explode in a fireball of metal fury -- we want to throw the devil horns up in the air but can only manage a cheerful shrug. (To Howe's credit, though, the identity of the "big bad" plays with certain villain tropes in a really fun way, even if the idea doesn't feel fully formed.) But any of these gaps are pasted over with charm and viscera, as Deathgasm boasts a lot of really fun -- and, from the looks of it, primarily practical -- makeup effects.  This is a movie that understands the value of a good gore gag, staging the splatstick with the energy and boundless glee of early Jackson and Raimi. 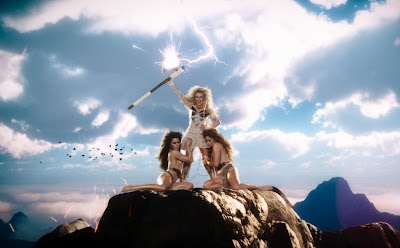 The film's breakout performance (arguably after Blake, here channeling Heath Ledger in 10 Things I Hate About You) is from Kimberly Crossman as the beautiful, popular blonde girl who learns to love both Brodie and heavy metal music. She's adorable and charming and swings a mean axe. Nearly every scene in which she appears is sweet and genuine, which makes it all the more frustrating when the character is asked to make choices that conflict with what we know about her or when the screenplay fails to really move her from a point of not knowing/caring anything about metal to falling in love with it. Deathgasm is sometimes to caught up in feeling like something is awesome to show us what it is that's awesome about it. On the plus side, Howden does a good job of laying his own heart on the screen. He loves horror and he loves metal and Deathgasm celebrates both. 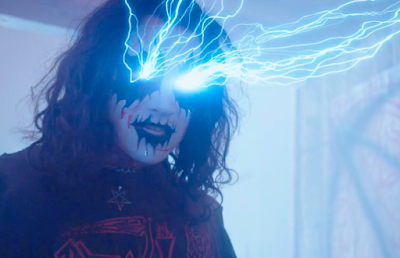 Heart sells it. Even in the rough patches or when other elements of the movie don't quite work, Deathgasm wins us over with the sheer joy of playing loud music while splattering blood across every surface. So much of horror is still so stigmatized that it's important to have filmmakers like Jason Lei Howden and movies like Deathgasm that celebrate the genre and remind so many of us in the audience what it was that we fell in love with in the first place: it can be loud and obnoxious and stupid and juvenile, but it's awesome. It's fucking metal, man.