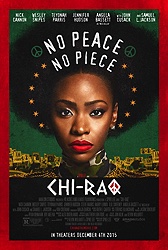 I am dumbfounded by how little I appreciated Chi-Raq.

Chi-Raq is a king’s folly. It’s the work of a great filmmaker who has completely lost his way. I am appalled by the fact that Spike Lee took an urgent and heartbreaking issue like gun violence in Chicago and turned it into essentially a sex farce. Dialogue about important topics are trumped by how many synonyms the filmmakers can come up with for penis, vagina or sex. Was Spike Lee trying to aim for high satire like Stanley Kubrick did in Dr. Strangelove? Or parody like Lee’s own powerful but problematic Bamboozled? Whatever the case, the message was lost on me in Chi-Raq despite the intermittent inclusion of some brilliant scenes, including an impassioned church sermon and a confrontation between a victimized mother and an insurance salesman. The issue is that each great scene is surrounded by a half dozen aggressively bad ones. I am a big fan of Spike Lee. I love Do the Right Thing, Malcolm X, 25th Hour, Jungle Fever and many more in his important catalog as a filmmaker. I hope that goes to show you, the reader, how much Chi-Raq broke my heart as an admirer of the director. Chi-Raq is borderline racist, too, boiling down white people to buffoons and black people mostly to individuals governed by their guns or their genitals. As a white person, I was offended. If I were a black man, I would be outraged. Lee’s thesis in the movie is also hambone and naïve to the point where I don’t even feel like he got to know anything about Chicago gang members before making this movie. I could be wrong, but they have the depth of a puddle in Chi-Raq. The depiction of the victims’ families and the community is what works in the movie, but it’s not enough to wipe the bad taste out of my mouth about the whole film. This is the angriest I’ve been at a movie all year.

The plot in brief: Chi-Raq is a modern day adaptation of the ancient Greek play Lysistrata, set against the backdrop of gang violence in Chicago. After the murder of a child by a stray bullet, a group of women organize against gun violence on Chicago’s Southside by creating a movement that posits that if they deny their men sex until there’s peace in the streets that it will enact change for the better in their community and around the world. 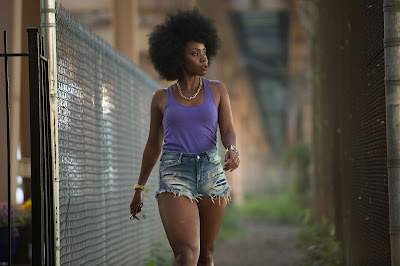 To show that I’m not an idiot, I get what the goal of the play Lysistrata is. It’s a comedy about one woman’s mission to end the Peloponnesian War by persuading the women of Greece to withhold sex from their husbands and lovers as a means to force their men to negotiate peace, a strategy that inflames the battle of the sexes. But Spike Lee shouldn’t do that under the backdrop of gun violence in my opinion. He’s doing the exact thing that he accused Quentin Tarantino of doing in Django Unchained, which is trivializing an important epidemic (in Django, slavery and in Chi-Raq, gun violence) and making it a piece of entertainment. Gun violence is more personal than war (especially nuclear warfare as portrayed in Dr. Strangelove) and you can’t have a movie that pokes fun at the issue while still including scenes of a mother wiping away the blood of their shot child off a sidewalk. In short, the idea to use Lysistrata as an inspiration for this movie (including a bizarre master of ceremonies played by Samuel L. Jackson) is wrong-headed. Again, this is my opinion. You may feel differently and Lee is entitled to make any film he wants.

Spike Lee strands his actors into playing cartoons at worst and fighting against the stylization of the material (most of the movie is told in rhyme). Faring best is John Cusack, who is the center of the film’s best scene in a church, and Angela Bassett, who is effortlessly good as a grieving mother. Among the rest of the cast, Jennifer Hudson is given the job of crying in almost every scene and little else and Nick Cannon and Wesley Snipes are playing characters of very little dimension or feeling. Maybe that’s the point, but that just strikes me as Lee being uninterested in delving deeper into these troubled individuals than anything else. The lead performance by Teyonah Parris is strong but she’s at the center of the film’s problems for the most part. Lee lets her down. It’s no fault of Parris’ performance. I also want to mention that the movie’s prologue and soundtrack are strong just to show I’m not completely hard-hearted in my assessment of this movie. 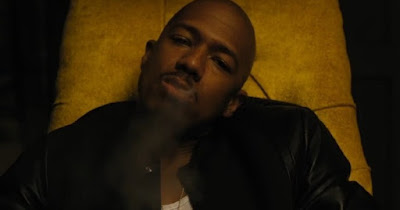 Chi-Raq is such a missed opportunity. That is what breaks my heart. Just as he did with race and interpersonal relationships in the past, Lee could have made a heartfelt and angry film about gun violence in Chicago but instead he turned it into a big joke with a limp dick punchline. If this were a movie about New York (like Do the Right Thing or 25th Hour), I doubt he would have taken the topic so lightly. From an insider to an outsider, Chicagoans (and serious filmgoers) deserve a better movie about the city of Chicago than Chi-Raq.
Posted by Patrick Bromley at 12:00 PM