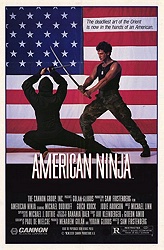 Cannon Films brings us more ninja goodness, one of the all-time great sidekicks and the birth of Dudikoff.

Say what you will about the cheap, often tacky, often bad movies made by my beloved Cannon Films, but some of what they did was, for lack of a better word, important. They brought ninjas to Western culture with a trilogy of films -- Enter the Ninja (1981), Revenge of the Ninja (1983) and Ninja III: The Domination (1984) -- and before long these shadow warriors had invaded popular culture everywhere. This may not seem "important" to you, but then you might not be a #HeavyAction fan. If you grew up watching action movies in the '80s as I did, you cannot understate the value of the ninja in contributing to one's education and burgeoning love of genre cinema.

But Cannon's ninja films -- particularly American Ninja, the subject of today's Heavy Action column -- serve another important function as well. They helped to bridge the kung fu movies of the '70s (those made by the Shaw Brothers, for example) with the shoot 'em up action movement of the '80s. Yes, Bruce Lee helped "Americanize" martial arts movies in Enter the Dragon, but Cannon brought them to the video store shelves, normalizing the art form within the context of more "accessible" action films. It's kind of like when Jean-Claude Van Damme brought Hong Kong action to the U.S. by hiring filmmakers like John Woo and Ringo Lam. It's not something he often gets credit for, but he helped changed the face of the American action movie. In their way, so did Cannon. 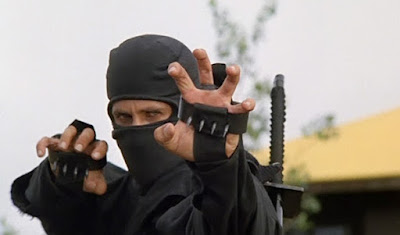 American Ninja, the first of a five-film series, is probably the most "Western" of all Cannon's ninja films to date. This was not by accident. Having found success with their three previous ninja movies, Cannon heads Menahem Golan and Yoram Globus set out to Americanize the subgenre to its fullest by making the hero a Yankee -- this despite the fact that two of the three ninjas in their original trilogy (Franco Nero and Lucinda Dickey) were presented as Americans. All they started with was a concept (an American ninja), a title (American Ninja) and a couple of mandates: in addition to it being a martial arts action film, it had to be a buddy movie and have some romance in it. Directing duties went to the great Sam Firstenberg, director of the second two entries in Cannon's Ninja cycle (as well as Breakin' 2: Electric Boogaloo), and the American Ninja train was leaving the station.

Originally intended as a vehicle for Cannon house star Chuck Norris (who declined the role for unspecified reasons, possibly [as one story goes] because he didn't want his face covered for much of the movie's running time), the part of the American ninja eventually went to Michael Dudikoff, an actor previously known for playing a goofball in comedies like Bachelor Party and Albert Pyun's Radioactive Dreams. He plays Joe Armstrong (I love that there is a ninja named "Joe Armstrong"), an American soldier stationed in the Philippines. He suffers from long-term memory loss and can only remember certain things like being in gangs and training in the martial arts, which is convenient when your career path is that of "American ninja." After being picked on and cast out by his fellow soldiers, Joe finally befriends Curtis Jackson (the great Steve James) and gets asked out on a date by Patricia Hickock (Judie Aronson), daughter of Joe's commanding officer. When the soldiers are attacked and wiped out by the evil Black Star ninjas and Patricia is kidnapped, Joe is reunited with master Shinyuki (John Fujioka) and resumes his training to become...you guessed it...the ninja from America! 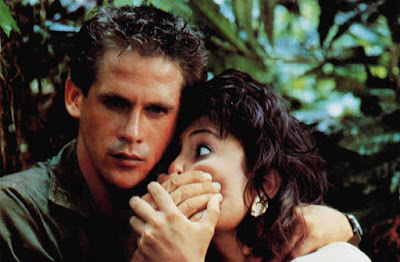 There's a lot to talk about with American Ninja, which, I'm ashamed to admit, I had never seen prior to watching it for the purposes of this column. For starters, the movie represents one of the first times that Cannon created their own star. Though they were best known for hiring existing action stars like Chuck Norris and Charles Bronson and giving them a home for 10-20 years, Michael Dudikoff remains one of the studio's only home-grown genre stars. He would continue to work at Cannon through the rest of the '80s, appearing in two more American Ninja sequels and movies like Avenging Force (a future #HeavyAction entry for sure), Platoon Leader and River of Death. A former model, Dudikoff has an all-American handsomeness and physicality born of both dance and mime training. He lacks the standout qualities of some of the A-list action stars of the '80s and '90s, whether it's Schwarzenegger's power or the abilities of a Seagal or Van Damme, but there's something pleasantly B-list about Dudikoff's action hero status. Had he shone brighter in any aspect of his performance he would have outgrown the scope of the studio's output. As it is, he and Cannon are a perfect fit.

Then there's Steve James, an actor conscribed to a career of playing sidekick to the (white) hero, whether it's here or in The Exterminator or Avenging Force or Hero and the Terror (his fate in all three of those movies being the same, which is even more criminal). He deserved his own action franchise, as he was a guy who had it all -- he could fight, he was ripped, he was handsome, he was charming. He's almost always more of a badass than the actor to whom he was playing second banana and made every scene in which he appeared that much better. That he passed away so soon (at age 43) is a tragedy not just for his family and loved ones but for action movie fans who were denied what would hopefully have been the one great role to break him out. I miss you, Steve James. 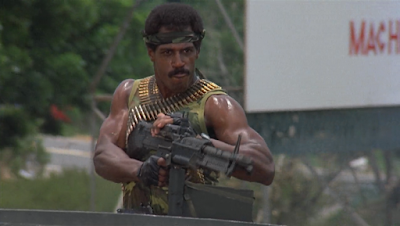 Though the movie is called American Ninja, it's not really until the last act that we get to see the American be a ninja (he's an American the whole time). The rest of the movie is about an American soldier fighting off a bunch of ninjas, but that's far too wordy a title -- it's an origin story for how an American got to be a ninja, I guess. The ninjas presented here are even more cartoonish than in past Cannon efforts, attacking exclusively in daylight, dressed in yellow and red shozoko and training at giant outdoor camps -- they have much more in common with G.I. Joe villains than they do with actual ninjas. When the shit really hits the fan in the final act and Joe has become the American ninja, director Firstenberg gleefully throws every '80s action trope on screen: there are evil businessmen escaping in helicopters, armies of ninjas and an entire platoon of American soldiers who show up with machine guns and rocket launchers. It's old school versus new school -- classic martial arts versus militaristic '80s firepower -- and it is joyous. Heavy Action indeed.

Joe Armstrong represents a departure from the usual Cannon hero, who were so often either fascist supermen or revenge-minded vigilantes. Joe is quiet and reserved, but not because he's the brooding silent type in the Eastwood tradition. He is decent and sensitive -- except for some questions about his past, he's a hero without a real dark side to him -- and there's a trickle down effect that frees the movie from Cannon's usual cynicism and ugliness. Don't get me wrong: the movie is still super violent and a lot of people are stabbed and shot and blown up, but it all feels weirdly innocent. The movie is as schlocky as a lot of Cannon efforts (the sub-A-Team score slathered throughout does not help), but Firstenberg's positivity and Dudikoff's sincerity combine for an action movie that believes not just in the mysticism of the ninja, but in real heroism as well. 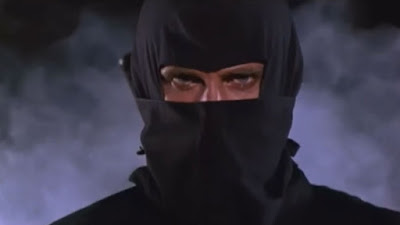 American Ninja is an instrumental film in Cannon's legacy and success. It's a movie that demonstrates that they, like Hammer and AIP before them, were capable of creating their own stars. It showcases the things they did well and that differentiated them from other studios. More than anything, though, it's a movie that helped carve out Cannon's place within cinema history, mixing every element that makes their movies special save for the sleaze. The very idea of nakedly coopting Asian culture and reappropriating it for an American lead may seem silly, but that's what Israeli-born Golan and Globus were all about -- they took the things they liked to see in movies and claimed it for their own. American Ninja isn't just a really fun and charming action film. It's practically Cannon's thesis statement.