24 Hours of Movies: Before They Were Famous 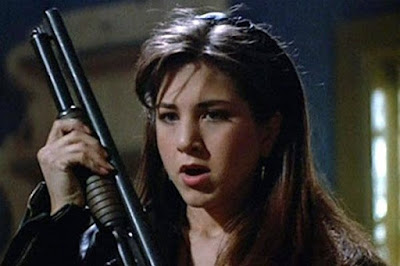 Can you believe that person was in that thing?

This week's theme was suggested by Kyle Mulford. Thanks, Kyle! I modified it a little so it's not just 24 hours of horror movies, but I made sure to include several in the lineup.

If you've got an idea for a 24 Hours of Moves theme you'd like me to try this month, leave it in the comments below or email us at fthismoviepodcast[at]gmail.com 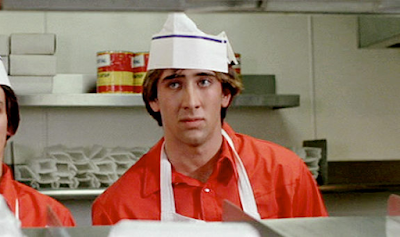 Like American Graffiti (as well as the movie that ends our marathon in 24 hours), Fast Times at Ridgemont High is one of those movies in which almost every cast member went on to big things. I'm putting it in the lineup for the appearance by Nicolas Cage Coppola, but there's also Sean Penn and Jennifer Jason Leigh and Judge Reinhold and Phoebe Cates and Anthony Edwards and Eric Stoltz and Kelli Maroney and Taylor Negron and the list just keeps on going. This is a great movie to kick off the next 24 hours because it's fun, it's punchy and it moves along impossibly fast. I don't know that I can declare it the best teen movie ever made, but it's certainly part of that conversation. 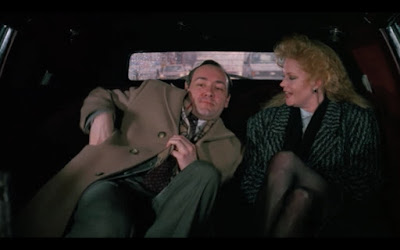 Both Kevin Spacey and Alec Baldwin show up for small roles in Mike Nichols' wonderful workplace comedy in which Melanie Griffith scams her way from the secretary pool into a high-powered desk job The gender politics haven't dated all that well, but the film is a great snapshot of a particular time in American history -- it's like the romcom version of Wall Street. I'm breaking with my usual formula of going bigger or crazier for the second entry in the marathon, mostly because Working Girl has a really good afternoon vibe. Plus we'll have Carly Simon's "Let the River Run" going through our heads for the next 20 hours. 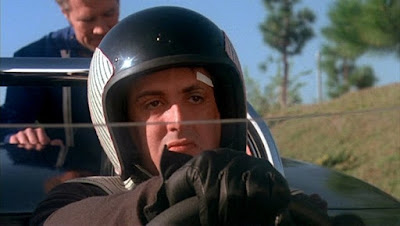 Now we get to switch gears (pun intended) and watch one of my very favorite movies, Paul Bartel's sci-fi action comedy Death Race 2000, produced by Roger Corman and featuring an early performance by Sylvester Stallone as "Machine Gun" Joe Viterbo, the villain to David Carradine's anti-hero Frankenstein. I love everything about this movie, from the cartoonish production design to the dark humor to the gratuitous violence to Mary Woronov being super foxy to Martin Kove's ridiculous performance to the sharp pre-Verhovian satire. It is, in its own specific way, perfect. 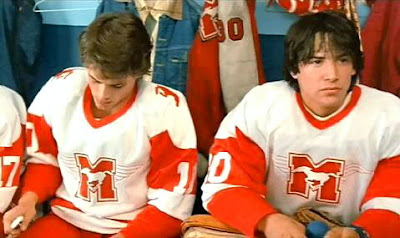 This coming-of-age hockey movie in which Rob Lowe learns the ropes from Patrick Swayze is mostly unremarkable except for two things: 1) it features one of the first film appearances of Keanu Reeves as the team's goalie and 2) the main character's actual last name is YOUNGBLOOD. The participation of the always adorable Cynthia Gibb makes the formulaic sports drama easier to swallow, and it will be nice to sit through something that's totally different from everything else in the lineup. This is one of the only situations in which I can really imagine looking forward to watching Youngblood. 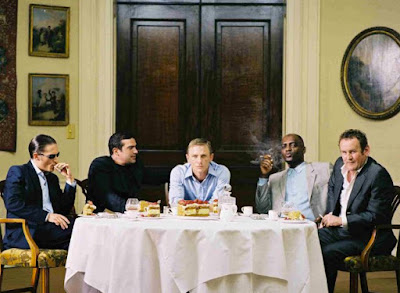 I really wanted to love Layer Cake, the directorial debut of Matthew Vaughn, back when I saw it back in 2004. Instead I thought it was just ok. It's certainly stylish and has some memorable set pieces, but I remember feeling like the whole was lesser than the sum of its parts. I'm looking forward to revisiting it now that co-star Tom Hardy has become a big star (even Daniel Craig wasn't as well known back then). If nothing else, it means I don't have to program Star Trek: Nemesis, which might still be the only Star Trek movie I can't enjoy at all. The whole British crime subgenre that experienced a domestic rebirth in the late '90s (mostly thanks to Guy Ritchie) was always something I liked without loving, which describes my memory of Layer Cake. Maybe another viewing will change that. 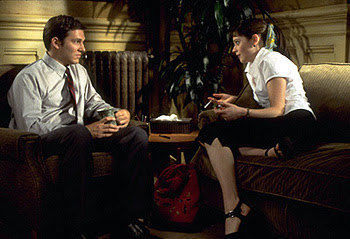 Now here's a movie I really do love, though I suspect I might be the only one. Lawrence Kasdan's all-star comedy drama tanked hard when it hit theaters in the doldrums of 1999, but I've always liked it and have only grown to appreciate it more the older I get. Loren Dean plays a psychiatrist (sort of) who shows up in a small town and has a big impact on its residents. I won't say more for fear of spoilers. I love how gentle and quiet and character-driven the movie is. That, plus the small-town feel, suggests that the film could have really been made in the 1940s -- minus some weird flashbacks and R-rated content. It will work well in the 7 p.m. slot, not just because it's got more of a "Hollywood" feel than a lot of the other films we'll be watching but also because it can act as the calm before the storm. This is a future candidate for a "Nobody Cares But Me" piece. 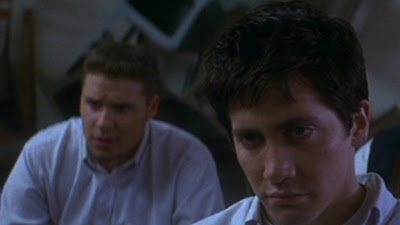 Richard Kelly's debut movie has a stigma attached to both for being somewhat overly praised in certain circles and because Kelly hasn't delivered on its promise in his two subsequent films, Southland Tales and The Box. (Of course I disagree about Southland Tales, and if you need me I'll be alone dying on that hill.) But Donnie Darko is still really terrific, particularly in its theatrical cut form before Kelly spelled out all of its mysteries in his director's cut. This is the perfect movie to transition us into the nighttime portion of our marathon, as it's a film that starts out fairly normal in idyllic '80s suburbia but gets weird fast. I'm programming not for the lead performance by Jake Gyllenhaal -- that dude's been around since City Slickers -- but for the small supporting role of one Seth Rogen. 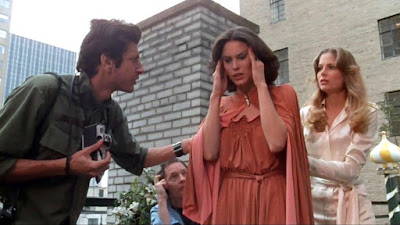 Ok, time to get weird. Here's how you know this marathon is going to be great: this is only the first of two Michael Winner movies we get to watch. A transparent attempt to cash in on the success of both Rosemary's Baby and The Exorcist, 1977's The Sentinel is a crazy, often tasteless movie because that's the only thing Michael Winner knows how to make. The cast is an insane mix of old and new Hollywood: Eli Wallach, Burgess Meredith, Ava Gardner, Chris Sarandon, Beverly D'Angelo, Christopher Walken, Martin Balsam, John Carradine, Sylvia Miles, Christina Raines, Tom Berenger and, most importantly for the purposes of our marathon, a very young Jeff Goldblum. This movie is bananas. I love it. 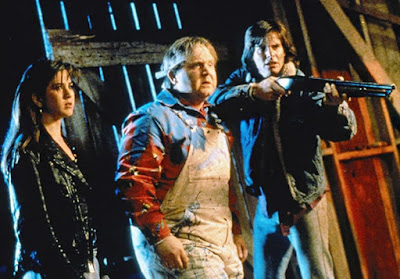 One of the most obvious choices in this marathon, as it shows up on just about every shitty Buzzfeed list of "Can You Believe So-and-So Was In This?" list clogging up your Facebook feed. When I used to watch this back in the '90s, I thought it was really lame -- another example of the rut in which the genre found itself during the decade. Now I'm able to see it as being goofy fun. It's not an out and out horror comedy (and nowhere near the level of intentional camp found in later sequels like Leprechaun 4: In Space or Leprechaun in the Hood), but director Mark Jones knows what movie he's making. Having seen 2014's Leprechaun: Origins, this original installment looks like a goddamn masterpiece. 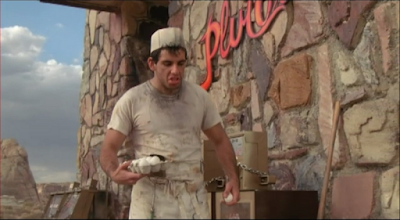 I can remember watching this on cable at the height of my Kristy Swanson obsession back in the '90s but I don't remember a thing about it except that it felt engineered to be a midnight movie. Kristy Swanson is kidnapped by a Hell Cop and taken to Hell (cop), where she must be rescued by boyfriend Chad Lowe. Gilbert Gottfried plays Hitler, because this is that kind of movie. Lita Ford shows up, as does Ben Stiller (who had already appeared in a handful of movies, including Empire of the Sun, Hot Pursuit and Next of Kin). His sister and parents are also in the movie, making Highway to Hell a family affair. Kino Lorber just put this one out on Blu-ray, so at least we'll be able to watch it in high def. 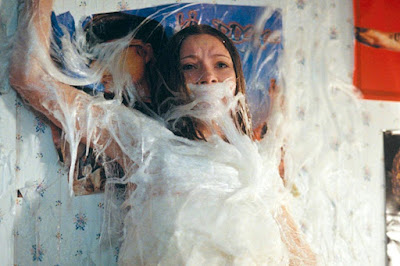 This underrated giant spider comedy starring David Arquette, Kari Wuhrer and a teenage Scarlett Johansson is the definition of goofy fun -- not as good as Tremors, but definitely made in that spirit. It's been years since I saw it so I can't say whether or not the CG-heavy spider effects hold up, but the movie has the right energy to wake us up as the sun gets ready to rise. 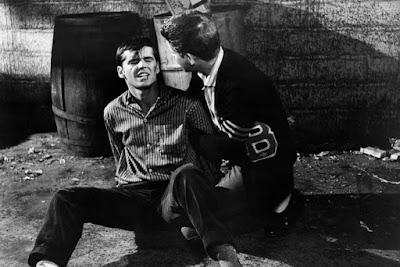 I know Little Shop of Horrors or even The Terror is a more obvious pick for early Jack Nicholson, but I've seen both of those and want to program something new to me. I know nothing about this movie except that it was produced by Roger Corman and is Nicholson's first film. It's also only 70 minutes long, allowing us to squeeze in an extra movie. Pragmatism! 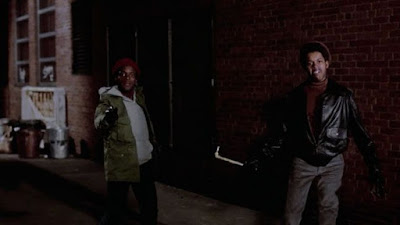 Our penultimate movie is our second Michael Winner entry, one of the most famous entries of my beloved "revenge movie" subgenre. It's grittier and more serious than its '80s sequels but also quite good. You might think I'm programming it into this marathon for the appearance of a young Jeff Goldblum, who plays one of the thugs that terrorizes Charles Bronson's Paul Kersey, but Goldblum has already been represented with The Sentinel. No, this one gets placement for the presence of Denzel Washington, playing "Alley mugger #1" for a few seconds before being shot and killed. His entire role lasts less than a minute and reminds us of the kinds of parts that were once most commonly available to black actors. Hollywood Shuffle was right. 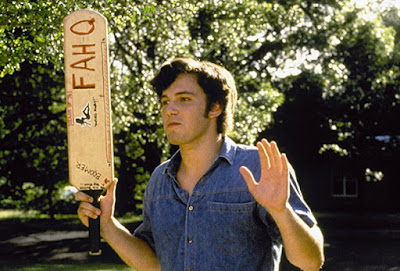 Let's end things with one of the best movies of the 1990s and another film with an embarrassing amount of "before they were famous" performances. The wistful, all-night hangout vibe of the movie is perfect for our last entry, and as the sun comes up on Austin and our heroes head off down the highway in search of Aerosmith tickets, I can imagine myself getting choked up partly out of exhaustion and partly from the beauty of that final shot of the open road ahead fading to black. Like Linklater's characters, we will have been through some shit in the last 24 hours but this is not the end -- only a new beginning.