Off the Shelf: Breaker! Breaker! (Blu-ray) 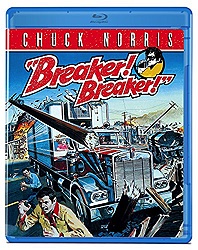 The battle cry of the great truckers war!

There is such an old-fashioned drive-in charm to the 1977 action movie Breaker! Breaker! that it bums me out to have to say that's also kind of dull. It's a movie about rednecks and moonshine and corrupt sheriffs and banjo music and big rigs and Chuck Norris kicking guys through barn doors. And maybe kicks one guy to death?

He plays JD, a California truck driver who comes to Texas City after learning that an old friend of his was paralyzed by a corrupt policeman belonging to an entire system that traps truckers to collect fake legal fees and bail money courtesy of Judge Trimmings (George Murdock). When JD's brother Billy (Michael Augenstein) falls victim to one of these traps, JD goes searching for him and winds up in big trouble with the Texas City law. Truckers to the rescue! 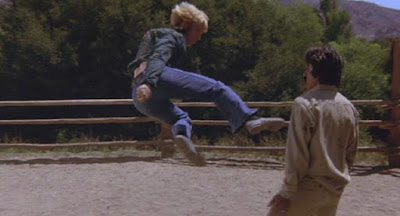 As great as a cross between Smokey and the Bandit and a Chuck Norris karate movie might sound on paper, Breaker! Breaker! isn't quite that movie. For one, it's not able to find a consistent tone; the villains feel like something out of The Dukes of Hazzard, the plot kind of like Road House and Chuck Norris' performance characteristically wooden and self-serious. There are at least three different movies going on in Breaker! Breaker!. While it might seem as though Norris is miscast as a guy stuck in the cab of an 18-wheeler, director Don Hulette wisely finds a number of opportunities to get Norris out from behind the wheel and in lots of hand-to-hand (and feet-to-face) fights. These are the only scenes in which Norris, here in OG '70s blue-jean-karate mode, excels. Were he capable of loosening up a little or exuding the slightest amount of charisma, Breaker! Breaker! could probably be a lot of fun. Instead it's just kind of fun. 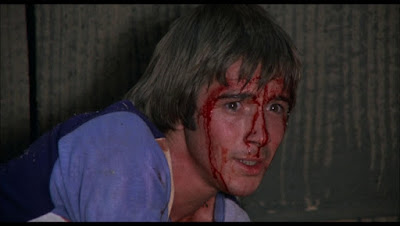 While I didn't necessarily love the movie, I would make a case that Breaker! Breaker! is one of Chuck Norris' better movies. Yes, I prefer some of his '80s-period shoot-'em-ups like Invasion USA and the genuinely good Code of Silence, but Breaker! Breaker! at least has the good sense not to foreground Norris too much -- the supporting cast gets a good deal of screen time and the truck driving stuff helps make him feel like a large piece of an even larger puzzle instead of having the carry the entirety of the film on his boring, denim-clad shoulders. At least an attempt is made to compensate for the star's shortcomings.

Enough of the elements are present in Breaker! Breaker! to make it an entertaining drive-in movie, especially for its 90 minute running time. What's missing from it, though, is the sense of anarchic fun one finds in the old AIP drive-in pictures -- this despite the fact that Breaker! Breaker! was distributed by AIP when it was originally released. Instead, this one is more of a traditional western complete with a final showdown and everything. Chuck Norris westerns are usually just ok. So are Chuck Norris trucker movies, I guess.


Buy Breaker! Breaker! from Olive Films here
Posted by Patrick Bromley at 5:00 AM