Put on your Hypercolor shirt, crank the Hootie and come back with me for some underrated '90s picks. 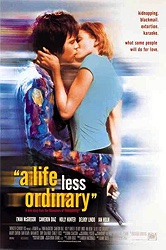 A Life Less Ordinary (1997, dir. Danny Boyle) Here's a movie for which I'm mostly alone in my love. Part of the charm of Danny Boyle as a filmmaker is that he consistently works in different genres, putting some kind of stamp on each one. This is his romantic comedy -- part road movie, part musical, part fantasy. It's his third movie and therefore filled with the wacky confidence of a young filmmaker who hasn't yet learned that maybe not everything should go in the same movie, but that's a big part of what I like about it. It's a mess, but it's a mess made with imagination, heart and joy. 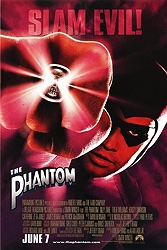 The Phantom (1996, dir. Simon Wincer) I've been beating the drum for this one for several years at F This Movie!. Dismissed for being too silly and considered yet another "bad" comic adaptation from a decade that saw more than a handful of those, The Phantom continues to age beautifully, in part because of its period setting and old-fashioned adventure sensibilities, but also because it provides such an antidote to some of the darker, angrier genre properties we're getting these days (and I'm not just singling out BvS). This movie is great fun, with a scene-stealing performance by Treat Williams as one of the best villains ever and a number of quotable lines like "No smoking in the Skull Cave." 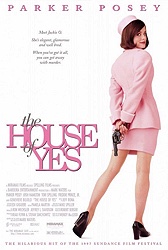 The House of Yes (1997, dir. Mark Waters) Confession: I have not seen this movie since its theatrical run, when one of our local mall theaters turned itself into more of an arthouse for a time and I was able to catch matinees of movies that didn't otherwise get a wide release in suburbia. I have no idea if it holds up. I remember finding it surprisingly funny and twisted and that it offered (yet another) Parker Posey performance that played to her strengths during a decade when she was ubiquitous in indie film. Even Tori Spelling and Freddie Prinze Jr. are well cast. It's a movie about madness, family, incest and the Kennedy assassination, which all sounds so annoyingly '90s when I type it out but which I remember working as dark comedy. I also remember having high hopes for this as it was the filmmaking debut of Mark Waters, brother of screenwriter Daniel Waters (The Adventures of Ford Fairlane, Heathers). It was a promising start. Now he's directing Mr. Popper's Penguins and Vampire Academy, so maybe the '90s knew something we didn't. 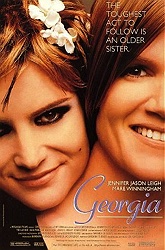 Georgia (1995, dir. Ulu Grosbard) This one is a downer, but it's a downer worth seeing if you're as much of a Jennifer Jason Leigh fan as I am. She plays the fuckup sister of Mare Winningham's successful, together country singer, and it's one of her best, most raw performances. Shame it's been so overlooked. The music is good when it needs to be (Winningham's stuff) and bad when it needs to be in just the right way (Jennifer Jason Leigh is also trying to be a singer, but lacks the talent). The actors perform their own stuff, which always helps in this kind of film. It's a really emotional, really draining stuff that deserves to be seen by anyone up for that kind of thing. Let us never forget that Jennifer Jason Leigh is the best. 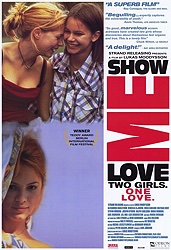 Show Me Love (1998, dir. Lukas Moodysson) I'm a sucker for a good coming of age story, and Swedish filmmaker Lukas Moodysson's debut feature Show Me Love (aka Fucking Åmål, a decidedly less sweet-sounding title) is a really good coming of age story about first love between two teenage girls living in a small town in Sweden. The '90s were often so caught up in finding the "next big thing" that filmmakers like Moodysson -- who makes more carefully observed, less showy films -- ended up overlooked. I still haven't seen all of his films but have consistently loved the ones I have.
Posted by Patrick Bromley at 12:00 PM