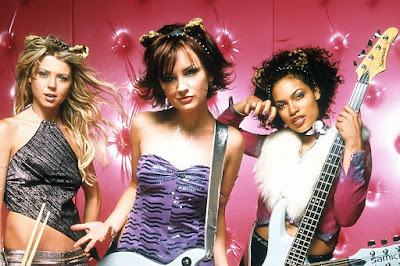 There are so many movies about bands trying to make it big, both fictional and based on real musical acts. Here are several that distinguish themselves by being about all girl groups. Some, like Spice World (not the worst) and Jem and the Holograms (haven't seen) aren't on the list. It's not because I forgot them, commenters. 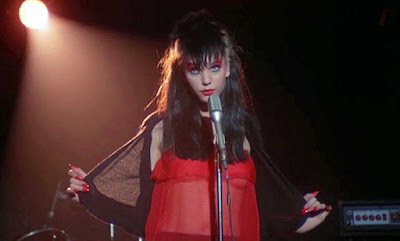 1. Ladies and Gentlemen, The Fabulous Stains (1982, dir. Lou Adler) This movie rules. A super young Diane Lane and a super young Laura Dern are two-thirds of The Stains, an all-girl punk band that rises and falls in the course of record producer Lou Adler's rare directorial efforts. I love the anger and the energy of this movie -- the cinematic equivalent of the bratty sneer Diane Lane wears for the entirety of the running time. Ultimately it's another cynical treatise on the music business and the inability for punk to sustain itself; sooner or later, everyone sells out. I like the first half better. 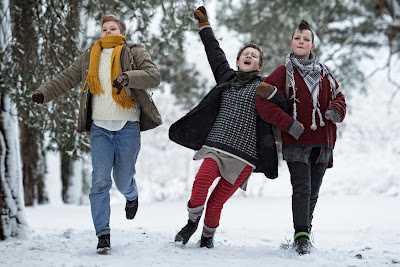 2. We Are the Best! (2014, dir. Lukas Moodysson) Whereas The Fabulous Stains is all attitude and posturing, Lukas Moodysson's We Are the Best! is pure joy and one of my favorite movies of 2014. Three pre-teen girls in 1980s Sweden form a punk band mostly to complain about jocks and the culture of sports they see around them and the results are exploding-heart great. Sure, there's a little bit of commentary about how metal started to push punk out in the '80s, but the film is mostly a celebration of friendship, of youth, of doing something you love and giving anyone who doesn't like it the finger. 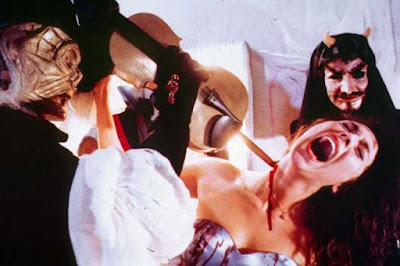 3. Paganini Horror (1989, dir. Luigi Cozzi) The last horror movie directed by Luigi Cozzi is a far cry from great -- possibly even good -- but I like that its cast is populated almost entirely by women (a rarity in Italian horror) and is co-written by the great Daria Nicolodi, who also stars. The girl band (plus one boy) stuff is mired in too much faux-MTV '80s excess, almost as if Cozzi was receiving transmissions from the network five years after they originally aired and just copying that (as proof of this theory, the video they constantly reference in terms of chasing its success is Michael Jackson's "Thriller," which came out in 1983). The horror stuff isn't that great either, as the members of a band find themselves trapped in a haunted house and stalked by something evil when they discover a composer's long lost piece of music and co-opt it for their own hit single. But as someone who has very publicly fallen in love with this stuff in recent years, it's fun to see the "girl band" movie filtered through the lens of batshit Italian horror. 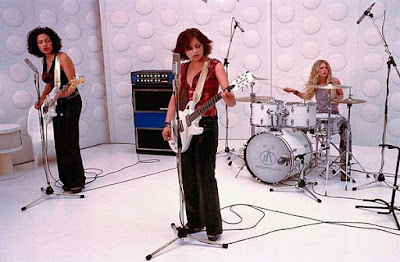 4. Josie and the Pussycats (2001, dir. Deborah Kaplan/Harry Elfont) It has been very rewarding to watch public opinion change on Josie and the Pussycats in the 15 years since it was first released to bad box office (it made back just over a third of its budget) and terrible reviews. As someone who saw it (alongside Erika and Doug) the night it opened, I could never understand why it was better received -- the three of us loved it. Sure, an adaptation of a silly Archie comic from the makers of Can't Hardly Wait might sound bad on paper, but it ended up being a wickedly sharp satire of the late '90s/early 2000s music business and a very funny movie in its own right. In fact, its total of-the-moment-ness ends up being its downfall in 2016; it was so current in 2001 that it's a complete relic now -- the plot depends wholly on CDs (what?) and MTV (huh?) and Carson Daly's abilities as a tastemaker. DuJour means seatbelts. 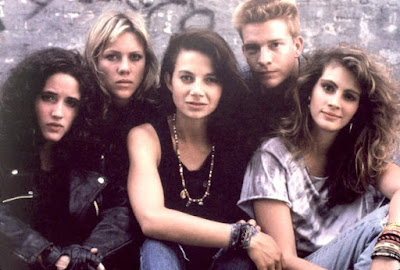 5. Satisfaction (1988, dir. Joan Freeman) I love Satisfaction. It is by almost every conceivable measure a bad movie. It represents the lone attempt to turn Justine Bateman into a movie star. It allows her to do her own singing, something she may or may not have been equipped to do. Remember Daphne Zuniga singing "Nobody Knows" in Spaceballs? Picture that, only instead it's covers of "Knock on Wood," "Mr. Big Stuff" and the eponymous "Satisfaction." It puts her into a summer romance with a moon-eyed Liam Neeson playing a washed-up record producer. It has an addiction subplot that it treats with all the seriousness of a Saved by the Bell episode ("There's no hope with dope!"). There was such a stink of the movie that when it ran on NBC after its short-lived theatrical run it was retitled as Girls of Summer. You're not fooling anyone, you fucking Peacock! This is motherfucking Satisfaction! It is the rare film produced by Aaron Spelling and it shows. The film's biggest bright spot is the supporting performance by a then-unknown actress named Julia Roberts as The Mystery's bass player. Even when the movie isn't working -- and that's most of the time -- you find yourself asking "Who is that?" I once wrote an impassioned open letter to FOX to get the movie released on DVD. My prayers were answered shortly thereafter. I seriously love it. 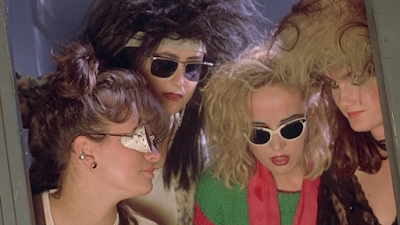 6. Vicious Lips (1988, dir. Albert Pyun) My man Albert Pyun made a lot of weird, culty sci-fi and fantasy movies in the '80s. Vicious Lips (aka Pleasure Planet) is one of his weirdest. In the distant future, a girl band gets a new lead singer (Dru-Anne Perry) and a make-it-or-break-it gig on a distant planet; now the trick is getting there on time. Unfortunately, their ship is marooned on a desert planet and an alien creature finds its way on board. Pyun's usual interest in visuals over narrative is on full display here; the film is all music and montage and production design. because it was made for Charles Band's Empire Pictures he actually had a little bit of money to realize his vision (not a lot, but enough). Long unavailable on any media save for the occasional showing on MGM HD, Vicious Lips is finally available on DVD on one of those four-film "all night movie marathon" discs from Shout! Factory. As a fan of these kinds of movies and a student of Albert Pyun, I dig it. Your mileage will vary. 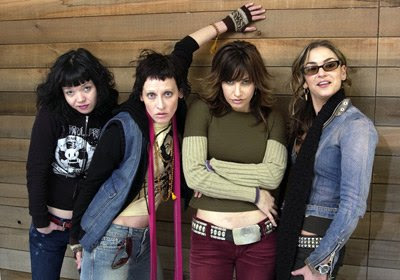 7. Prey for Rock & Roll (2003, dir. Alex Steyermark) Gina Gershon is turning 40 and has to decide whether or not to give it one last go with her all-girl punk band Clam Dandy (ugh), which also consists of Lori Petty and Drea de Matteo. There's a drug subplot, of course, and every other cliche tribulation we find in the "band struggles to succeed" subgenre -- it's like the tattooed, indie version of Satisfaction. But the music is decent, as it's written by Hedwig and the Angry Inch composer Stephen Trask, and Gershon really does give 110% to make the movie succeed. She even went on tour playing clubs with a real band to promote the movie, which became the basis of the IFC series Rocked, a show that was often more interesting and had more to say about life in a band than Prey for Rock & Roll manages to do. This movie will always have a spot in my heart for being the first title I ever reviewed for DVD Verdict, making it the first piece of film criticism I ever had published. You're welcome? 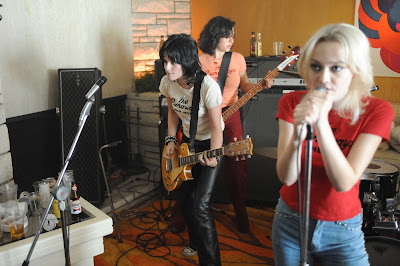 8. The Runaways (2010, dir. Flora Sigismondi) The only movie on this list that's based on an actual girl band (unless you count Josie & the Pussycats) tells the story of the influential Runaways, the rock band that kicked ass in the second half of the '70s and consisted of Cherie Currie, Joan Jett, Lita Ford, Sandy West and Jackie Fox. There's so much to like in this movie, from the energy of the music to the great performance from Michael Shannon as band svengali Kim Fowley to Kristen Stewart's really good turn as Joan Jett; it's a shame the film ends up feeling pretty generic. Currie (played by Dakota Fanning, who also does her own singing) ends up being the real star of the movie as it traces her progression from joining the band to getting addicted to drugs and out the other side -- in other words, the same trajectory as every other rock biopic ever made. There was the potential here to do something different, and there are moments in which it seems like director Flora Sigismondi (a celebrated music video director here making her sole feature to date) is going to carve out some new territory. It never quite comes together.
Posted by Patrick Bromley at 5:00 AM

Email ThisBlogThis!Share to TwitterShare to FacebookShare to Pinterest
Labels: albert pyun, gina gershon, girl bands, josie and the pussycats, music movies, rock movies, satisfaction, the runaways, we are the best