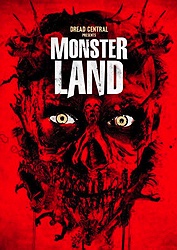 There are a lot of horror movies released every year. This is one of them.

Two of the most exciting things in scary movies right now are the rise of indie horror and the resurgence in popularity of the horror anthology. From the V/H/S and ABCs of Death series to Tales of Halloween to this year's Southbound and Holidays, it feels like we're getting a new indie horror anthology every couple of months. One of the reasons I love this is because they give established filmmakers the opportunity to work in short form, while offering a chance to sample what are essentially short films from a number of up and coming voices in the genre. I also love anthologies because they have the opportunity to reset every couple of minutes. If one segment doesn't work, that's ok. Stick with it and maybe the next one can turn things around.

That never quite happens with Monsterland, the new horror anthology produced by Dread Central's head honcho Steve Barton and carrying the "Dread Central Presents" banner. It's a follow-up to last year's Zombieworld, a similarly-structured grab bag of shorts submitted by a bunch of indie filmmakers. I have not seen Zombieworld. Based on my reaction to Monsterland, I might not need to. 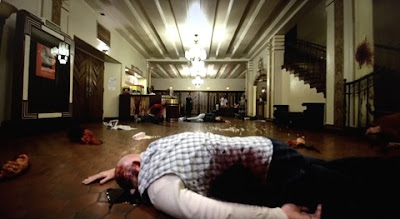 Things start off decently with a wraparound story directed by John Skipp and Andrew Kasch which presents a world within hours of an apocalyptic hell breaking out. A man (Josh LaCasse) takes refuge inside a movie theater, stepping over dead bodies on his way to get some popcorn and sits down to watch a feature called Monsterland. It's a fun enough way into the segments even if the apocalypse really doesn't play a role in shaping any of the rest of the movie -- it could have just as easily shown a guy sitting down in a regular movie theater and not much would be different. Still, I like the hook and it sets Monsterland apart, maybe for the last time.

From there, it's a barrage of shorts the each last only a few minutes and never really have a chance to overstay their welcome. That's the good news. The bad news is that the large majority of them just do not work. Take, for example, the first short, called "Don't Go in the Lake." A group of young people strip nude and go skinny dipping, then are eaten by an unseen monster. That's the whole thing. There's no tension, no twist, not even a cool creature design or gore gag to justify its running time. I get that these segments are largely made on micro budgets, but that liability has to be turned into an asset in some way -- let it fuel creativity, not limit the story being told. You can't just do the opening scene of Jaws minus all of the things Steven Spielberg brought to it. 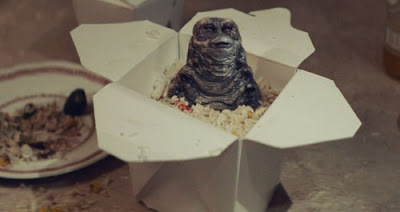 Some of the contributions are better. "The Grey Matter" is made with confidence and some humor, plus boasts one of the film's biggest stars in Girls' Ebon Moss-Bachrach. Unfortunately, it's too similar to Frank Henenlotter's Brain Damage to carve out its own space, all the way down to the little creature living in the protagonist's head. "Stay at Home Dad," again directed by Skipp and Kasch, has the courage to be completely crazy and introduces a couple different wacky ideas to stay funny and engaging. "Hag," directed by Erik Gardner, is one of the few entries that tries to be genuinely scary and manages to come close to the mark a couple of times. The best short, "House Call," stars Sean Keller and Ruben Pia (of Contracted fame), is about a guy in distress who shows up at the home of a dentist fearing that he's turning into a vampire. It's the best written, the best acted and the best directed of all the contributions to the film and the one that feels like it probably belongs in a better anthology.

My big issue with Monsterland isn't even that many of the segments don't work. Like I said, they're short enough and everyone is clearly trying their best to do something. I just don't think they add up to a movie in way that's satisfying at all. There is no consistency of quality, concept or tone -- something the best horror anthologies have. Imagine someone holding a contest in which horror filmmakers all submit their shorts, then slapping all of those entries together and calling it a movie. That's Monsterland. I don't know if that's actually how the movie was constructed (though the fact that IMDb says Gardner made "Hag" in 2014 suggests I'm on to something -- not by contest, but by assembling pre-existing shorts), but at the very least that's what it feels like. The segments don't talk to one another in any way. One just ends and the next one begins. Sometimes there are credits, other times not, meaning even that aspect is inconsistent and not in keeping with the unifying wraparound story. This really should have been released as a collection of short films under a "Dread Central Presents" banner, because calling it a movie is misleading. 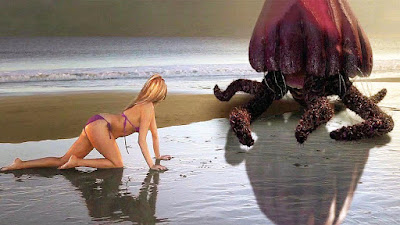 I normally don't like to publish negative reviews of truly independent horror films that require positive word of mouth and are made by young filmmakers trying to get themselves out there (something about not having any nice to say...), which is why I won't go in depth picking apart the segments I don't think work. My overall objection to Monsterland has more to do with the way it's been packaged together. I support a brand like Dread Central trying to bring exposure to up and coming voices in horror, but you're not doing them any favors when presenting work that a) isn't terribly strong and b) may mislead audiences into thinking it's a proper anthology -- which it isn't -- which is only going to make them resent the project and potentially the filmmakers involved. I don't think a lot of the segments in Monsterland work as short films, and I definitely don't think they add up to a satisfying movie. Your mileage may vary.