I Stream, You Stream Vol. 2

I'll probably be watching Joe Swanberg's new Netflix show most of the weekend, but here are some other options for when it's finished! 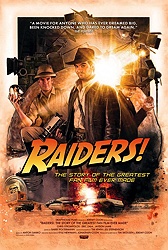 Raiders! The Story of the Greatest Fan Film Ever Made (2015, dir. Jeremy Coon, Tim Skousen) I saw this movie, about a group of friends who spent their childhoods remaking Raiders of the Lost Ark shot for shot except for one scene that they reunite to complete as adults, back at the 2015 Chicago Critics Film Festival. I found it very entertaining but somewhat problematic (it never quite deals with the question of why these people process art this way); still, it's absolutely worth watching because the story being told is so fascinating even when it occasionally comes up short as a film. (Watch on Netflix) 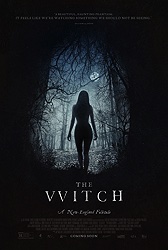 The Witch (2016, dir. Robert Eggers) Yes, #ScaryMovieMonth is still a week away, but maybe you can get yourself ready by watching what most horror writers are calling the best movie of the year (and, in some cases, the best of the last several years). It remains a movie I have tons of respect and admiration for but with which I don't have much of an emotional connection, but that's ok. I still recognize it as a great film. And Black Phillip is one of the best movie characters of the year. He will teach us all how to live deliciously. (Watch on Amazon Prime Video) Kicking and Screaming (1995, dir. Noah Baumbach) I know that I really should be recommending the new documentary The Beatles: Eight Days a Week (2016, dir. Ron Howard) because it's more or less a Hulu exclusive (though it is getting a limited theatrical run, which in many ways makes it even cooler that you can just stream it at home), but I haven't seen it yet and JB told me some things about it that convinced me not to recommend it until I have. I'm not taking shots at a movie I haven't seen yet, I promise. I will watch it. In the meantime, allow me to recommend one of my very favorite "walking and talking" movies of the mid-'90s: writer/director Noah Baumbach's debut feature Kicking and Screaming. It has a cast of Sundance all-stars of the era (era), including Eric Stoltz (of course), Parker Posey (of course), Whit Stillman regular Chris Eigeman (yes), Josh Hamilton (right) and many more recognizable faces in a movie about post-grad 20somethings trying to figure out life and romance. Nothing novel about the premise, but the dialogue is sharp and funny and the performances all strong. This is still one of my favorite of all Baumbach's movies. (Watch on Hulu) 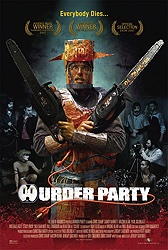 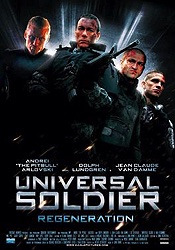 Universal Soldier: Regeneration (2009, dir. Jon Hyams) If you've read any of my #HeavyAction pieces over the last few years, you know that I have called Universal Soldier: Regeneration the best DTV action movie of all time. Director Jon Hyams completely reinvigorates the franchise after a couple of terrible sequels and makes a relentless, brutal combat film that's almost wall to wall action and adds a couple cool things to the mythology. He would take this all even further with the next movie, Universal Soldier: Day of Reckoning, which combines the balls-out violence of the previous film with a crazy nightmare art movie. For pure action, though, there's no substitute for Regeneration. (Watch on Crackle)
Posted by Patrick Bromley at 12:00 PM