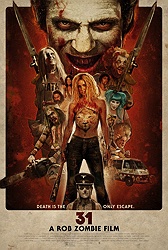 Every good streak must come to an end.

As someone who has been a fan and sometimes apologist for every single one of Rob Zombie's movies -- yes, including both his Halloween films -- it brings me no joy to be left cold by his latest effort 31. Partially crowdfunded and given what appears to have been a one-night theatrical release (through Fathom events) before appearing on VOD, 31 is the movie that Zombie's critics have always accused him of making: scuzzy, violent, unimaginative and concerned primarily with aesthetics -- whether or not things look cool -- instead of having something to say. It's what you might expect a Rob Zombie movie to be if he had never made another movie, much less some of the most interesting and distinctive horror films of the last 10-15 years.

Halloween, 1976: A gang of traveling carnies that includes Sherri Moon Zombie, Jeff Daniel Phillips, Meg Foster, Lawrence Hilton-Jacobs and Kevin Jackson, are ambushed and kidnapped and forced to play a game of "31" in which they are chased through a huge maze by a series of psychos trying to kill them. If they can stay alive for 12 hours, they are told they will be set free. And......that's it. 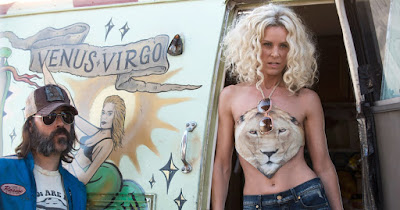 So 31 sets up a game in which regular people are hunted and killed by overly-costumed psychos. It's a white trash Running Man, except that The Running Man had stuff to say about media and culture and violence as entertainment. Zombie has the game of 31 (as a game, it's not very interesting; the rules are "people murder you") played out for the entertainment of some aristocrats, but once again we know nothing about them. They exist just so that Malcolm McDowell and Judy Geeson can wear a lot of makeup, but it's different makeup than the filth worn by everyone else because I guess variety? Again, this is a movie concerned with art direction and production design first. It might have helped matters if there was some point that Zombie was trying to make with the game -- or even if the pointlessness of the violence was the point. That's not really the case. The world he creates is about as well developed as his characters, which is to say it's thinly sketched at best.

Thin characters would be ok, too, if Zombie didn't seem so intent on leaning on them to carry what is essentially only a premise, not a plot. More than once in the movie we get flashes of who these people were before being forced to play 31 and it seems like Zombie is reaching for tragedy but it's just not there. We don't know them. We don't know them before they are kidnapped by psychos. We don't really get to know them in the course of the game. It might be sad when they die because it's sad when people die, but because 31 is so intent on reveling in brutality and violence for the entertainment of the viewer, it's almost impossible for the intended pathos to land. It's not like Zombie is incapable of making this balance work; he's already made a slasher movie that's both unrelentingly brutal and horribly sad with Halloween II. He's capable. But 31 just feels like an echo of earlier, better work.

That's really true across the board, and that might be what disappoints me most about 31. The movie is not all the different in conception or execution than his debut movie, House of 1000 Corpses. But that was 15 years and five movies ago. When Zombie first came on the scene, the genre was still in its post-Scream teen slasher and early J-horror phase. Corpses came out of nowhere and felt like a dangerous throwback to '70s exploitation and a love letter to the kinds of insane horror my man Tobe Hooper used to make. The Devil's Rejects built on that debut in a massive way and suggested that Zombie was a filmmaker capable not just of standing out but of making truly great films. Now it's 2016 and the genre has come so far in the years since and Zombie's own voice so distinctive that he's practically a subgenre unto himself. Seeing him backslide and coast on what we already know he's capable of doing in 31 is a real bummer, particularly after seeing him push himself into new territory with The Lords of Salem. 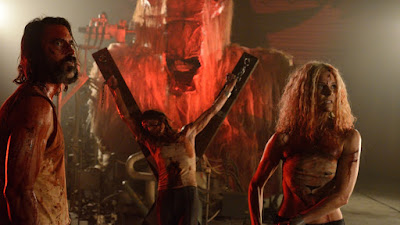 I come not to completely bury 31, though, because there's quite a bit in it that I like. While the characters are nonexistent on the page, the performances of Sherri Moon Zombie, Jeff Daniel Phillips and (especially) Meg Foster are all very good; they sell the desperation and the shift from being frightened victims to kickass killers totally convincingly. The movie is worth seeing just for the performance of Richard Brake (who previously worked with Zombie as the ill-fated paramedic in the opening of Halloween II) as "Doom Head," the most dangerous of the killers in Murder World -- the scariest of a scary bunch. Though he mostly bookends the film, opening it with a fantastic monologue and then returning about 2/3 of the way through, he's so good that he legitimizes even the bad choices. Sure, he's mostly playing the Bill Moseley character from Devil's Rejects, but his work is so scary and powerful that he manages to completely own the movie.

And as much as I may be frustrated by Zombie's preoccupation with aesthetics over anything else in 31, I also have to admit that it often looks great. Working for the first time with cinematographer David Daniel (who also shot Leprechaun: Back to the Hood), Zombie creates a number of striking, beautiful images even amidst layers of dirt, blood and greasepaint, none of which have been in short supply in his work. That more or less goes to shit during every action sequence because the camera is in too close and shaking throughout most of them, rendering them incomprehensible. The first chase sequence, featuring Pancho Moler, a little person dressed as Hitler (because a little person dressed as Hitler is, like, totally fucked up, right?), is a total drag -- poorly staged and endlessly long, devoid of any tension or investment. Things improve mid-movie with a dinner sequence that's insanely twisted and the appearance of a couple chainsaws; 31 is best when it's at its batshit craziest. That momentum, too, is destroyed with a sex scene that represents every single one of Rob Zombie's worst instincts. There are too many moments like that in 31. 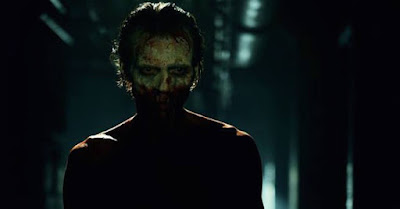 I've had a handful of conversations about 31 with fellow horror fans this weekend, several of whom loved it for being insane and uncompromising and very much like the trashy exploitation movies that inspired Zombie's entire career. I can't fault those opinions even if I don't share them. This, to me, feels like Rob Zombie posturing -- making a movie full of red meat for his fans but strangely impersonal at the same time. It's a weird mix: the movie is identifiably a Rob Zombie movie in every single way to the point of being self-parody, but at the same time seems like a movie made by someone impersonating Rob Zombie. If this is, as he has publicly stated, his last horror movie, I'm bummed that he didn't go out on a higher note. At the same time, maybe it's for the best. 31 feels like the work of a horror director who has run out of things to say. Except "fuck," of course.
Posted by Patrick Bromley at 12:00 PM