Cinema Bestius: The Silence of the Lambs

This film is a horror movie that goes to places that are irredeemably dark—but its tour-de-force performances and basic humanity favor the light… always the light. The more the Pope attends modern horror films (the good ones) the more the Pope sees beyond the film itself to familiar tropes, stock characters, “how-to” screenplay textbook structures, and mythic archetypes. One of my favorites of the latter is “trapped in the maze.” This goes all the way back to ancient mythology and the story of the maze and the Minotaur. The Minotaur is described as half beast/half man, which is a convenient metaphor for the antagonist in many, many horror films. The Minotaur lived in the center of a fancy maze designed by Daedalus—whose son Icarus, you might remember, flew too high on borrowed wings. Athenian hero Theseus eventually killed the Minotaur. Psycho used this mythic trope, as did Halloween, Scream, and the recent Don’t Breathe. All four of those films, befitting our modern age, used a multi-story house as the maze. No matter where you run, it always leads you smack back to the monster. 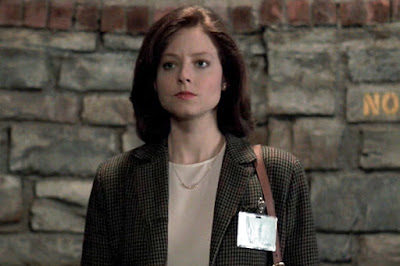 The Silence of the Lambs uses this trope judiciously and well. As an audience we keep getting dropped into the metaphoric laps of two unsavory, bloodthirsty men: one of them bad, the other one worse. No matter where our poor heroine Clarice goes, she is inevitably thrust back into the maze, which in the case of this relentless, scary movie, contains TWO Minotaurs.

The Plot In Brief: The FBI is investigating a rash of mysterious, violent killings. The murders are tied together with several grisly, twisted details, so lead investigator Jack Crawford (Scott Glenn) gets the bright idea to consult incarcerated serial killer and former psychiatrist Dr. Hannibal Lecter (Anthony Hopkins, in the performance of his career). Crawford sends rookie officer Clarice Starling (Jodie Foster) to interview him in prison, thinking he can use Starling’s innocence to bait the interest of the cunning Lecter. Starling engages Lecter in a series of interviews, in which he trades information with her “quid pro quo:” the confined psychopath will answer one of her questions in exchange for her answering one of his.

Meanwhile, the seemingly random murders continue. The media dub the killer “Buffalo Bill” because his victims are partially skinned. When Bill’s latest captive turns out to be a Senator’s daughter, new pressure is applied to the FBI to find the killer in time to save her life. Will Clarice successfully pry the information from Lecter? Will Lecter successfully plumb the depths of Clarice’s soul? Will the girl down the well rub the lotion on its skin… or will it get the hose again? 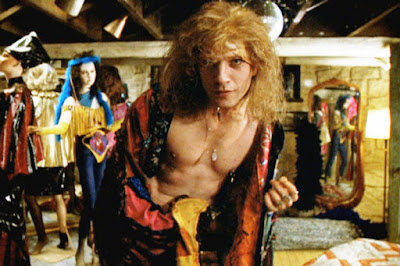 Two years ago, apostle Patrick Bromley described the greatness of this great, great film thusly: “[The Silence of the Lambs] is great because like almost every one of [director Jonathan Demme’s] movies, it respects and even loves its characters. Demme isn't just willing to listen to and understand them—he demands that we do it, too, framing all of them in his trademark looking-directly-into-the-camera shot… So many thrillers are about generating suspense with technique […] This one has staying power because it's actually about people—damaged people, broken people, maybe even evil people, but people nonetheless.”

Clearly, one of the best parts of the film and a major reason for its success (even in mainstream circles, where critics and fans can pretend it is a police procedural instead of the horror film that it so clearly is) is Anthony Hopkins’s performance as Hannibal Lecter. A year ago during Scary Movie Month, I was asked to opine on a horror performance that I particularly enjoyed. Of course, I chose The Silence of the Lambs and wrote, “Hopkins’s affect as Lecter is marvelously achieved—the generic voice, the fact that he never blinks once, and the complete lack of any wasted motion. I find the scariest aspect of the performance [to be] the terrifying quickness with which Hopkins moves from meditation to action. That ‘breakout scene’ in the cell reminds us that our lives can turn on a dime, that good fortune can turn to bad in a flicker of an instant, emphasizing the random nature of our lives.” 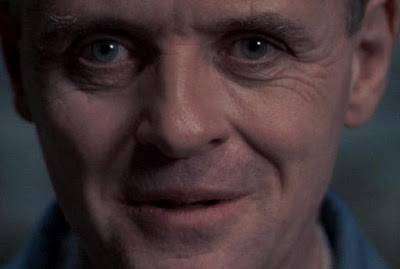 The Pope figured that this was one film about which all the critics agreed. The Pope figured wrong. Some critics at the time of the film’s original release had—let’s call it an “interesting”—reaction to the film. Is it just a coincidence that all three critics were based in Chicago?

In the Chicago Tribune, Dave Kehr wrote, “But The Silence of the Lambs does more than avoid sweetness and light. It’s a gnarled, brutal, highly manipulative film that, at its center, seems morally indefensible.” Gene Siskel, also in the Tribune, wrote, “director Demme superheats The Silence of the Lambs to the point of silliness, in terms of both gross behavior and a pulsating soundtrack. The conclusion of the film is nothing more than a grisly version of every mad-slasher picture you’ve ever missed.’ In the Chicago Reader, Jonathan Rosenbaum wrote, “An accomplished, effective, grisly, and exceptionally sick slasher film […] that I can't with any conscience recommend because the purposes to which it places its considerable ingenuity are ultimately rather foul [….] Not even the best performances and direction—and this movie has talent to spare—can justify the putridity of the enterprise.”

Going all “moral watchdog” on a horror movie is a losing game, let me assure you, and I am the Pope. It’s a movie. But there is a nagging theme in all of the above reviews, a barely below-the-surface subtext that this terrific film managed to touch these three esteemed gentlemen… in places they prefer not to be touched. Yet I cannot view this tour-de-force as morally indefensible, foul, or putrid. It’s as if those three reviewers—presented with Hopkins’s mesmerizing, charismatic performance—assume that Demme has positioned him as the moral center of the film. But in the trope of the maze, the one in the center is the monster. It’s Clarice who is our moral center—unwinding the thread through every twist and turn, shown feeling afraid and small and lost but never giving up, never turning back, until she has her moment to triumph.

The Silence of the Lamb’s Three Miracles: Anthony Hopkins’s beyond iconic performance, which, though it was been referenced and parodied to death, still retains its original power to unnerve; Jonathan Demme’s humanistic direction, even in the face of shocking inhumanity; and Jodie Foster’s nuanced performance as Clarice Starling—our sweet, guarded, canary-in-a-coalmine audience surrogate. She walks us boldly through the maze and ultimately, her victory is ours. Otherwise, how could we sleep at night? 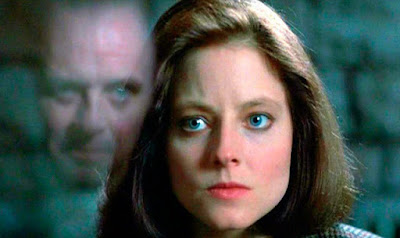 BONUS FUN: Recently, the Pope was canoodling about on the internets, as the Pope is wont to do, and discovered this. The band is called Greenskeepers and they also are from Chicago. This song was inspired by this week’s film. WARNING: Once you hear it, you will not be able to get it out of your head. (You will want it out of your head.) Check out the music video here.