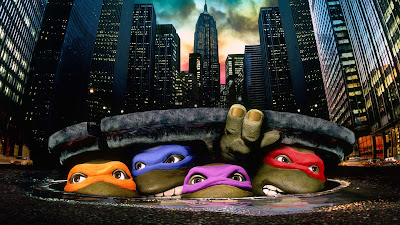 They're gnarly, they're bitchin', they're uhhhh mega... uhhh.

...They're the little green mutant teens that just so happen to be pizza loving turtles.

We have successfully conquered Scary Movie Month, and now it's time to return to our regular lives, whatever that might look like. Mine comes in the form of revisiting two great movies from my childhood, and the third, well, I'll just ignore that until it requires my attention. As a kid, we watched the '80s television animated series, played the video game, had the action figures and used to play ninja fights all the time. I'm fairly certain we also had quite a few comics, but being over 25 years ago, I can't quite be sure of much aside from the fact that I was a giant nerd. So when the first live action feature film was released we of course watched it, bought it on VHS and consumed it as necessarily as air. Us and the rest of the world.

Teenage Mutant Ninja Turtles (1990) directed by Steve Barron is easily one of my favourite movies from the '90s, possibly due to the sentimentality of long ago youth, and possibly due to the totally tubular awesomeness of the film. With live action, giant rubber suits with animatronic heads created by Jim Henson's Creature Shop, with three different actors required for each turtle (in-suit performer, face puppeteer and the voice actor), not to mention the relatable “real” characters for the first time outside of the animated universe, this film combined glorious amounts of awesomeness I had never before witnessed. The film's dark tone and dark characters, contrasted with our fun and exuberant heroes created a world any kid could easily lose themselves in. Hellacious, dudes. 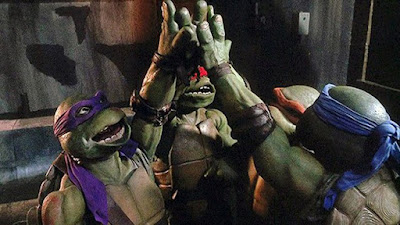 Now, watching it as an adult (or as close as I'll ever come to being one), none of the fun or awe with which young me fell in love with it was lost. I laughed even more at all the radical jokes, held my breath as Raphael and Casey Jones battle it out in their initial meeting, and was annoyed with April O'Neil's dumb screaming. I even found beauty in the darkness of the sewers. The only thing that would have changed is an increased appreciation for what was, at the time, the second highest-grossing independent film of all time. (And I thought my eyes were playing tricks on me, but I really did see a junior Skeet Ulrich as a foot soldier in there!)

The following year (am I correct in my assumption that it was even before the first film had made it to VHS), we were rewarded for our love of the original, with the sequel Teenage Mutant Ninja Turtles II: The Secret of the Ooze. All puns aside (well, sort of), this movie literally oozes of '80s and '90s nostalgia. It is in literal sharp contrast from the first film, being the light to the darkness, which is immediately noted in the opening scene. Fun, joking and playing with all the '80s and '90s items one might find in a time capsule from the era (era), our introduction to our favourite green ninjas is a playfully comedic piece, where no real danger is ever felt. 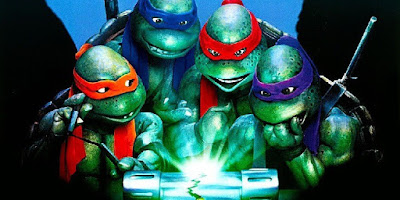 With this being my first ever time watching the trilogy from start to finish, the differences are glaring, right down to the change in voice actors and most obvious, April O'Neil's face has changed significantly. Judith Hoag was not asked to reprise her role of the famous reporter, primarily due to her complaints about the violence and darkness in the first film. (Which surprised me when I first read that as I didn't find the film to be all that violent. However, perhaps watching it on the heels of a month of beautiful bloody gore is not the best litmus test for violence.) Paige Turco took on the role, but perhaps the producers took to heart Hoag's concerns, as in the second film it is rare to see any of the turtles with weapons in hand. Even when Vanilla Ice is onstage dancing and chanting “Go Ninja Go Ninja Go,” it's mostly high kicks and dancing that defeats the enemy. Just like in real life.

Finally the third film, Teenage Mutant Ninja Turtles III. (1993). Yep, we live in a world where four mutant turtles are transported back to 1600 Japan and are meant to defeat evil to fulfill a prophecy. Turtles riding horses. Turtles not needing to learn Japanese because everyone speaks English. Turtles that have fallen and can't get up.

I did not like this movie. Not even Corey Feldman reprising his voice role for Donatello could fix this for me. 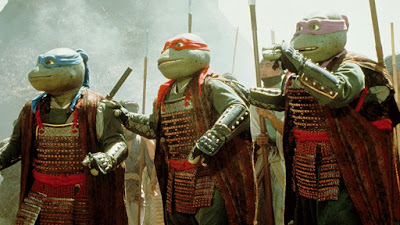 In the same way that most of us can boast of belonging to one of the Houses of Hogwarts from the world of Harry Potter, we can just as easily relate to one of the teen turtles based on their qualities and mannerisms. Mine has always been Donatello, awkward, brainy and awkward again. His was the action figure I chose as a kid and whose personality I feel I most identify with both then and now.

Because, uuuhhhhh, you know, Chevy Nova.