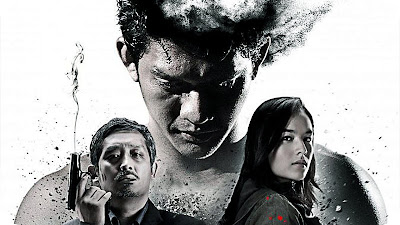 Picking up where The Raid movies left off. Sort of.

Headshot, the new Indonesian action film from directors Timo Tjahjanto and Kimo Stamboel, is going to remind a lot of its audience of The Raid and The Raid 2. This is not an accident. Tjahjanto has collaborated with Gareth Evans, director of both Raid films, most notably on their incredible "Safe Haven" segment in V/H/S/2. Headshot's star, Iko Uwais, is the star of both Raid movies. Julie Estelle, better known as Hammer Girl in The Raid 2, also has a major role. The main point of comparison, though, is the way it frames the action film: like the two Raid movies, this is a nonstop assault of combat and violence, alternately exhilarating and exhausting in the ways it finds to punish and annihilate the human body. In short, shit gets fucked up.

Uwais plays Ishmael, a man who, as the movie begins, wakes in a hospital bed having been shot in the head and going into a coma. He is cared for by Ailin (Chelsea Islan), a nurse how urges him to come to Jakarta with her. She does not make it to Jakarata, however, and is instead taken hostage by Lee (Sunny Pang), a gangster and surrogate father to a family of orphans he raises as savage killers. As Ishmael searches for Ailin, he begins to remember fragments of his own past and learns how he fits into the bigger puzzle. 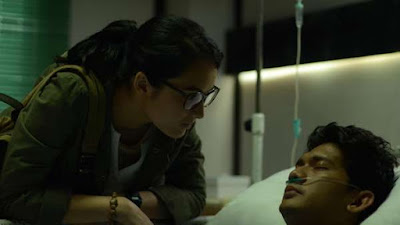 As a pure violent action spectacle, Headshot is very entertaining. Tjahjanto and Stamboel (who have collaborated several times under the name "The Mo Brothers") come primarily from horror cinema -- their combined credits include Macabre, Killers and the transcendently insane "L is for Libido" from The ABCs of Death -- and translate those sensibilities to staging action. There is a ferocity and brutality to the fights that creates the same emotional effect as a movie like The Texas Chain Saw Massacre; it doesn't create a similar sense of fear, but its sheer relentlessness is an assault on our eyes, our brains and, eventually, our nerves. The violence has the sudden brutality of a slasher movie. Unlike the traditional action movie, which can go so far as to mow down an army of adversaries only in the interest of moving the chess pieces forward and getting that much closer to the Big Boss, the bad guys in Headshot are taken out with a creativity that the camera relishes. It isn't just about killing bad hombres, but about doing it in new and spectacular fashion.

And because the fights are choreographed and performed by Iko Uwais and his team, you know they're going to be spectacular. The modern action movie, aided in large part by the influence of Asian cinema on the rest of the genre, has gotten so much better about showing us the actual actors doing the actual action, whether it's John Wick Chapter 2 or this or even Logan, which utilizes stunt doubles but does so in a way that's never distracting. I recently watched a movie in which all of the action was performed by doubles and it was some weak sauce because actors like Iko Uwais have ruined it for everyone else. I recognize that's a little unfair, like saying the every other guitarist sounds bad once you've heard Ace Frehley, but the point stands that it's hard to go so far backwards when Uwais is doing so much to push the physicality of the action genre forward. His work in Headshot is different from what he does in the Raid movies because here he's so often on the defensive. There's a real Jackie Chan influence in his choreography, even in the small touches meant to add levity to otherwise tense moments. There are sight gags in Headshot right out of Buster Keaton, and it's nice that a movie this grim and nasty isn't afraid to lighten up here and there. 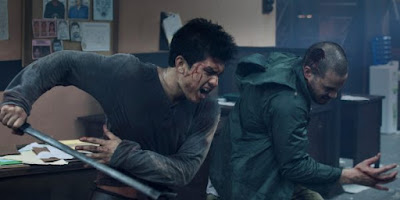 As impressive as some of the choreography may be, Tjahjanto and Stamboel don't always trust it to work on its own. Because this is their first foray into action, they have a tendency to shoot a little close at times and to shake the camera Greengrass-style to add kineticism. This is unnecessary. Iko Uwais IS kineticism. Shaking the camera during one of his fight scenes is putting a hat on top of a hat. Don't get me wrong: they shoot the action better than many of their American counterpart, letting the fights play out in long takes and trying to find interesting ways to stage the sequences. If their efforts suffer at times, it is mostly in comparison to the perfectly controlled, confident direction of Gareth Evans in the two Raid movies -- in particular the sequel, which has less action overall but a steadier camera. Comparing this film to those just because they share some of the same DNA is unfair, like getting mad at Mobsters for not being The Godfather.

Where Headshot really comes up short, though -- and for this it can be held totally accountable -- is in its script. There just isn't much of a story to tell here, and what little there is winds up formulaic and not very good. The relationship between Ishmael and Ailin is cute and holds promise, but might not be established enough to drive the rest of the plot. Ishmael's gradual realizations about who he is are so familiar -- he's Jason Bourne with an Oliver twist. The story beats are totally episodic in that he just moves from location to location, fight to fight until the boss level. Action movies don't necessarily need a great story or great characters, but though the truly great ones have one or the other or both. With neither to its credit, Headshot has to settle for being a movie that's just ok but with some action awesomeness. 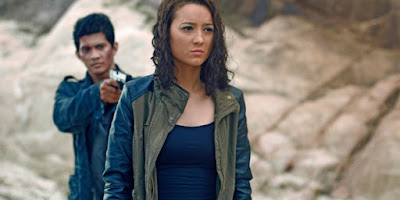 As an action fan, I wanted to love Headshot. I wanted it to be a game changer because I've seen just how explosively wild Tjahjanto and Stamboel can be. Instead it's just an average movie that has flashes of cool as hell fighting and some horror movie violence. I don't want to talk anyone out of seeing the movie -- especially you #HeavyAction fans, for whom this movie is pretty much made -- but just know what you're in for. I'm reminded of the original Transporter, actually: a good action lead and some inventive fighting strung together by questionable, outdated choices. By the time the emo ballad "Imposter Heart" kicks in at the movie's end, I realized that maybe these filmmakers and I don't share the same taste. Except when it comes to kicks in the head. We're on the same page there.

Got an action movie you'd like to see discussed in a future Heavy Action column? Let us know in the comments below!
Posted by Patrick Bromley at 5:00 AM