Nature Strikes Back: A Look Back at Day of the Animals 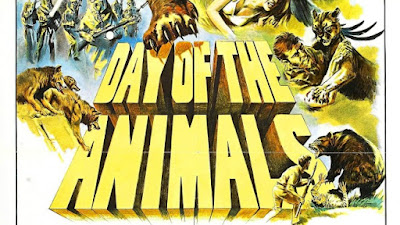 "God sent a plague down on us because we're just a bunch of no good fellers." - Sam, Day Of The Animals

In the mid-to-late 1970s, a genre-straddling subset of the already-popular disaster film emerged, focusing on attacks of nature in response to man’s global neglect. The eco-horror/enviro-disaster film subgenre gave us gems like The Swarm, Grizzly, Avalanche, Empire of the Ants, No Blade of Grass, and the film whose 40-year anniversary we celebrate today: 1977’s Day Of The Animals.

The plot is simple enough: the earth's ozone layer gets spread a bit too thin due to man-made pollution, which causes a sort of psychosis; specifically, the hole in the ozone allows high levels of UV radiation to permeate the atmosphere, which has the most devastating effect on anything living at the highest altitudes. Consequently, animals above the altitude of 5000 feet now go full Jason Voorhees on anything resembling prey in their vicinity. In the mountains of Northern California, a quarantine goes into effect, but not before a group of adventurous hikers get dropped off in the wilderness, above 5000 feet. With no way to communicate with the civilized world, their confusion at isolated animal attacks gives way to sheer terror when they realize something much bigger and more orchestrated is going on. Things go poorly as the group tries (and fails) to prevent infighting and tries (and fails) to avoid being slaughtered by jerk vultures and punkass wolves.

The film is directed my William Girdler, the same guy who made the eerily similar eco-horror film Grizzly (1976). The films are so uncanny in tone and plot (even sharing cast members like Richard Jaeckel) that Day Of The Animals is often mistaken as a sequel to Grizzly (it’s not). Boasting a sizable ensemble cast including Christopher George, Lynda Day George, Michael Ansara, and Ruth Roman, Day Of The Animals offered a smattering of characters befitting any '70s disaster film: the Single Parent and her Kid, the Expository Professor, the seen-it-all Guide, the Old-Timer, the Buxom Bombshell, the Young Disposable Couple, and the Privileged Asshole.

Leslie Nielsen (Forbidden Planet, Airplane!) quickly steals the film as Paul, the Privileged Asshole. From the first moment he shows up onscreen, he wastes no time in drumming up audience hatred against him. He repeatedly calls the indigenous guide “Kemosabe” and makes misogynistic comments to the women in the group. Today, he’d be the guy sporting a MAGA hat, insisting to the native that the Redskins logo is a “tribute” and that any offense taken is “PC snowflake nonsense”. The humans aren’t immune to the effects of the UV radiation, and they soon start to get aggressive with each other. As tensions rise and food rations dwindle, the already hyper-masculine Paul seems to be the most affected and he takes it upon himself to wax philosophical as he attempts to rape and murder his fellow hikers. His arc exists purely to demonstrate how quickly man can devolve back into beast, and like Mrs. Carmoody of The Mist, all it takes is a few hours in an “all bets are off” situation for him to flip that switch and descend into DEFCON 1 douchebaggery.

The major highlight of the movie features Nielsen going toe-to-toe with a humongous grizzly bear in a climactic fight to the death. Veteran animal trainer Monty Cox handled the cast of animals for the film, including Bart the Bear’s mother as the grizzly bear that confronts Paul the Privileged Asshole. If you can guess which other Girdler film this bear starred in, you win a free internet high-five.

This is a 40-year-old movie and as such, the effects are practical and, at times, laughable. As Nielsen fights this beast, it’s obvious that shots of an actual bear are intercut with those of a grown man in a bear costume, standing and wrassling with the guy from the Naked Gun movies. But as any fan of '70s horror knows, that’s all part of the fun, as is the creative stunts and carnage depicted when such things were really coming into their own during the turbulent decade. The hikers and townspeople are subjected to mauling and murder via hawks, mountain lions, German shepherds, snakes, a bear, and each other. Thankfully, there’s plenty of bright red corn syrup blood to spread around.

The swashbuckling musical score and cheap gore serve as a solid counterweight to the film’s hot-button message, delivered to an audience palate with all the subtlety of a bulldozer. Long before M. Night Shyamalan’s The Happening, William Girdler was using horror to suggest that, hey, maybe we should ease up on the pollution and aerosol sprays. Day Of The Animals succeeds in hammering home the point with several notably disturbing images and deaths. Notable among them is a scene in which the local sheriff finds rats swarming the leftover meat in his fridge. As he advances upon them, they jump onto his face and do what ozone-crazed rats do, in a hilariously bloody bit of Mother Nature’s wrath. Day Of The Animals may be PG rated, but it’s 70’s PG, which is like an alternate universe rating that allows for pretty gratuitous gore. In its 97-minute runtime, there are enough slashed faces and dead bodies to satiate audiences and thoroughly traumatize the children at the drive-in. 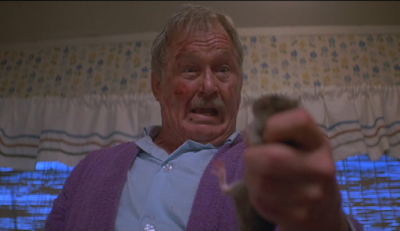 Environmental calamities are all around, and have been for ages. Then, the major worry was the ozone layer. Later on, it was oil spills in our oceans, and the plight of the whales. Now, it’s climate change and the disappearance of the bees. Recent events have made it clear that man’s contribution to environmental decline is still a grave global concern, and thus the resonance of eco-disaster films rings truer than ever today. Those of us who aren’t in the mood to watch another climate change documentary would do well to watch Day Of The Animals, which proclaims a similar finger-wagging warning…but with a shirtless Leslie Nielsen calling a bear a bastard.

Day Of The Animals is currently available on VOD and streaming on Shudder.