Am I too old for this shit?

In my early twenties, I went to many midnight movies as part of my regular filmgoing diet. Nowadays, I’m lucky to be able to stay up past 11pm and that bums me out. It’s like part of my moviegoing DNA has been removed.

The Music Box Theatre is the main source for midnight movies in Chicago, and their schedule usually includes some deep cuts and sentimental favorites that are as eclectic as they are fun. For years, I discovered a variety of cult cinema I had never experienced (Forbidden Zone, Jacob’s Ladder, The Room) as well as rushes of nostalgia from films I saw in theaters during my youth (Jurassic Park, Pulp Fiction, Speed). Part of the allure was going out around 9pm or 10pm, having a few drinks and enjoying a movie. Getting home around 3am was just part of the experience and almost always worth the grogginess that would come the next morning. There was almost always a story to tell either about the wacko movie you saw or the experience you shared alone or with friends in the hours leading up to the show. Shit sometimes goes down before a midnight. 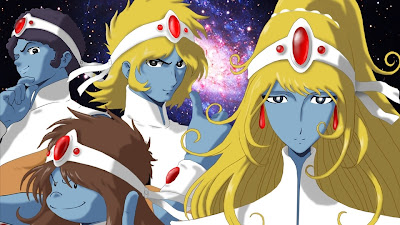 This week was one where I missed this past tradition more than usual. The midnight was Interstella 5555, an animated musical take by Leigi Matsumoto inspired by and featuring the music of Daft Punk’s 2001 album “Discovery.” Even if you haven’t seen the movie (which I hadn’t), you are probably aware of some of the musical sequences, as they were used as music videos for popular songs from the album including “One More Time,” “Digital Love,” and “Harder Better Faster Stronger.” It’s trippy, vibrant, exciting and strange – all the things a midnight movie should be. Because I’m an old man, I bought the film on Blu-ray and watched it on a Sunday morning at home. It was fun, but it would have been great in a dark theater with a killer sound system. But the most important thing it did was it awoke the sleeping midnight beast within me and provided a flood of midnight movie memories. Here are the top three. 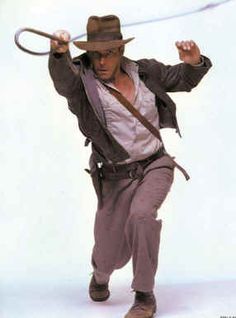 • One night, I went with a few friends to see a midnight of Raiders of the Lost Ark. I met up with them a bar about six blocks away from the Music Box Theatre. I knew everyone in my group that night except for one guy. He was a friend of a friend. And he was dressed head-to-toe as Indiana Jones with a whip. It was awkward because we were far enough away from the theater for the rest of the bar patrons to not know that Raiders was playing nearby and that he was dressed for that reason. To them, he probably just looked like some psycho who dresses like an explorer at a local dive bar. For the next hour or so before we headed to the theater, I was very aware of all the dirty looks and stares our table got. It was not the kind of bar where that sort of thing was cute. As we were leaving the bar, Indy took out his whip and started playing around with it, showing off. I knew this would not end well so I took a step backward. It didn’t matter. Motherfucker hit me (not hard, but enough to hurt) with his prop whip. F words were bandied about and I got mad and went home without seeing Raiders. The only way I can describe the sensation of being hit with a whip is demeaning. Dakota Johnson knows what I’m talking about. 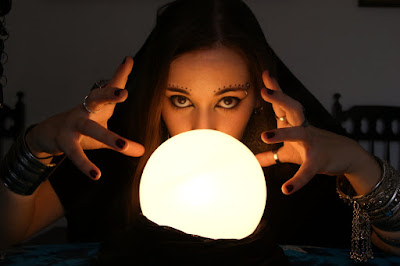 • Another example is before I saw Who Framed Roger Rabbit. I went to a fortune teller across the street from the Music Box on a lark. I had time to kill. $20 was paid and I got to ask three questions. I know one of the questions I asked was about relationships. I asked if a girl I liked was someone I would end up with. The fortune teller told me that I had a dark cloud of negative energy hanging over me and that this girl wasn’t the one. I said “How do I get rid of the dark cloud?” She said “You need special black candles, etc., etc.,” which really meant that she wanted more money out of me. I said “I’ll take my chances.” And guess what? I can honestly say my luck with women has been pretty lousy ever since. This is not a case where the fortune teller was wrong. She put a fucking curse on me or something. I had no idea while I was watching Roger Rabbit, but a defining moment in my life had occurred. Fortune tellers suck. She also told me in a past life I was a “toymaker.” I remember hearing this and being shocked, saying “Like Gepetto?” She didn’t smile because she knew my jokes were just exclamations from the recesses of the dark cloud that is my soul.

• The first midnight I ever went to was to see The Rocky Horror Picture Show, which is perfect being that it’s the most heralded midnight experience there is. The story of that experience was half-told in my “Date Night at the Movies” article from earlier this year. I didn’t mention everything. Here’s the other half.

When you go see Rocky Horror at midnight you might get asked by a cast member if you a “Virgin” (aka someone who has never seen Rocky Horror Picture Show before). I was on a date and since I had never seen the movie in a theater before (I had on video), I said that I was a virgin. I thought it would be more fun if my date and I got into the spirit of things. So the cast member marked my face with a “V” written in lipstick. Madness ensued. 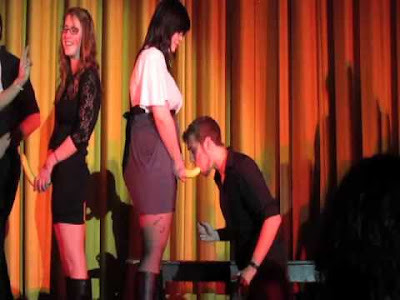 Before the show, the people who were there to shadowcast the film asked for any Rocky virgins. I took to the stage. It was me (age 23) and maybe four other guys, all who looked to be 18 to 21 max. They said to take off our shirts so that only our undershirts were showing. The other guys did but I hesitated. My counterparts were wearing the usual white Hanes shirt, but I was wearing a fucking wife-beater undershirt. Stupid mistake. I used to be a macho douche, you see, who liked to show off his muscles. Anyways, I was the only one with chest hair, too, so the fucking hosts really let me have it for that. I said (into the mic) “I’m Jewish. I didn’t have a choice.” Everyone was laughing at me and the cast was all like (in a mocking voice) “I’m Jewish. I’m Jewish.” Total nightmare fuel. But this was really happening. Then the fateful line was uttered by the master of ceremonies “Have you ever mouth fucked a banana, Bar Mitzvah boy?” I became immediately afraid. I looked out to the “Suck that dick!” shouting crowd and then to my date. She was yelling the same thing, I thought. I then had to go to my knees and a banana was smooshed into my face in a way I can only describe as like when a captor realizes they went too far humiliating the captive and then decides to shoot them to make that moment less uncomfortable everyone involved. I walked back to my seat as the film rolled, wiping banana from my face and buttoning my dress shirt. My date turned to me when I sat down and said she was yelling “No, don’t do it!” She laughed and I sighed because I hadn’t blown it. Figuratively and literally. Only at midnight, folks.

What are some of your favorite or weirdest midnight movie memories?
Posted by Patrick Bromley at 5:00 AM