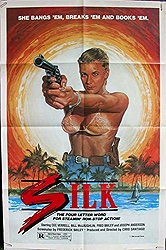 The '80s were a tough time for female action heroes.

The American action movie as we know it was more or less born in the 1980s, when guys like Stallone, Schwarzenegger, Norris and Bronson became household names known for singlehandedly wiping out armies of bad guys. Most of what I love about the genre found its footing in that decade, from the practically superhuman heroes to the massive levels of violence and carnage to the general excess of it all. The '80s were a good time for action movies. What they were not an especially good time for was turning women into action stars. The genre was a boys club in the '80s, and it would remain that way for too long.

What's weird is that the lack of viable female action stars represents a backslide from the previous decade, when exploitation movies were commonplace and, as such, plenty of action roles for women -- partly because exploitation was about representing an underserved audience and partly because these female-led action movies allowed exploitation filmmakers the opportunity to combine action with gratuitous nudity for even bigger box office receipts. From Blaxploitation icons like Pam Grier, Jeannie Bell and Tamara Dobson to one-off stars like Joyce Jillson, Sondra Currie and even Connie Stevens, the 1970s were great for female action heroes. The '90s saw Linda Hamilton made over as an action star in T2, as well as action hero turns from the likes of Bridget Fonda, Geena Davis, Demi Moore, Renee Russo, Sandra Bullock, Lori Petty and Pamela Anderson. The DTV market had its own female action stars -- not just Cynthia Rothrock, the best known of the bunch, but also Kathy Long and Mimi Lesseos. While still far from equal, things have improved significantly in the 2000s, as now there are a few dozen women -- including A-list Oscar winners -- who have headlined action movies; even better, several of them are leading their own hugely successful action franchises. Like I said, there's still a long way to go, but at least the field is a bit more level than it was 30 years ago. 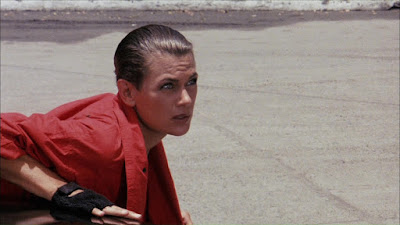 All of this brings us back to Silk, the 1986 action film headlined by Cec Verrell, best known to me for her role as Sandahl Bergman's muscle in Hell Comes to Frogtown. She plays Jenny "Silk" Sleighton, a cop in Honolulu with a reputation for kicking much ass and taking down everyone who crosses her. She and her partners eventually meet their matches when they pursue a drug lord who is sneaking Asians into the U.S. by stealing the identities of deceased Hawaiian citizens. Silk is on the case! She's smooth! And comes from the butts of caterpillars! She's SILK!

Silk is produced by Roger Corman and directed by Cirio Santiago, one of the kings of exploitation who made literally dozens of movies in the 1970s and '80s. Most of his films were shot in the Philippines, including Silk. Though the filmmakers attempt to pass off the locations as Hawaii thanks to some unconvincing license plates, it's pretty obviously Santiago's country of birth and the place where he did the majority of his work. Both he and the Filipino exploitation industry are well covered in Machete Maidens Unleashed, director Mark Hartley's great follow-up to Not Quite Hollywood. The picture painted of Santiago in that doc is that he worked fast and cheap but also took a lot of unnecessary chances and regularly put his cast and crew in danger with the nightmarish shooting conditions on his sets. But he was prolific, and to a producer like Corman, all that mattered was that he could get the job done on time and on a very limited budget.

Here's the thing about Santiago: he's not a very good director. It pains me to say that because I have a lot of affection for the kinds of movies he made and for what he represents in the exploitation action genre -- if there was a Mt. Rushmore for cheap, shitty action movies, Santiago would for sure have a spot -- but the majority of his movies let me down in one way or another. Yes, they're full of gratuitous explosions and destruction and lots of violence, but it's all handled so artlessly that I never enjoy it as much as I want to. His movies have a tendency to just lay flat on the screen, clunkily paced and edited for minimum thrills. I'm reminded a bit of Bruno Mattei, the Italian exploitation filmmaker who similarly works in genres I love but whose movies I don't. The comparison isn't completely fair, as Mattei is a genuine hack -- many of his movies are straight rip-offs of bigger movies like Aliens and Jaws (and I don't mean "rip-offs" in the traditional exploitation sense, I mean "rip-offs" as in "these movies can't really get distribution in the United States for fear of legal action") and he often worked with a shadow director (commonly his friend and collaborator Claudio Fragasso) because someone needed to know what they were doing. Santiago is a better filmmaker than Bruno Mattei, but I feel a similar sense of hopeful excitement and deflation each time I watch one of his movies. 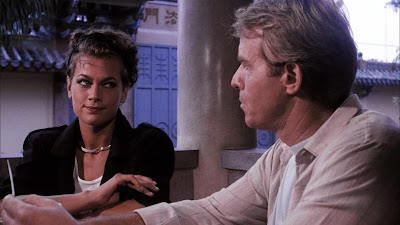 Silk is one of the more enjoyable Santiago movies I've seen, and it has everything to do with star Cec Verrell. With her slicked-back hair and near-permanent scowl, Verrell makes for a solid action lead, especially in the DTV class (even if this movie predates the true DTV movement). Her actual performance may not be anything special, though it is on par with the rest of the acting in the movie. No, what makes Verrell stand out is that certain thing that certain action stars have -- she looks the part, but even better she feels the part. It's the reason she's one of the most interesting characters in Hell Comes to Frogtown, too, making what is on the page a nothing role pop with the sheer force of her charisma. I'm not suggesting Verrell should have been a giant movie star, but I do think she should have had a bigger career in action movies. I wouldn't even want her to be in more mainstream stuff, necessarily. She carries Silk because it's just the right level of schlock for what she brings. A more polished film would have swallowed her up, but here she's really fun to watch.

Unfortunately, the film sells her out in the last act and has her kidnapped by the bad guys, in need of rescue from her wet white bread partners -- the same assholes who don't have a movie named after them and who don't get their own kickass theme song (it's seriously one of the best parts of the movie, written by Willy Cruz and credited on IMDb to "unknown female rock vocalist"). Why the fuck would I want to see a movie called Silk about the toughest, baddest cop in Hawaii and how she needs to be saved by a bunch of dumbfuck men? It's a total betrayal of everything that's special about the film. 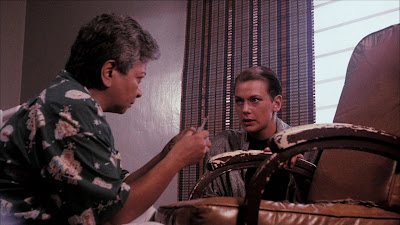 A sequel was made in 1989, Silk 2, with Santiago returning as director but Cec Verrell stepping aside and replaced by Monique Gabrielle, star of a bunch of "sexy" movies from the 1980s. I haven't seen Silk 2 and therefore don't want to pass judgment on the movie, but reading Gabrielle's credits make me suspicious that she was cast for reasons different other than the star power that make Verrell's turn as the title character so cool. Verrell never leads with sexuality even if she is very sexy; it's her fierce intensity and her total lack of bullshit that makes her such a compelling screen presence. It's too bad that she was mostly making genre movies during a decade that for the most part didn't appreciate women in action movies (yes, yes, I know, "But Ripley!"). Had Verrell come along in a movie like Silk just a few years later, I think it might have been the start of a new name in action movies.

While probably best suited for #HeavyAction diehards, Silk is the kind of action movie made for a Saturday afternoon at the video store in the '80s -- the kind where your parents let you pick out any movie you want and then left you unsupervised to watch it, blissfully unaware of the kind of trash that was chemically altering your brain. I love many of the titans of '80s action, but I also love discovering these also-rans that might not totally work but which feature one or two elements that set them apart for other films in the genre. In spite of (or because of?) the Philippines-for-Hawaii locations and the crass approach of Cirio Santiago, Silk is a solid example of low-budget action of the Roger Corman school of exploitation, primarily for its commitment to destruction and the presence of Cec Verrell. It's also one of those movies that existed mostly on VHS for years but was rescued in by Code Red, who put it on Blu-ray last year. Like with most Code Red releases, I'm saving up to someday own it and crossing my fingers it hasn't sold out or gone out of print by then. If you have any interest in owning it, I wouldn't wait too long.