It Came from the '80s: EXPLORERS 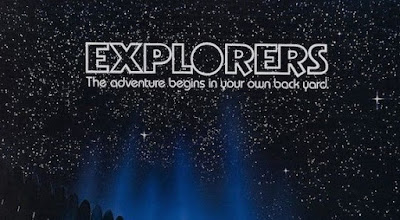 The great lost Joe Dante movie is one that actually got released.

As I've said many times before on this site, the great Joe Dante is, without question, one of my favorite directors of all time. My adoration for all things Dante stems more from the sensibilities found in his films: he loves the same old goofy horror and sci-fi films, the same pointed social satire, and the same dumb slapstick that I do, and infuses each of his movies with all of these elements. From The Howling, one of the best werewolf films ever made, to Gremlins – exactly the bastard cousin-of-E.T.-film that ‘80s audiences needed to wake them from their big Spielbergian hug (its sequel, Gremlins 2: The New Batch, was less cinematically relevant, but a superior film nonetheless), to the surreal genius of The 'Burbs, to Matinee – the culmination of all Dante's work to date, and one of my favorite films of all time – Joe Dante has been turning out small works of equal parts chaos, charm, absurdity, and nostalgia for over twenty years. 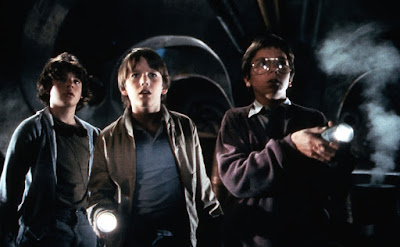 His 1985 film Explorers, represents the biggest missed opportunity in his filmography. It's not a bad film, but it is an unfinished one; Dante himself has said that Paramount moved the release date up during production to get it out in the summer of 1985 (a summer dominated by Back to the Future) and more or less took the film away from him, opting to release it as it was. The third act, as designed, had to be dropped and Explorers ends up introducing a bunch of ideas just as it has to drop them so the story can resolve and the credits can roll. The movie wasn't murdered outright, but it did have its legs chopped off from underneath it. The result is Joe Dante's most flawed and frustrating film.

Three adolescent boys, spacey sci-fi movie geek Ben (Ethan Hawke in his film debut), über-brain Wolfgang (River Phoenix), and loner Darren (Jason Presson), build their very own spaceship based on blueprints sent telepathically to Ben in the form of a dream. Once the ship is built, the boys begin to live out their dreams of flight – that is, until an unknown signal from somewhere in space begins to beckon them, leading them on an adventure they could never have imagined. 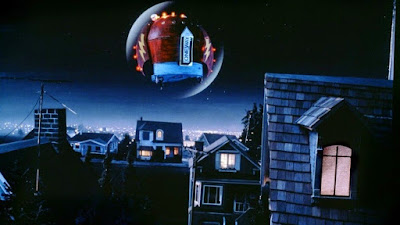 Explorers begins as one of Dante’s best films, and ends as one of his weakest. It’s his fifth feature, made after Gremlins had turned him into a commercially viable director, and it finds him trapped between his past and his future as a filmmaker. The storytelling is more mature, clearly showing off the kind of “inner child” sensibility Spielberg had mastered in the '80s (some of which Dante, having worked under the tutelage of Spielberg for much of that decade, no doubt picked up) and combining it with Dante’s usual in-jokes and sly references. It’s too bad, then, that he wasn’t able to resist his basest instincts – or, at least, find a better way to match the two styles, the way he would go on to do in films like Matinee and Small Soldiers. As it is, Explorers plays like a film divided – the expectations and excitement generated by an excellent first half are almost entirely undermined by outer space sequences that check their brains at the door.

The movie starts with great promise, as we meet Ben, an adolescent boy obsessed by late night black and white science fiction movies on TV, and who has daydreams about possessing the ability to fly or travel to outer space. He’s the kind of boy that some will instantly recognize – for those of us who didn’t grow up dreaming about the next Lebron James or Tom Brady, Ben’s fixations ring true. He’s the kind of boy I was growing up – and the kind of boy Joe Dante was, too. That identification – with the viewer as well as the director – is what makes the first two-thirds of the movie work so well. It’s Dante working with his fetishes at his softest; the wickedness of his previous movies has disappeared in favor of a kind of wide-eyed sincerity. Ethan Hawke, predating his eventual hipper-than-thou persona, is the ideal conduit for this sincerity: convincingly flakey, while still grounding the story in the reality of a kid who dreams of a life only known on the movie screen. It’s a wonderful performance, and for quite a while, Explorers casts a real spell. 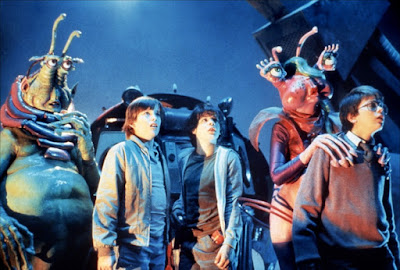 Then, an hour into the movie, something happens: the boys are taken aboard an alien spaceship, and all of the charm of the film is violently sucked away. The aliens reveal themselves to be bulbous, colorful muppets (designed by Rob Bottin) who are obsessed with American pop culture, speaking in nothing but catchphrases and well-known one liners repeated from television. There's an extended dance number in which the aliens lip sync to Little Richard's "All Around the WorldWhat was a movie about the magic of possibility becomes a movie about special effects and puppets, which all but destroys the mystery and wonder established by the first hour. The first time I saw Explorers, the shift felt a betrayal; it was as though Dante couldn’t resist the urge to exercise his Looney Tunes muscles, throwing in some brightly colored rubber aliens and a bunch of goofy sound effects into a movie in which they didn’t belong. I can remember watching it as part of F This Movie Fest a couple of years ago and the reactions from everyone in the community seeing it for the first time were just like my original viewing: surprise, confusion, and, ultimately, disappointment. And I got it. This is a movie that begins with the wonder and optimism of childhood fantasies and ends like getting zapped by a joy buzzer.

Many years and many more Joe Dante films later, I have a much better understanding of what the director is after in Explorers. He's not selling out the first half of the movie; he's pulling the rug out from under us, just as he always has. As much as my heart lies with the stuff about the boys building their ship and taking it for a test drive, it's the scenes with the aliens that reveals the truth about who Joe Dante is. He's a cynic at heart, even though his movies are rarely cynical. He sets up E.T. and then has E.T. turn into a slimy, violent gremlin. He introduces a bunch of cool talking toys and then has those toys try to kill their young owner. He takes a summer vacation with Tom Hanks out in idyllic suburbia and then drops him into a murder plot. Dante has made a career out of establishing premises we think we want to see and then twisting them back in our faces, subverting our expectations and forcing us to confront a reality that's a little weirder, a little darker and a good deal bleaker than we could have anticipated. He just disguises it with a lot of energy and humor. 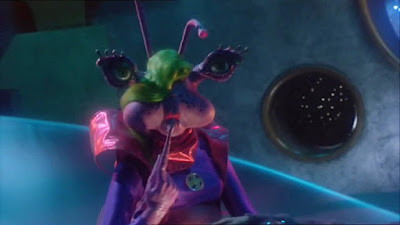 The disappointment of who the aliens reveal themselves to be isn't a lack of imagination on the filmmakers' part. Rather, Explorers becomes a film about the total defeat of imagination: traveling thousands of light years, discovering intelligent life, establishing communication, only to find that the aliens are really just TV junkies. We have come to expect movie aliens to be either vicious killers or highly enlightened creatures looking to pass their wisdom along; the aliens of Explorers are actually children who watch cartoons and Three Stooges shorts all day long. Whether they're meant to serve as a reflection of our own society or they're a commentary on Dante's pragmatic disbelief in a higher intelligence, the net result is a film with the courage to suggest that if aliens exist, they're probably just as shallow and stupid as we are. In Michael Singer's 1998 book of interviews A Cut Above, Dante says as much when asked about Explorers, suggesting it's a movie about a group of boys who go looking for God in outer space and do not find Him.

With a completed third act to put these ideas into better focus, Explorers might have been something very special. Through no real fault of Joe Dante's, it never came to be. There's so much about the movie that is right at home in the Spielberg '80s, so I get why so many '80s kids grew up loving it. But it's also a film that offers a pretty bitter pill; kids may not get it because they dig the fantasy of meeting aliens that talk on their level and like all the same stuff, but adult eyes recognize the disappointment of finding intelligent life that's lacking in any real intelligence. Leave it to Joe Dante to turn so many of the tropes of sci-fi and fantasy from the decade upside down inside of a movie that feels right at home in the '80s. The hobbling Explorers got from Paramount -- releasing an unfinished film into theaters to mixed reviews and less than half its budget in box office returns (it didn't help that it opened on July 12, 1985, the same weekend as the very first Live-Aid concert, which was attended by 100,000 spectators and watched on television by nearly two billion people in 150 countries) -- leaves it as...well, not a blight on Dante's filmography, but as his most mixed effort. The treatment both he and the movie received turn the message of Explorers into a self-fulfilling prophecy, and one that's still relevant today: get used to disappointment, kid. Life is full of it.