This is going to be a tough one to write, but this movie deserves a serious conversation.

Adam: Welcome to Reserved Seating. I’m Adam Riske. Rob will be back next week.

This week I’m reviewing Kathryn Bigelow’s ambitious new drama Detroit, which recounts the Detroit riots in July of 1967. The centerpiece sequence is a long retelling of the Algiers Motel Incident which led to the deaths of three black men and the beatings of nine others: seven black men and two white women. 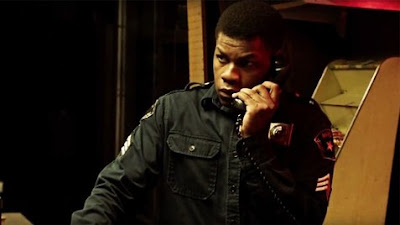 I’d like to first address the controversy around Detroit and then get to my thoughts on the film. A few writers and critics have questioned whether Bigelow and her writing partner of late, Mark Boal (The Hurt Locker, Zero Dark Thirty), are appropriate choices to tell this story being that they are white and not black. I understand and sympathize with these feelings but don’t agree with them. In my humble opinion (and only that), filmmakers should be able to tell whatever stories they want to as long as they treat the subject matter seriously. I’d argue that Bigelow and Boal do take the Algiers Motel Incident seriously in Detroit. It’s a slippery slope once we start deciding who can and cannot make a movie. Would Detroit be a better movie if it were told by black filmmakers? I don’t know and no one does, but on the other hand would Summer of Sam be better if it weren’t made by Spike Lee but instead by a white filmmaker? Don’t you think the black actors and actresses in the cast vetted Bigelow and Boal on their vision for Detroit and chose to do it because they had faith in these two Oscar-winning talents? Then again, I get that a white filmmaker showing white on black violence for a long duration on a big screen could be distressing in ways I could never understand fully as a white male writer. It’s an impossible situation.

Regardless of the race of the filmmakers behind the camera, the part that unsettles me about Detroit existing is because I don’t entirely know if it delivers the result that it is intending. From listening to an interview with Bigelow, Boal, and actors John Boyega and Will Poulter from the Charlie Rose show, the movie was made to bring more exposure to the parallels of what was going on in the ‘60s with what is happening today regarding police brutality directed at black men and women. That is always good (i.e. opening discussion) and I think the casting of Boyega (most popular from Star Wars: The Force Awakens) and Anthony Mackie (best known from the Captain America films as Falcon) is very smart. It helps get people in the door to see Detroit that might not have otherwise. If you’re young and you know these two actors as Finn and Sam Wilson, a movie like Detroit is sort of indirectly saying that any person of color could be victim to such mistreatment regardless of their standing within popular culture or community. Where I struggle is that the Algiers Motel Incident was made into a book but not a movie for fifty years. From what I read, this isn’t a story that was sought for development into a feature by other filmmakers, in particular black filmmakers. So why is it a good idea to do so now? What catharsis or justice could a reenactment of such a horrible event provide to the victims of the incident itself? I’m not singling out Detroit as the only movie to do this. In the past, I’ve taken United 93 to task for the same reason. But again, it’s an impossible situation, so let’s move on to discuss Detroit as a movie and not the matters surrounding the movie. 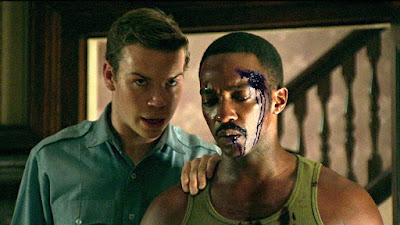 As a film, Detroit is powerful and crushing and made with expert level filmmaking skill. I am recommending the movie because the positives heavily outweigh the negatives (most of which are subjective feelings on my part and most I have already addressed). My only other criticism of the movie is the tonally off opening animation sequence, which is used to provide context to the “why” of the Detroit rebellion. The animation is more appropriate for a movie retelling the events of the The Crusades and not racially charged modern history. But whatever, that sequence maybe lasts three of the 143 minute running time of Detroit. On the positive side, the writing is strong, with an ensemble of characters mostly all getting time to develop personalities and make choices. The dialogue is smart. The production design, costumes and cinematography feel organic and never like playing dress-up and the film is edited and shot in such a way that it has an unsettling realism that consumes you as a viewer. Detroit is certainly trying to get a charge out of you and make you feel something, similar to a movie like Selma did so well and it absolutely works in that regard. Kathryn Bigelow is a masterful filmmaker and this is one of her best movies.

The performances, though, is where I want to give my most effusive praise. There is some truly extraordinary acting in Detroit. The aforementioned John Boyega and Anthony Mackie are quite good, as are Jacob Latimore, Jason Mitchell, Hannah Murray and Jack Reynor, but the two standouts are Algee Smith and Will Poulter. They give two of (if not the) performances of the year so far in Detroit. Smith plays Jerry Reed, who, at the time of the incident, was the lead singer for an up-and-coming soul group, The Dramatics. He is the heart and soul of the movie, playing a man whose experience changes him in an elemental way, all the more heart breaking because it’s his spirit that was beaten as much as his body. Will Poulter gives the performance of his young career as the racist ringleader of the evil police officers. I’ve seen him (and been impressed by his work) in films like The Revenant, but this is another level entirely. I give him so much respect for exposing all of the ugliness of the man he is portraying and not trying to hold back in fear of it being uncomfortable or bad for his image. I would be more upset if he played this part cautiously instead of just warts and all. These two guys make Detroit worth seeing unto themselves. 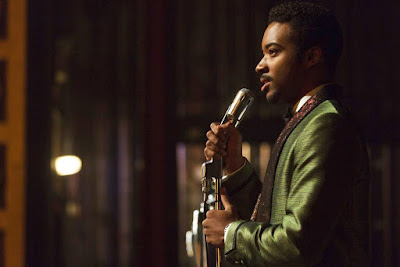 I’m going to vote Mark Ahn for Detroit. I strongly recommend you see it and discuss it. It left me shaken in ways that few films do, but in a way I think is justified. Join us next week as we’ll review Annabelle: Creation, the supposedly vast improvement sequel to 2014’s Annabelle, which I was the only person who liked. Until next time, these seats are reserved.
Posted by Patrick Bromley at 5:00 AM