20 Years Later: FIRE DOWN BELOW 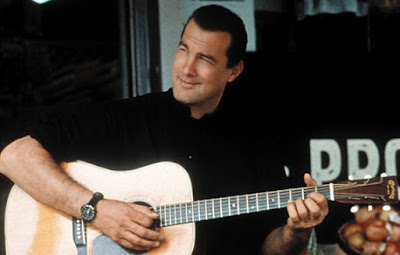 Two weeks before Wishmaster, another guilty pleasure of mine premiered.

I just watched Fire Down Below for the second time ever this past weekend. I saw it originally in early 1998 on video and was caught off guard by how much I was enjoying it. I went into watching Fire Down Below with bottom of the barrel expectations. At that point, I had written off Steven Seagal, who was coming off a string of lesser movies and losing the shine he had with his home studio, Warner Bros. What I got was this sweet southern romance with action scenes around the margins. I’ve said in the past that I am a big fan of the “going country” action movie that seems to be a signpost in most action heroes’ careers. Statham had Homefront, Van Damme had Nowhere to Run, Schwarzenegger attempted a comeback with The Last Stand, etc. Seagal’s Fire Down Below is no exception. By slowing things down a bit (compared to their “city” fare), these going country action vehicles show a humbler, lower-key and often more likable side to many action stars. Lucky for me, Fire Down Below is just as charming as I remember it being and stands as maybe my second favorite Seagal movie (ducks for people throwing vegetables) after Under Siege. 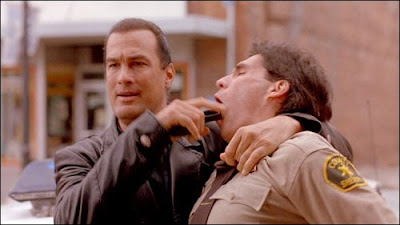 The movie starts out rather silly, with a truncated debrief sequence over the opening credits that sets the action into motion. Seagal plays Jack Taggart (great lawman name), an EPA agent who sets out to Kentucky to avenge the death of his friend who got in hot water with the toxic waste-dumping henchmen of a kingpin named Orin Hanner (Kris Kristofferson, having fun but not in the movie enough), who lords over the area. Taggart tries to acclimate himself with the townspeople by fixing porches and steps and dropping in on church services. A bit of unintentional comedy in Fire Down Below comes from how many folks need carpentry skills from Taggart. Seemingly everyone has a roof, a porch or some steps that need some tending to, with Seagal’s friendship as a fringe benefit. One of the lucky recipients of Taggart’s greatness is Sarah Kellogg (played by Marg Helgenberger), who has a dark history of her own and thus is the town outcast. Sparks fly between Taggart and Kellogg and before you can say sweet tea, Taggart is buying Kellogg’s honey (she literally makes honey) at the general store, she’s cooking him a meal and they’re the hot new couple at the town dance. This time it’s not just about the environment (see On Deadly Ground) for Seagal. It’s about love, and that gives Fire Down Below some heart and stakes that some of his post-Under Siege films lacked. 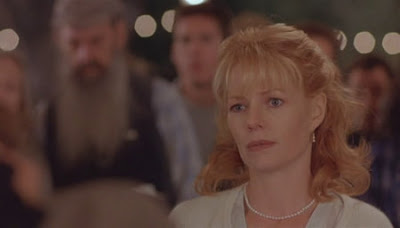 I’ve never had much of an opinion on Marg Helgenberger before, but in the wake of Fire Down Below (and me being close to the same age now as she was when she made this movie), I’m full-blown Helgencrushing. Like, this is a good woman. She’s the type of lady that makes a house a home, know what I’m saying? In the movie, her character Sarah Kellogg is a damaged woman in large part because of her nefarious, pervert brother (played by Stephen “Slang” Lang, and no one does nefarious like Slang) and I, as a viewer, got that “knight in shining armor” feeling where you just want to protect her and be good to her. I think that’s part of the reason why Seagal is more charming here than he usually seems – because he’s sort of the audience conduit. He’s not the “other,” as Patrick has described in the past in relation to some action heroes; he’s more relatable because he’s seeing the same thing we are and that’s Marg “there’s nothing more fetching than a bruised ego on a beautiful angel” Helgenberger. Shit! That girl fine. Makes me want to spend money at Home Depot and fix up her house to earn her love just as much as Jack Taggart wants to. #DJWon’tYouPlayThisGirlALoveSong 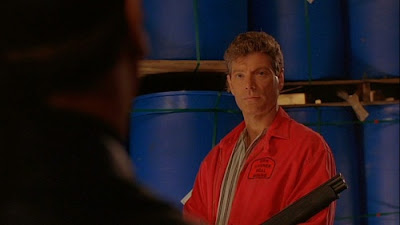 Surprisingly for a Steven Seagal vehicle, there is very little action in Fire Down Below compared to some of his other films. You get a handful of hand-to-hand combat moments that are fun because he’s beating the shit out of some good ol’ boys at the lumber yard (every movie improves when there’s a scene at a lumber yard) and a high speed (?) chase between a Mack Truck and Seagal’s rusty old Appalachian pickup. It’s a fun chase because it ends with what must be a real Mack Truck falling off a cliff and smashing into bits and pieces. It’s practical, old-school action and it rules. On top of an action movie, Fire Down Below is quite the Seagal vanity project, which resulted in the stupid fuckers at the Razzie Awards nominating it for Worst Picture, Worst Actor, Worst Screen Couple (for Seagal and his guitar) and Worst Original Song (with Mark Collie, who also plays my favorite henchman in the movie). Fire Down Below puts to use Seagal’s musical prowess, expert marksmanship with his gun (this was a big deal on the episodes I saw of the Steven Seagal: Lawman television series) and southern aw-shucks dialect. One of my favorite things about Seagal (ironically, in this case) is that he always adopts the dialect of the person he’s talking to, so in Fire Down Below he’s all “M’am” this and “You Boys.” It’s charming in a way and completely embarrassing also. Speaking of embarrassing, if you can tell me what Harry Dean Stanton is going for in this movie, please leave a comment. At first he’s a simpleton, then he’s a mole for the good guys, and then at the end (when the movie is pretty much finished from a story perspective) Stanton returns to dance a weirdly-shot jig and sing part of a song. I mean, sure, why not?

I’ve been recommending a lot of “bad” movies this year, to the point that I’m worried that my singing their praises will cause you to watch them and further call into question my taste and credibility, but I simply don’t care anymore. If it looks like fun and feels like fun then it’s fun, and Fire Down Below is fun, 11% Tomatometer be damned.