With a Bullet: The Search for #5 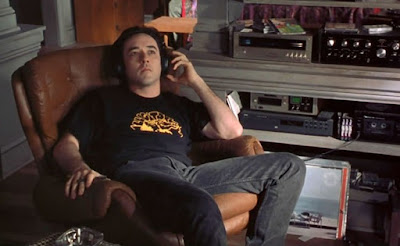 Because there’s no room for nuance in a list-based world.

Making lists is very satisfying. Organizing things into a pile and ranking them based on their relative value sends a rush of dopamine toward wherever dopamine goes (I am not a scientist) and helps of make sense of the chaos of the universe. It forces us to decide exactly what a particular item means to us using a very personal system of qualitative judgment. And no matter how much education we’ve had in a field, that system always comes down to our particular taste. My Top Five Movies, for example, aren’t my choices for the best movies of all time. Only The Pope of Film is qualified to make that list. Mine is subjective. They’re the films that have soaked into my bones and come to define me as a human being. I’ve got the first four down: Jaws, Back to the Future, The Silence of the Lambs, and The Princess Bride are my Top Four, for sure. But since Western society is built on base ten — making “top four” sounds absolutely ridiculous — I need your help selecting #5. And bear in mind that while films like Star Wars, Pulp Fiction, Jurassic Park, and Die Hard are incredibly important to nearly every thirty-something white male cinephile, they don’t necessarily feel unique enough to me to put on this list. With that in mind, I present these candidates for my official Number Five: 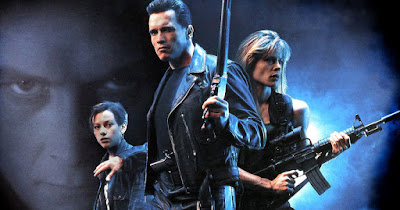 Seeing this on the big screen last week was the impetus for this column. For a long time, this was my all-time favorite. It was the first film I ever owned on VHS and the first indication that my parents trusted me way too much when it came to making my own decisions about appropriate viewing. I’m not embarrassed to admit that I saw it before I saw The Terminator or that I’ll always prefer it to that (probably superior) film. What I love most about T2 is that it keeps growing with me — as a seven year-old, I loved the cool action and special effects. As an adolescent, I found solace in John Connor’s anger with the world and his search for a father figure. As an angsty teenager who read Kurt Vonnegut and Hunter S. Thompson, I championed its bleak deconstruction of the human condition. Now, as a father and teacher, I find it to be a defiantly hopeful film about humanity's eternal potential for good. Furthermore, the sound design is etched into my brain: I hear Arnie’s grenade launcher’s thunk and the T-1000’s insect-like screams in my sleep, and Brad Fiedel’s iconic score will haunt me as long as I live. 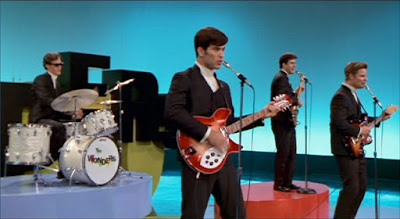 Tom Hanks’ directorial debut is a rare Perfect Movie, a tonally-succinct and flawlessly edited warm blanket that — pun absolutely intended — never hits a false beat. While Roger Ebert’s original review referred to it as “inconsequential,” its ability to celebrate an iconic period in American culture without lionizing it beyond recognition keeps it engaging and watchable more than twenty years later. The characters are delightful, authentic, and deeply flawed in all the right ways. Lenny is the fool. Jimmy is the talent. Faye is most definitely special. It’s a film that knows exactly what it means to love music and how to get the most out of its ear-worm title track: note that it’s only played in its entirely three times, signaling the rise, peak, and fall of The Wonders. I generally shy away from referring to a film as “endlessly quotable,” but there’s rarely a day that I don’t think of money as “presidential flash cards” or recall the moment Guy asks Faye when she was last Really, Truly, Good and Kissed. Most of all, That Thing You Do! was my major inspiration for picking up the drums after a few uninspired years as a guitarist. “I Am Spartacus” is still my warm-up routine. 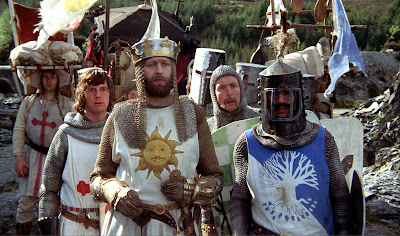 If there’s a funnier movie, I’ve never seen it (and sorry, it isn’t Airplane). This was another one of my earliest VHS experiences and a regular staple for me and my dad on Friday nights (usually followed by baseball or MST3K). It would later be in heavy rotation in my college dorm room, where it was fundamental in alienating me and my roommate Drew from any girls who wandered in hoping for conventional entertainment. (Note: I am not suggesting that there are no girls who like Python. We just couldn’t find them.) No single text is more foundational to my sense of humor than this absurd and idiosyncratic romp through Arthurian legend, and no other film gets me laughing just by thinking about the opening credits. In fact, it’s very difficult not to just turn this section into a bullet-pointed list of the film’s best lines. Its low-budget sensibilities and endless references to YOU KNOW WHAT? Screw this. I’m just going to create a little space for you to visualize your favorite moments from the film. Enjoy: 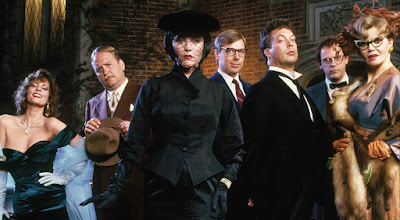 Two Jonathan Lynn films were on my original draft of this list: Clue and My Cousin Vinny (No joke: I didn’t realize Lynn directed two of my favorite comedies until about a year ago). While I saw My Cousin Vinny first and still maintain that any list of the best American comedies has to include it (#SorryPatrick), this is a personal list outside the normal purview of critical acumen. With that in mind, I’m going with Clue. Here’s why: My Cousin Vinny was one of four VHS tapes I was allowed to watch when I visited my grandmother — The Pagemaster, Mrs. Doubtfire, and Jurassic Park were the others. Those trips to my grandmother’s were really special because she made an effort to spend actual time with me and seemed genuinely interested in what I had to say. It meant a lot. Some years later, when I called her with the news that I had gotten engaged, she began screaming, insisting that I was a piece of shit who had nothing, was worth nothing, and would likely be nothing forever. I cried harder than I ever had before, concluded that love was fleeting, and haven’t talked to her since.

On the other hand, my memories of Clue are all about me and my best friends cackling at the top of our lungs at Tim Curry, Madeline Kahn, and the rest its brilliant ensemble cast. I loved seeing Doc Brown play a scumbag. I loved trying to catch the little variations in behavior that led to the multiple endings. I loved the way Clue flowed, the way its staging and dialogue gets more and more frenzied as it builds to Wadsworth’s tour-de-force final exposition. The screenplay (by Lynn and John Landis) is like a Jenga tower built to rise and fall in infinite variations forever. It’s just brilliant. I once even designed a house in The Sims based on the mansion from Clue, complete with hidden hallways and trap doors. You know what? I’m beginning to see why my grandmother hated me. Anyway. Moving on. 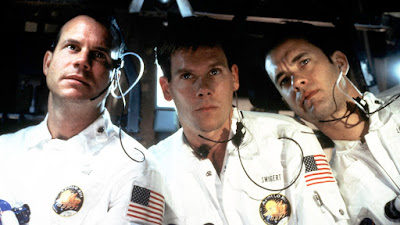 Another Perfect Movie starring Tom Hanks. This one, though, spoke to the ten-year-old Rob who still saw good in the world, the one who reached for the stars and truly believed in the ultimate triumph of human ingenuity. I know this movie backward and forward. I used to build Saturn V rockets out of Legos and dream that one day I’d get to stand in a control room with a headset on and make history. Oh, no. I was never the astronaut in my fantasies. Fuck that shit. I’m afraid of speed, fire, tight places, and pretty much every accelerated transportation of any kind. I’m not any good at math, either. And my science bonafides are for shit. I just wanted to be the guy who stood at a monitor and weighed the odds. The guy who looked at the person next to him and nodded solemnly. The guy who helped his friends figure out how to make This fit into the hole for This using nothing but That. The guy who trusted and was trusted in return. I love Apollo 13. I love the way the smartest people in the world gathered into one place and solved a problem. I loved the way three desperate men put aside their personal bullshit and looked after each other. I love the way it makes the smallest details feel like the end of the world. Because they are. Life is in the details, and we need to trust each other enough to get them right.

So, what do we think? Any thoughts about any of these? Any alternatives? Which one did I make the best argument for? My life is in your hands!
Posted by Patrick Bromley at 12:00 PM

Email ThisBlogThis!Share to TwitterShare to FacebookShare to Pinterest
Labels: apollo 13, clue, monty python and the holy grail, rob dicristino, terminator 2, that thing you do, top 5